Rick Nash has always been a solid penalty killer, a legitimate threat to provide offense even while down a man. Over his career, Nash has 20 shorthanded goals, with three already coming this season. Nash is so efficient on the PK because he has that rare combination of hockey IQ and skill. He uses these to anticipate passes, disrupt passing lanes, and generate odd-man rushes.

I’m a bit limited in my resources, since I’m basically just taking pictures of my TV as examples, so I only have one example of when it failed (hence the double-edged sword). We know when it succeeds, as these are the plays that we see turn into rushes up the ice. But when it fails, it temporarily leaves him out of position.

As we see here from the Pittsburgh game, Nash attempted to jump the passing lane on Kris Letang: 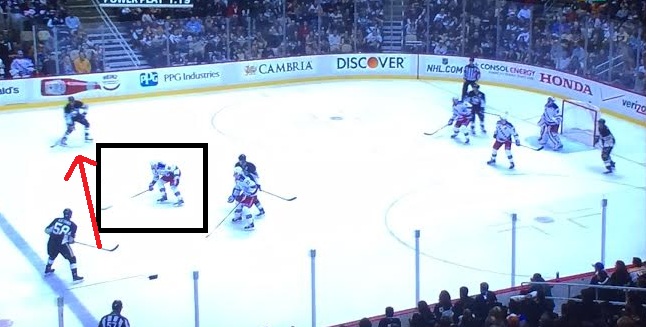 Nash’s attempt to jump the passing lane fails, and the pass (red arrow) gets through to the weak side point with a lot of room to operate. You’ll notice a standard umbrella for the Pens here, which has three guys up high and two down low. This enables that pass to get through to David Perron, which in turn leads to a temporary 4-on-2: 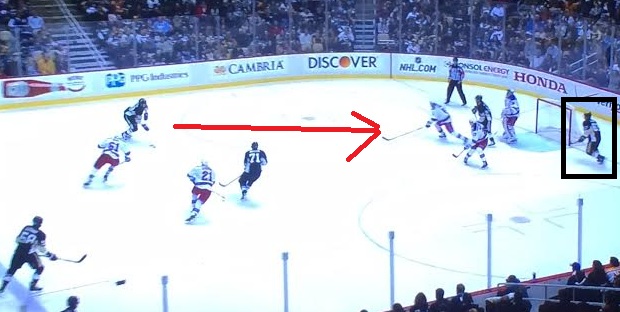 The reason why I chose this play is because it is an example of the extremes that can happen with an aggressive PK. Derek Stepan was covering the initial passing lane to Evgeni Malkin, which is why Nash was able to anticipate the pass to Perron. He just missed. Perron was able to walk the puck in with all that room.

Part of the onus on this goal is that Ryan McDonagh didn’t stick Sidney Crosby, likely because Malkin was able to roll off Stepan and get open while Dan Girardi had to move to Perron and leave Chris Kunitz open. There were a lot of coverage fails that stemmed from that one missed opportunity to generate offense a man down. On this particular play, the shot Perron took wound up generating a rebound that Crosby put home.

As with any aggressive style of play, there are pros and cons. The aggressiveness is why the Rangers are in the top-half of the league in SHGs with four (the Isles have eight, wow). But we can see where good powerplays can use that one or two seconds of Nash out of position to put the puck in the net, like the Pens did. The Rangers are in the top-half in PK% (82.4%), so the risk is clearly worth the reward.