Are the Rangers stable of centers among the league’s best? 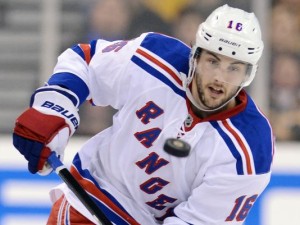 What was meant to be an organisational weakness has become a strength for the New York Rangers. Understandably, there is instant angst when Derek Stepan misses any game time because of injury and his absence certainly creates a hole in the line-up but the Rangers have to be delighted with the way the center position has developed this season.

A quick glance around the league and in terms of depth, the centers that make up the Rangers’ top two lines (so, Stepan and Derick Brassard) measure up against the best in the league. Only the all world double acts in Pittsburgh (Crosby, Malkin), Detroit (Zetterberg and Datsyuk), San Jose’s trio of centers (Thornton, Pavelski and Couture) and Stamkos and Johnson in Tampa are currently projecting to have at least two centers average higher points totals than Brassard and Stepan.

Also in the discussion are Dallas’ centers where of course Seguin has excelled, while they also have Jason Spezza. However to date, Spezza has underwhelmed in Dallas and has struggled to justify the salary he commands. Anaheim are another team that are obviously top heavy at center with Ryan Getzlaf and Ryan Kesler but both Stepan and Brassard have out produced Kesler to this point. LA boast an elite two way presence in Anze Kopitar, they have their well documented depth and they have Jeff Carter but the Rangers are more than holding their own when compared to the league’s very best in terms of production.

Brassard and Stepan have helped the Rangers powerplay climb to 11th in the league this season while Stepan has also been a big part of the Rangers solid penalty kill unit. In short, the Rangers centers are impacting games in every conceivable situation.

Beyond the top six and the Rangers can be excited about Kevin Hayes’s steady development. While several internet sources still list Hayes as a right wing, Rangers fans obviously know that he has been almost exclusively utilised as a center by the Rangers and in terms of rookie production only two rookie centers in the entire league have out produced Hayes to this point. Overall, Hayes sits 12th in rookie scoring yet averages the least ice time per game among those top 12 point scorers.

Delve a little further and without involving the fancy stat crew it’s fair to argue that the Rangers boast one of the best defensive, bottom six centermen in the league in Dominic Moore. Veteran Moore has been a calming presence and a lead by example type for the Rangers who has excelled through consistency, strong hockey IQ and has even chipped in a bit of offense. Moore has been so steady coach Vigneault hasn’t been afraid to match him against other teams top lines or use him on a higher line when needed.

It appears that the Rangers are well set at center especially when you consider Derek Stepan is 24, Derick Brassard is 27 (and tied down long term) and Kevin Hayes is just 22. The Rangers are young at perhaps the games’ most critical position and they have plenty of upside. Barring unforeseen events the Rangers are likely to be settled at the center position just like they are along the blueline which Sather recently settled with Marc Staal’s new contract.

Of course, the elephant in the room is that evaluating the Rangers at the center position also means discussing face-offs. There’s no getting around it that the Rangers need to improve significantly in the faceoff circle if their group of centermen are going to be talked about in the same vein as some of the other teams mentioned. Luckily, faceoff proficiency is coachable, certainly a lot more so than Derek Stepan’s vision or Brassard’s passing ability.

In order to get one step further than last year (as well as to be successful long term) the Rangers need to improve at faceoffs there’s no hiding from it. Only Moore – the oldest of the group – is proficient in this area with a 55% rate this season. The Rangers really need to give this aspect of center play some serious attention. If they do solve their faceoff issues, there’s no reason this position cannot be an absolute organisational strength.

So maybe the Rangers don’t have a 100 point, all world individual at center or even ‘just’ a point per game one. Although over the last three regular seasons Derek Stepan is averaging .825 points per game and did we mention he’s still just 24? I digress.

It’s worth noting that the Kings didn’t have a point per game center last season nor did they have one when they celebrated their first Stanley Cup two years earlier. In the cap era, depth is king and talent sits alongside depth at the top table. The Rangers have the depth and they have more than enough talent. If this group of centermen continue their current development trajectory and if the Rangers can sort out their faceoff struggles what was a perceived weakness will have become among the leagues best.