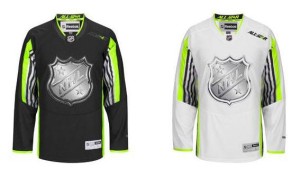 Perfect for a Post-Game Rave!

The All-Star selections came out yesterday, making it a huge topic of conversation since it’s been three years since the last All-Star game. Some basic facts to know about the game are that it’ll take place in Columbus this year, it takes place on Sunday, January 25 (two weeks!), and that each team has to have at least one representative there.

If you’re unfamiliar with the selection process, the first six players are selected by fan vote and the remainder is selected by a committee.  Keeping in mind that each team needs a representative will help you with this list of “all stars,” but it still doesn’t sit well with me.

The first snub is obviously Henrik Lundqvist. I almost didn’t want to write about it because it means this really happened, but I guess it did. If many non-Rangers fans are stumbling upon this blog for the first time, I swear this isn’t an act of homerism. Lundqvist is posting a .918 save percentage with 2.26 GAA, gaining his 20th win against San Jose last night. Compared to the two goalies who were selected as starters (not including Corey Crawford, who was fan voted in), Lundqvist is better than Sergei Bobrovsky (.914, 2.88 in two fewer games). Red Wings’ goaltender Jimmy Howard – who was injured in a terrifying incident last night, and we really hope he’s doing well today – has had a great season, posting a .920 save percentage with 2.11 GAA in 32 games this season.

Crawford was fan voted in, so unfortunately there isn’t much fans could do about that (except for vote more next year *clears throat*), and I think that Howard was a good pick. However, Bobrovsky is a joke. There’s a lot of discussion about the ASG being played in his home arena, so the NHL would want a bit more representation for the hometown. The Blue Jackets – having a disappointing season, despite the ASG being played there – already have representation from the committee in forwards Nick Foligno and Ryan Johansen. My short list of goalies that are more deserving than Bobrovsky to start is: Lundqvist, Predators’ Pekka Rinne (who was selected as a backup),  Canadiens’ Carey Price (also a backup), and Penguins’ Marc-Andre Fleury, who is having one heck of a season so far this year, posting 21 wins, a .926 save percentage and 2.16 GAA.

Equally appalling to this blogger is the exclusion of the following forwards, in no particular order: Sharks’ Joe Pavelski, Lightning’s Nikita Kucherov, Leafs’ James van Riemsdyk, and Jets’ Captain Andrew Ladd. The Lightning have representation from both Steven Stamkos and Tyler Johnson, so the exclusion of Kucherov is somewhat understandable, but it feels as though the deciding factor for the selection team was more “names people know” and not “guys who are having an actual studly year.” Does Foligno make a great Columbus figurehead to play in the game? Sure does. Did they need Johansen as well? Heck no.

The fan vote will always be a source of frustration for some fans, and a source of pure joy for others. It seems that the whole city of Chicago and the whole country of Latvia came out to support their team/Zemgus Girgensons, which is an impressive feat. However, is Brent Seabrook an all star? His numbers are nothing compared to Ottawa’s Erik Karlsson, who is having a terrible year by his standards with only 29 points halfway through the season. The new captain has been a source of ire and criticism from fans around the league, however when you look at the numbers and not the name, I’d sure like him in my defensive corps.

Which players are you happy made it? Which have you scratching your head? Will you be watching on January 25?