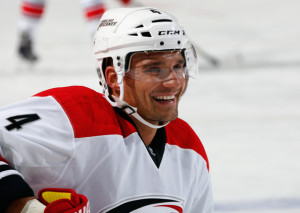 Per a transcribed interview with Elliotte Freidman on Calgary’s Sportsnet 960 this morning, the Rangers are interested in Carolina defenseman Andrej Sekera. Friedman notes that cap space is a problem, and that the Rangers are looking at this season as an “all-in” season. This confirms what Friedman said in November regarding the Rangers’ interest in Sekera.

Sekera would be a boost to the Rangers third pairing in place of John Moore/Matt Hunwick. He carries a $2.75 million cap hit this season, and the Rangers should be able to get him under the cap at the prorated amount ($1.375 million, since they would only be taking him for half the season. That number goes down as the calendar year moves on). Of course, the Rangers could move one of Moore/Hunwick to make room for Sekera, which opens up more cap space.

Sekera could also replace Marc Staal on the second pairing if Staal and the Rangers can’t agree to terms before the trade deadline.