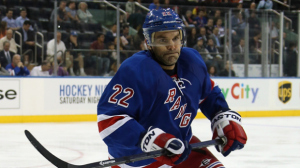 You know your team’s powerplay sucks when you can barely find clips of it in 31 games worth of highlights on the internet. I spent hours on the interweb for this post trying to find some highlights of decent powerplay scoring chances or big saves from opposing goalies. Unfortunately, they are few and far between. I guess that is the state of the Rangers man-advantage right now, not exactly YouTube worthy.

To date, the Rangers are clicking at 15.7%, which is good for 21st in the league. Unlike the last, I don’t know 15 years, the Rangers actually have some decent personnel to work with.  You’d figure with the career powerplay points between Rick Nash (203), Martin St. Louis (311), and Dan Boyle (283), we’d be able to muster up at least a 20% success rate.

Yet this season feels different, not only in personnel, but in execution. We’re no longer short right-handed shots. We’re no longer reliant on dump and chase hockey to gain our entries. We should be better at this, but for some reason(s) we’re stuck in mediocrity — again.

Here are a few things AV and Arnie need to fix.

1) Too much puck possession

In the old days, before Corsi or Fenwick stats, possessing the puck actually meant holding on to it rather than ramping up shot attempts. If there’s one thing I’ve noticed with this year’s power play it’s that the Rangers hold onto the puck too much. They need to ditch their old puck possession ways and embrace this new definition of puck possession (shots!).

If you look at the top teams in the league in PP conversion, none of them are in the bottom third of the league in PP shots. The Rangers are ranked 20th. It’s not rocket science. You have to shoot to score.

If you flip through the heat maps (courtesy of sporting charts.com) of where successful teams score goals on the power play, they’re usually not confined to one area. I grabbed the Penguins and TBL’s scoring locations (since they also run variations of the 1-3-1) and compared them to NYR.

You can see the differences pretty clearly. Those teams have scored from everywhere and it’s because they can put pucks on net from anywhere. This makes it much harder for opposing PKs to defend when you have to respect the fact that a team can score from just about anywhere. 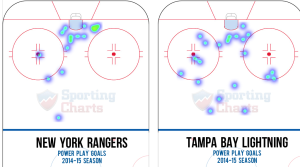 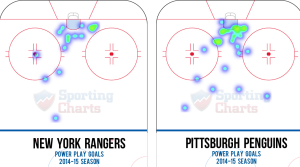 3) Change the point of attack 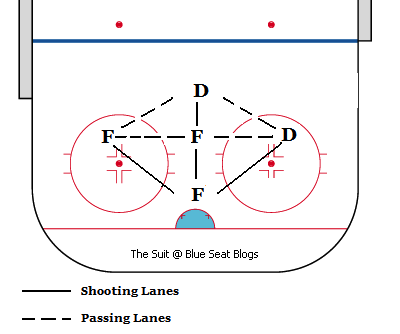 The Rangers aren’t the only team to run a 1-3-1 power play. Far from it. However, they seem to be the only team that quarterbacks it exclusively from the point, which defeats the purpose of its design.

The best part about the 1-3-1 is you can queue it up from multiple positions (points, either boards, or below the goal line using the slot forward). Changing the point of the attack will not only get us away from these predictable rightwing perimeter shots, but it will also force the PK to change their defensive structure which inevitably leads to blown coverages.

Whatever the coaches implement, hopefully the Rangers start to put a few away on the advantage soon. The easy part of our schedule is ending soon.