It wasn’t pretty last night, but the New York Rangers held on to a 1-0 lead for over 55 minutes en route to a blanking of the Carolina Hurricanes. For the second straight game the Rangers controlled all of the action, putting 31 shots on Anton Khudobin over the 60 minute contest. Cam Talbot wasn’t tested much, but stopped all 18 Carolina shots for his third shutout of the season.

The game itself was incredibly boring and was a prototypical “second of back-to-backs” for both clubs. The Rangers may have dominated play, but that’s because Carolina stinks. But when a team wins six in a row, you can’t really complain much. I’ll take the points.

Mats Zuccarello gained the zone, then gave the puck to Derek Stepan behind the net. Stepan drew Justin Faulk to him behind the net, leaving Ryan McDonagh free to back up the play and head to the slot. Step put the puck on McDonagh’s stick, who beat Khudobin low glove side. Jeff Skinner didn’t pick up McDonagh trailing the play in the neutral zone, and Faulk should never have been behind the net on the play. 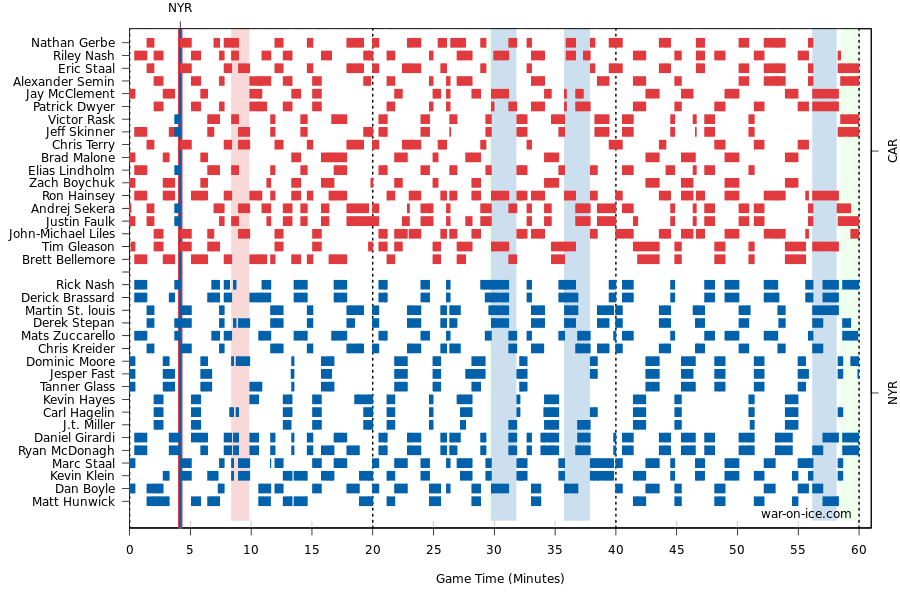 With the last change in this game, Alain Vigneault decided to match his top defensive pairing of McDonagh-Girardi against the Jeff Skinner line. That’s not surprising, since Eric Staal has been a shell of himself this season. Staal wound up being matched up against his brother Marc (DRINK!) and Dan Boyle.

Aside from those defensive matchups, AV generally deploys his forwards pretty freely, based on zone. Dominic Moore-Jesper Fast-Tanner Glass will get more defensive zone starts, but we know that already. 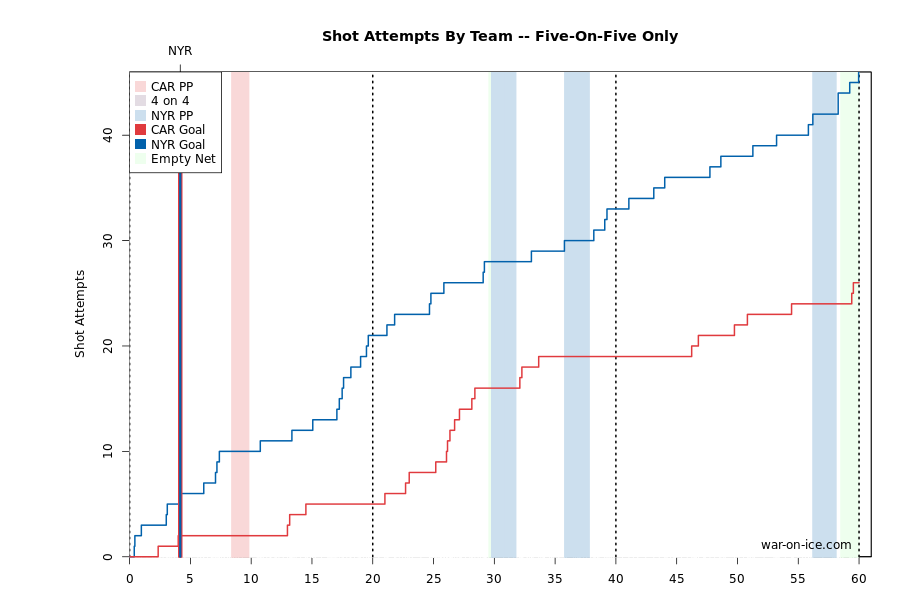 This game wasn’t even close from the start. Khudobin made some nice saves, and both games were closer than they really should have been. But don’t be fooled, the Rangers controlled the tempo. 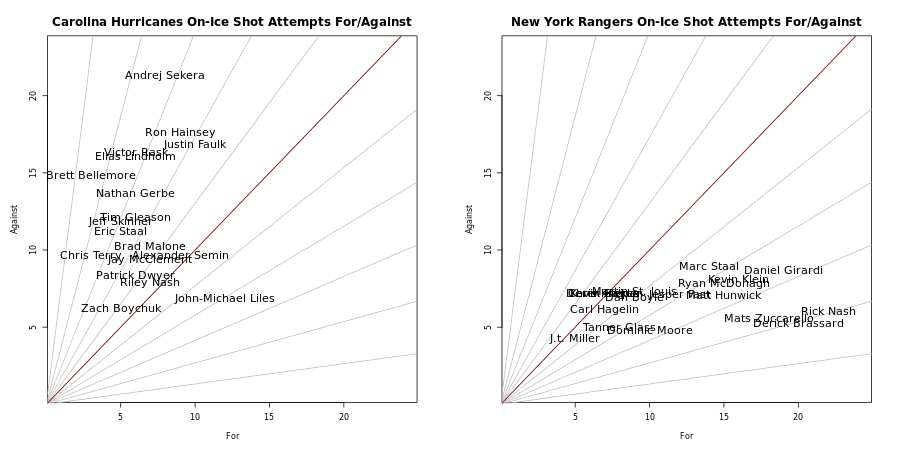 For these charts, you want the Rangers to be in the lower right corner for optimal performance. Anywhere on the right side of the diagonal median line is good too. All Rangers were around that point, so there’s not much to complain about here.

The Canes didn’t even get a dangerous shot attempt at all this game. That’s a product of a bad team and good team defense. Meanwhile, the Rangers generated a lot of shot attempts down low, with a lot getting on net too. All in all, you can’t complain with this distribution.

As I said a bunch of times, you can’t really complain with two wins over Carolina. Sure, they probably shouldn’t have been this close, but it’s still four points, and a six game winning streak with a big game against Washington coming on Tuesday. A win there would be an excellent Christmas present heading into the break.