Part 2: Why the Rangers chose Dan Boyle over Anton Stralman 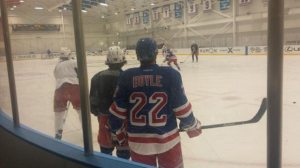 In case you missed it yesterday, I was asked why the Rangers kept Dan Girardi over Anton Stralman. After going into qualitative (eye test) and quantitative (#fancystats) analysis, comparing Girardi to Stralman, it was clear to see that Stralman was always the better choice. However, one thing that was not as clear was whether the Rangers actually chose Girardi over Stralman. It’s something I noted in the last line of that post:

It’s worth noting that I think the Rangers chose Boyle over Stralman, and wanted to keep Girardi regardless.

It makes sense that the Rangers didn’t want to deal their captain (Ryan Callahan) and another leader in Girardi that would be given the ‘A’ following the eventual buyout of Brad Richards. So, keeping Girardi was always, in my eyes, in their plan. However, keeping Girardi did not address the obvious need for a defenseman that could run the powerplay. With Dan Boyle on his way out in San Jose, the fit was obvious.

At this point it became a choice of Boyle or Stralman. One a noted powerplay beast, the other a #fancystat darling who does the small things very well. However, Boyle was 38 years old, and Stralman had never really proven he could lead a powerplay. Since both were looking at $4.5 million price tags –although Stralman for three years longer than Boyle– the trade-off was simply one question: Who fills the bigger hole?

The biggest issue with the Rangers last season was their 18.2% powerplay. It looked lost at times, even after switching from an umbrella to a 1-3-1. That 18.2% was good for 15th in the league, but the top unit, with Rick Nash, Derek Stepan, Chris Kreider, –insert player here–, and Brad Richards manning the point was not getting the job done. The only reason why the powerplay clicked at 18.2% was because of the second unit of Mats Zuccarello-Derick Brassard-Benoit Pouliot, with two rotating defensemen, usually some combination of Girardi and Ryan McDonagh.

As for Boyle, his numbers were easy to get, so let’s compare the two using traditional stats (goals/assists) and #fancystats (Corsi/60 – shot attempts while on the powerplay):

There’s really no comparison here, Boyle is far and away the better powerplay guy, and we’ve already seen it this season. If Boyle could at least fake what Stralman did at even strength, this is a net win for the Rangers. That’s a big if.

Comparing across teams using #fancystats still has some tweaking to be done before we can do it with certainty. So some of this needs to be taken with a grain of salt. Also worth noting that some charts, specifically the player usage chart, came out wacky and incredibly misleading. So I’m just going to give raw numbers, something I prefer not to do just because charts are easier to follow. Anyway, here are the deployment numbers for Stralman and Boyle at even strength last year:

The raw Corsi% favors Stralman pretty heavily, and the numbers came out to a 172 shot attempt differential in favor of Stralman. That’s about two shot attempts per game that went NYR’s way over their opponents while Stralman was on the ice, comparatively to San Jose while Boyle was on the ice. The rest of the stats are pretty even. The edge here goes to Stralman, but barely.

Even Strength – Expected vs. Actuals (dCorsi)

Since we are using historical data for this comparison, we can use Steve Burtch’s dCorsi again. Remember that dCorsi uses expected Corsi based on zone starts, quality of competition, quality of teammates, and a few other factors comparatively with actual puck possession results to measure effectiveness. It can be used as a substitute for relative Corsi% when comparing across teams.

First let’s look at Stralman’s dCorsi last year which was at 6.55:

Even Strength – Effect on Teammates (WOWYs)

We covered WOWY’s in the Girardi/Stralman post, but this is how teammates perform when playing with Stralman versus without Stralman. The more bubbles on the lower right, the better. Upper left is bad. These numbers represent Stralman’s three-year stint in New York:

Now let’s look at Boyle during the same time period while with San Jose:

These numbers again favor Stralman, although it’s not by a country mile.

The Rangers made a massive upgrade on the powerplay with Boyle over Stralman. It’s as clear as day. We see it on the ice, with Boyle’s ability to get shots through, find open ice, and keep penalty killers honest. It’s something we haven’t seen in New York since Brian Leetch. The pure puck confidence is a breath of fresh air.

Even strength –where the majority of the game is played– is a different story. Using WOWY’s and raw data to compare across teams is a bit crude. dCorsi makes things easier, and that gives Stralman a massive advantage. However, remember that dCorsi measures results versus what was expected, it does not measure the best players in the league. It’s a way of finding diamonds in the rough.

Objectively, it’s very difficult to relate the massive difference on the powerplay to the –believe it or not– relatively minor difference at even strength. We still don’t have a way to really analyze that in one wholesale stat.

Subjectively, it looks like the move for Boyle will pay dividends for a team that has its Stanley Cup window wide open. The even strength difference isn’t as massive as some –including myself– initially made it out to be. But Boyle’s presence on the powerplay is a game-changer. While the ideal scenario was keeping Stralman and signing Boyle, the Rangers didn’t necessarily make a mistake by choosing Boyle over Stralman.