Why did the Rangers keep Dan Girardi over Anton Stralman? 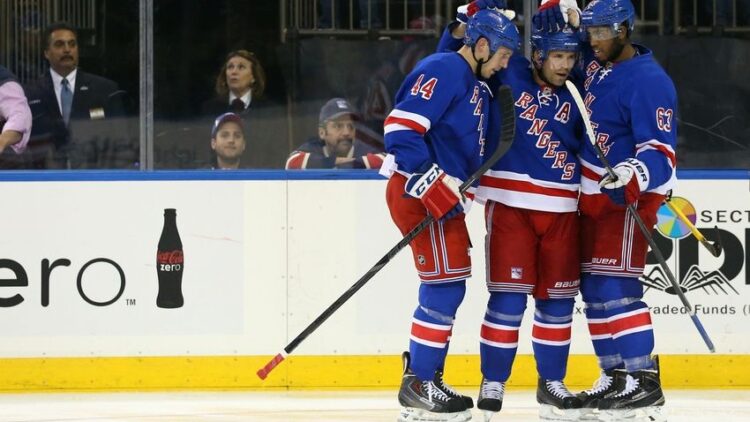 I received one question this week in the mailbag, and it was a doozy, so this entire post is dedicated to it. As always, email me if you have any questions, and I’ll be sure to address each one.

BrooklynVic asks: Why did the Rangers keep Dan Girardi over Anton Stralman? How could our valuation of Stralman been so undervalued considering how he is playing now?

BV, this is a loaded question, to which we can break it down into several parts. Addressing the first part is the easy part: Keeping Girardi over Stralman had a lot to do with perceived value versus market value, and the writing was on the wall when Stralman rejected the Rangers offer of three years, $9 million. The Rangers valued him at  $4 million, which is what Larry Brooks reported. That was $500,000 less than what he got from Tampa Bay over five years. The Rangers didn’t want to go that long or that high.

Another aspect was the locker room. Girardi is looked up to in the locker room, someone who is tough as nails and will play through anything. Girardi has missed five games in his entire Rangers career. Five. In seven full seasons and parts of two others. Five. That’s incredible, especially with how many shots he blocks. Dude is a cyborg.

When the club knew Stralman would walk, they signed Boyle to a two-year deal at $4.5 million (three years less than Stralman). Boyle reportedly turned down more money and years to come to New York. He’s been great on the powerplay, which is what he was brought in to fix.

Now let’s address that second part about valuation of Stralman, comparatively to Girardi, since that was the question. Stralman put up 1-12-13 at evens, while Girardi put up 3-12-15. The P/60 edge also went to Girardi. That’s the only edge that goes to Girardi through this entire analysis.

Stralman is younger, faster, and more offensively gifted than Girardi. Stralman rarely panicked with the puck, and always seemed to make the short, smart pass out of the zone, pushing the play up the ice. We saw the Kings continually attack Girardi during the Stanley Cup Finals, and it was then that those outside the #fancystats community started to notice that Girardi may not be the answer as a top pairing defenseman.

Going back to the cyborg aspect, hits and blocked shots are commonly looked at as positive stats. They show that added #toffness aspect that teams are looking for. Girardi has been among the team leaders in hits and blocked shots for quite some time. Stralman wasn’t a big hitter or shot blocker, but he had the biscuit a lot more than Girardi, as we will get to below.

One of the big things we noticed about Girardi is that he constantly feels the need to snow-angel on defensive plays. There are certain times when this is the only option, but it is risky since it takes a player out of the play completely. Plus, the need to dive on the ice to block a pass can sometimes mean the player is out of position or got beat bad. Success with your belly on the ice is mostly luck, but is almost always seen as a great play. Stralman, at least from what I recall, was rarely diving on the ice. This has a lot to do with foot speed and Stralman’s ability to stay with attackers, something Girardi lacks.

Getting into quantitative analysis (#fancystats), using their 2013-2014 even strength numbers (2014-2015 is too small of a sample size so far), it’s abundantly clear that Stralman was always the better player than Girardi. Let’s first look at the usage chart, courtesy of Hockey Abstract:

That’s Girardi in the upper left, and Stralman right smack in the middle. The chart may show that you want to give Girardi the benefit of the doubt, because he received much tougher minutes than Stralman, but Stralman’s ability to drive puck possession (darkest circle on the chart) really counters that. Ryan McDonagh drove puck possession –blue circle to Girardi’s red– and received virtually the same zone starts and quality of competition faced.

Breaking those numbers down a bit, Stralman played to a 56.54% Corsi (5.96% relative), which led the team. Girardi was at 49.93% Corsi (-3.94% relative). Girardi’s relative was second-worst on the team (Kevin Klein), and his raw Corsi was sixth of eight defensemen that played 500 minutes for the Rangers that season. You can use the above chart to factor in zone starts and quality of competition faced, which is required when looking at Corsi (never look at Corsi on its own, ever). Suffice it to say, Stralman comes out ahead here.

Stephen Burtch has been working on a new stat called dCorsi, which uses expected Corsi based on zone starts, quality of competition, quality of teammates, and a few other factors comparatively with actual puck possession results to measure effectiveness. It’s available on war-on-ice, and it’s something that we are going to start using once it becomes a little more readily available using in-season data. That said, the 2013-2014 data is readily available, and we can use this data to quantify all of the variables that influence puck possession (Corsi).

Girardi’s dCorsi was an astonishingly low -12.04 dCorsi. That is incredibly bad. Meanwhile, Stralman’s was at a team-leading 6.55. Visually, we can compare each player with their teammates:

We can also look at Stralman on his own (use the bottom portion, want to stay above that 0-line):

And Girardi on his own:

Again, this favors Stralman by a country mile. For comparison’s sake, Boyle posted a dCorsi of -0.7 last year. So Boyle, at even strength, is still a downgrade over Stralman.

We can also look at the effect of Stralman on his teammates using WOWYs (without/with you) on the ice. To read these charts, a player with a net positive effect will have more bubbles in the lower right part of the graph. A player with a net negative will have more bubbles in the top left. First Stralman (courtesy of Hockey Abstract), using his three years as a Ranger:

Another example of how Stralman positively influenced, and mostly carried some of his teammates during his stint in New York. Just ask Marc Staal. Boyle falls in between both players.

Obviously by now we realize that the Rangers made a mistake in letting Stralman walk. The team undervalued him, and it’s killing them at the moment. Keeping Girardi over Stralman has simply made that net result even worse, since Girardi doesn’t compare favorably to most defensemen around the league.

Signing Boyle has at least helped alleviate the departure of Stralman, but even with his powerplay prowess, we have to remember that the majority of the game is played at even strength. Boyle drives possession at even strength, but not at the level of Stralman. Right now we don’t have a measure of showing how the negative net result of Stralman->Boyle at evens is countered by the positive net result on the powerplay. Then again, Stralman appears to be doing just fine on the PP in Tampa.

The ideal scenario would have been trading Girardi for that “package for the future” that Glen Sather mentioned in an interview this summer (can’t find the link, sorry). There were rumors that Girardi was linked to Anaheim, which makes sense because they acquired Stephane Robidas after the Rangers re-signed Girardi.

After dealing Girardi, which would have been a big blow to the fan base because Ryan Callahan’s trade still would have gone down, the Rangers ideally would have used that money to re-sign Stralman. Boyle coming to New York still happens in this scenario, and the Rangers have an extra $1 million in cap space.

But, that did not happen. We have Girardi for the next five seasons after this one, all decline years, and Boyle for two. Meanwhile, Stralman is likely going to be an All Star this year with the season he’s having. It’s worth noting that I think the Rangers chose Boyle over Stralman, and wanted to keep Girardi regardless.