The New York Rangers followed up their strong performance and shutout of the Philadelphia Flyers with another well played shutout of the Montreal Canadiens. Unlike the game against Philly, this game was never in doubt. The defense was very solid again, with Henrik Lundqvist only needing to make 21 saves to preserve the shutout against a very hot Habs team.

Martin St. Louis was a wizard in this game, notching a goal and an assist. On the goal, MSL pick pocketed Alexei Emelin. For the assist, MSL gave a backhanded feed to Derek Stepan, one that we are still trying to figure out how he made that pass. Also kudos to Kevin Klein, who dropped the mitts with Brandon Prust after he ran Hank (although Prust did try to stop). 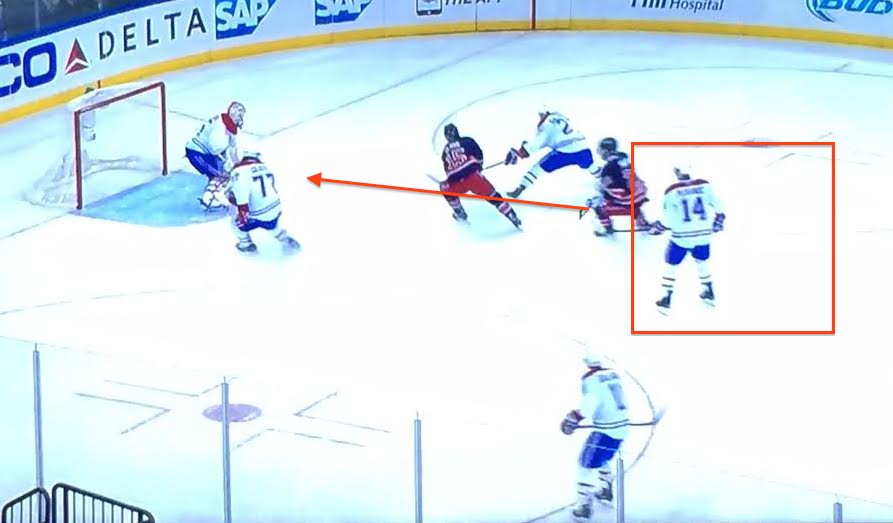 Dominic Moore actually lost the faceoff at center ice, but Jesper Fast jumped past the Habs to get to the loose puck before it could get to the defense. Fast got the puck to Tanner Glass before taking a big hit from Bryan Allen, who took himself out of the play. Glass took the shot on net and pressured Alex Galchenyuk –covering for Allen– on the rebound. Galchenyuk tried to get the puck away from Glass, but whiffed and it wound up on Moore’s stick at point-blank range for the tap-in. Tomas Plekanec was caught watching the play instead of sticking his man (Moore).

This was the absurd pass from MSL to Stepan. David Desharnais was tracking Chris Kreider instead of Stepan, which is why he was so open after the turnover. 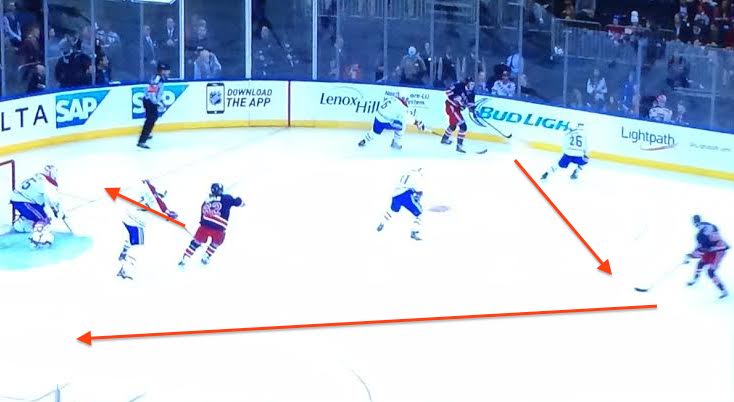 Couldn’t get a good picture on this one, but it was fairly straight forward. Rick Nash snuck behind the defense, and Derick Brassard hit him with a pass that sprung him for the breakaway.

Alain Vigneault decided to send Marc Staal and Dan Boyle out against the Plekanec/Galchenyuk/Brendan Gallagher line, and that one worked out pretty well. Meanwhile, he sent out Dan Girardi and Matt Hunwick against Max Pacioretty, David Desharnais, and Dale Weise. It’s always interesting to see how AV deploys his defensive pairings with Ryan McDonagh out.

The Rangers dominated from start to finish in this game. Even score effects didn’t skew this one, as the Rangers kept pushing even with a 4-0 lead. Perhaps the Habs just didn’t show up, but this was an embarrassing showing by them.

The Rangers are now at six straight shutout periods with two night off before traveling to Tampa Bay. It was the Lightning that embarrassed the Rangers last week, and you can bet the good guys will be building on these two wins to redeem themselves.