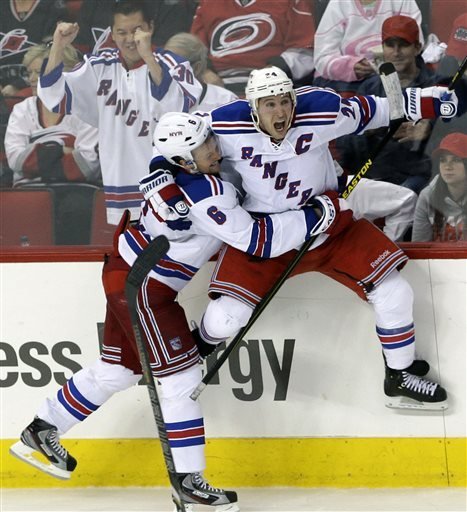 Tonight is just another game in the Rangers action-packed, though sometimes exhausting November, right? Sure, they’re up against the best offensive team in hockey, a team tied for second in points in the entire National Hockey League, so it’ll be a tough one, but otherwise, nothing crazy happening tonight at the Garden.

The talent here at BSB later today will post about what kind of special teams they throw and exactly who to watch for (spoiler alert: it’s still Steven Stamkos.. and Tyler Johnson, who you’ve probably never heard of), but this morning we need to focus on what MSG has been pushing for weeks, the big elephant in the room. Tonight marks the return of former captain Ryan Callahan, along with Anton Stralman and Brian Boyle, and much like ripping off a bandaid, I think we’ll all feel better once it’s done.

I’ll have to preface everything said here with a few facts: I was upset when Callahan got traded, but warmed up to Martin St. Louis. I thought that Boyle and Stralman would both go, and rightfully so, because the Rangers couldn’t afford what either was asking for. I wanted, if we could sign one of the two, to keep Stralman, who I think was consistently underrated as a Ranger. I also think that Ryan McDonagh needs some time to learn to walk in his Captain Shoes.. err.. Skates, and getting hurt hasn’t helped him one bit.

When the Rangers hired Alain Vigneault prior to last season, it marked an inevitable change in protocol. Gone were the days of our coach potentially having a heart attack behind the bench and going through training camps so notoriously hard that if you didn’t vomit, you weren’t doing it right. It was an adjustment and it was one heck of a successful season. As the season wore on, though, with an expiring contract, it became clearer that our shot-blocking, net-crowding captain could potentially be gone before the season ended.

Cally never signed a contract extension. The season wore on, followed by the Olympics, and then only a couple of weeks remained for management and agent to figure it all out. Of course, fans called each side greedy, as we are known to do despite having a fraction of the full details. The Rangers hosted their Casino Night benefit only two nights before the trade deadline, when I would imagine both sides knew that a trade was happening. In standard Captain Cally fashion, he was gracious and engaging with the crowd at a time when he very well could have been nothing short of a jerk. This behavior fit his personality as the Rangers captain for four years.

I can understand people not wanting to follow the Lightning now and not particularly caring how Callahan (or Boyle, or Stralman) are doing in Florida. I can’t understand why there would be any specific animosity towards any of these players in the present tense, especially if the Rangers pull two points tonight. Do I miss Callahan? Sure do. Am I glad we have St. Louis? Yup. Will Ryan McDonagh be a great captain? I believe (and hope) so. Did I leave my hair iron on? Wait…

Ryan Callahan was a stand up and wonderful captain for our club. He seemed to inspire within the locker room and was fantastic with media. He threw himself in front of shots game after game that could have seriously injured him, and he did so with no complaints. He handled the pressures of a big city market. The team has evolved, and has done so without him, but if you’re at the Garden tonight, you really ought to be clapping once Cally returns to his former home ice.