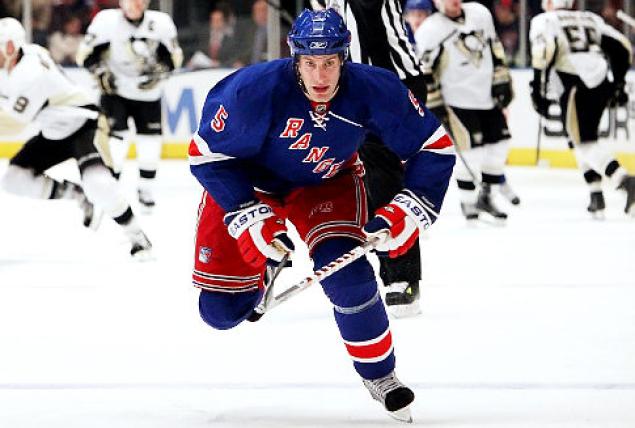 If you’ve been reading this blog for a while, you know that we like to combine what we see in the goal breakdowns with what we see in the stats. We are a bit limited by time constraints (thus no gifs or pictures of non-goal events), but we point out various areas where the Rangers have defensive breakdowns that lead to goals. While only pointing out goals is limited –If someone wants to pay me to do this full-time, I’ll gladly point out more plays. But I don’t have the time. So those of you complaining, quit it, it’s annoying and rather pointless– it is useful.

The defensive breakdowns are what we see with the eye test. And while the eye test should never be ignored, it does tend to focus on big screw-ups and lend itself to bias. It’s why defense should also be measured by two key metrics: One that we use regularly (relative Corsi) and one that we admittedly don’t use enough (Corsi Against).

Relative Corsi you are familiar with, as it measures possession on the ice relative to the rest of the team when off the ice. The concept here is that the higher the number, the more time you have the puck in the offensive zone, thus limiting opposition opportunities. Corsi Against measures shot suppression, which is a measure of relative Corsi, and shows us the shot attempts against while on the ice.

Shot suppression can help us determine if the eye test is accurate. The general rule of thumb: Stats supplement what we see on the ice, but if the stats don’t agree with what we see, we take a step back and re-evaluate the eye test. It’s worth noting that take CA in the raw is a lot like taking raw Corsi data: It’s flawed. You need to consider quality of competition faced and zone starts as well. Without these other factors, you are getting flawed results.

Starting with the defense, we can check out their deployment (zone starts on the x-axis, quality of competition on the y-axis): 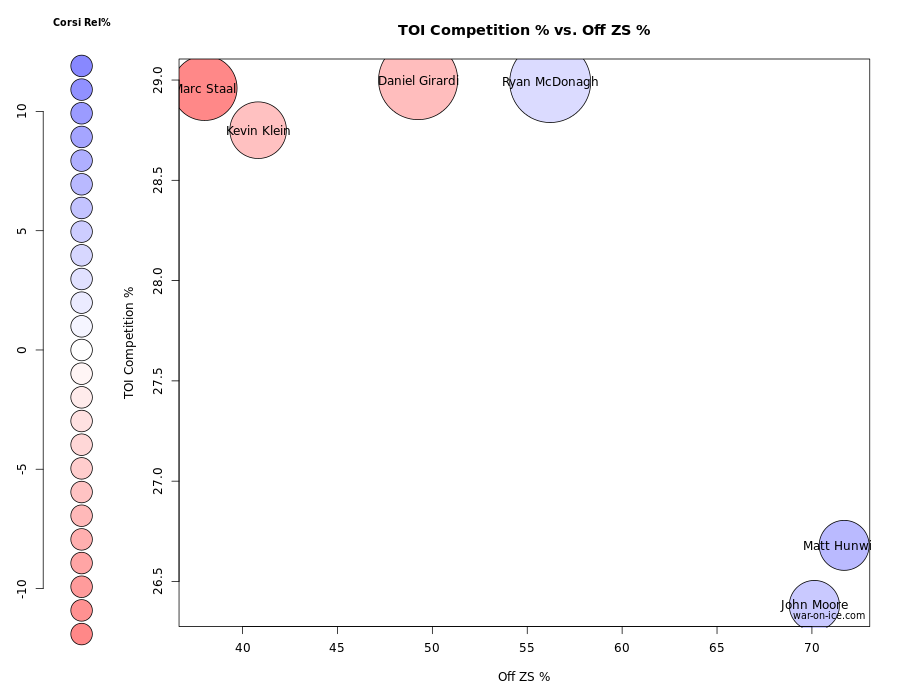 From this, we can conclude that John Moore and Matt Hunwick have been receiving ridiculously sheltered minutes (high OZ start, low competition faced). Marc Staal and Kevin Klein have been killed with DZ starts, while receiving arguably equal competition faced with Dan Girardi and Ryan McDonagh. We can infer that Moore and Hunwick should have the lowest CA/60, while Staal/Klein have the highest CA/60. However, the numbers show us otherwise:

Hunwick and Moore do indeed have the lowest CA/60, likely due to the deployment strategy used. However the Girardi/McDonagh pairing has the highest CA/60, not the Klein/Staal pairing, which has roughly 10% more starts in the defensive zone. The quality of competition difference is negligible, so this illustrates the relatively poor play we’ve seen from both Girardi and McDonagh. Girardi has never been a Corsi darling, but both have had rough starts to the year. 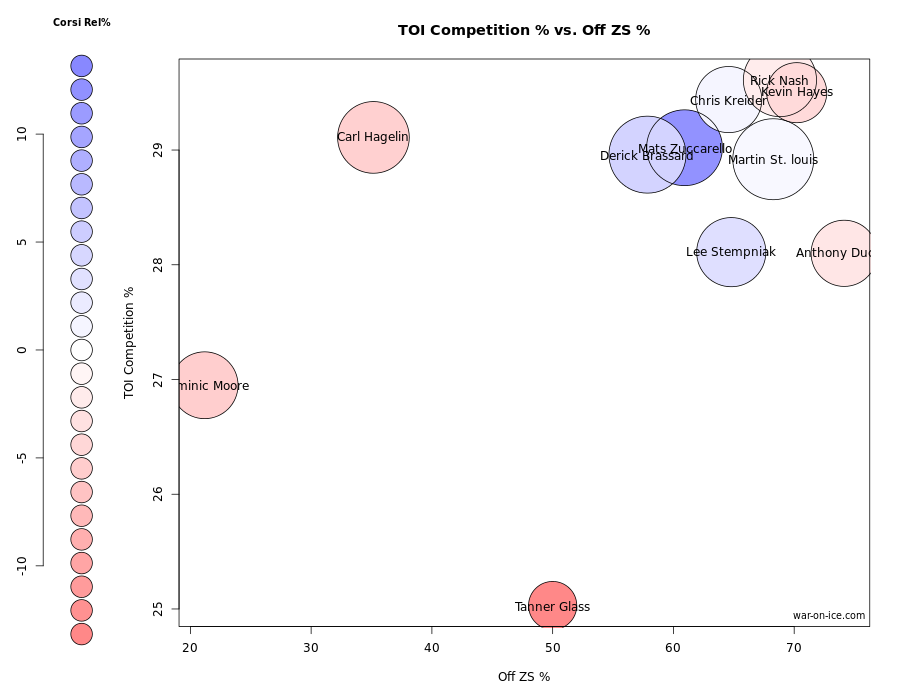 First off, that’s a lot of Ranger forwards above 50% OZ starts. From what we know about specific players (and the matchups received), we should expect those like Dominic Moore, Carl Hagelin, Tanner Glass, and Rick Nash to have better shot suppression numbers than Kevin Hayes and Chris Kreider. For the most part, that’s true.

First, it’s early, and the possession numbers are subject to small sample size variations. Second, a lot of it has to do with his linemates, a rookie center or a wing playing center for the first time in his career. Those aren’t exactly the best linemates for someone like Nash. Read up on the linked article, it’s fantastic.

You are going to see us analyze shot suppression a lot more as the season progresses, especially as we begin analyzing zone entries/exits. We ran into some technical issues out of the gate, but those posts are coming. Hopefully, we will be able to match what you see on the ice with what we see in the stats. If not, remember that the numbers don’t lie. Sometimes, re-evaluation is necessary.