With a John Moore suspension looming, what are the options? 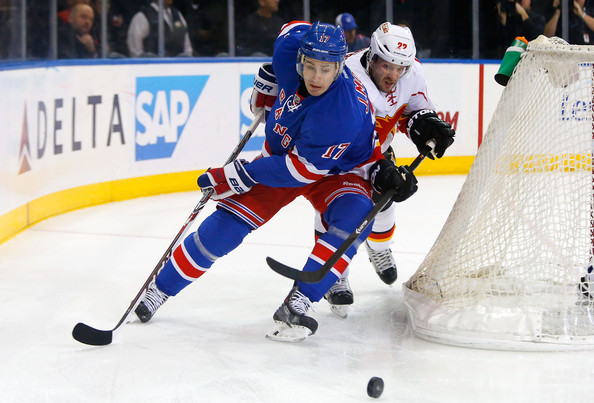 John Moore is almost guaranteed a suspension. An in-person hearing with the Department of Player Safety doesn’t guarantee a suspension, but it gives them the option of suspending a player more than five games. Since Moore is a repeat offender, receiving two games for a hit on Dale Weise in last year’s playoffs, it’s a guarantee he misses at least three games, likely five or more.

At the moment, Matt Hunwick is playing somewhat steady filling in for the injured Dan Boyle. Mike Kostka played one game, had a few epic turnovers, but one game isn’t indicative of an entire career. Conor Allen is in Hartford, and he’s the guy most fans think is ready for a shot. Dylan McIlrath was the last one cut from camp, and the first round pick has shown significant progress and promise.

So what can the Rangers do?

Option A: Stay the course with Kostka

Pros: Kostka may have had a few bad (ok, awful) turnovers in his only bad appearance with the Rangers, but we tend to focus on major gaffes. There’s no hiding it, they were bad. But over his career, Kostka isn’t a bad defenseman. He’s a positive puck possession player, which is more than we can say for a few Rangers regulars. Assuming those turnovers were just one terrible game, he’d hold his own.

Cons: Those turnovers were pretty epic.

Option B: Call up Conor Allen

Pros: He’s a solid puck moving defenseman who appeared to hold his own in his three game cuppa last season. Considering the fact that the Rangers have had issues moving the puck from the defense to transition to offense, Allen could be a nice addition.

Pros: He had a great camp. He won the 7D spot, since he was better than both Hunwick and Kostka, but he needed playing time so he was sent back to the AHL. He’s been a solid defenseman in Hartford as well, playing top pairing minutes.

Cons: His skating has never been his strong point, he is susceptible to being caught out of position to deliver a big hit, and he’s not the puck mover that Allen (or Kostka) is.

The decision really depends on the length of the suspension. I’d expect Kostka to get at least a game or two, and who knows, maybe the Hunwick/Kostka stop-gap fills in admirably. They aren’t a long-term solution, but they won’t disrupt the prospect development.

If Kostka and/or Allen can’t handle it, then it really depends on who plays worse. We know that Alain Vigneault prefers to avoid off-handed defensemen on the blue line (McIlrath-righty, Allen-lefty), but the matchups may dictate if the Rangers need a bruiser (McIlrath) or a puck mover (Allen). The Rangers certainly have some nice stop-gap options.