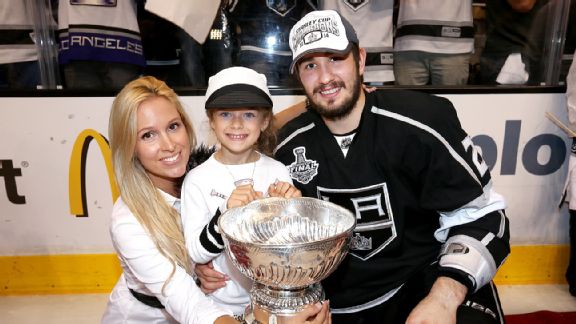 LA Kings’ defenseman Slava Voynov was arrested early Monday morning on charges of domestic violence, a story that unfortunately made more headlines than your average NHL story. Voynov has been suspended indefinitely pending the investigation, which came after his girlfriend was rushed to the hospital with injuries.

Of course, when something heinous happens, it’s very easy to assume things. We think we know everything because we have a nasty habit of wanting to know the news as soon as possible, regardless of its verity. The facts here as we know them are that a woman involved with Voynov was rushed to the hospital, and that the doctors deemed it necessary to alert police. We also know that, although we rip on Gary Bettman mercilessly, the NHL doesn’t want to channel their inner Roger Goodell, and would rather the player be suspended to handle the situation than be playing and glorified when they’re accused of a disgusting crime.

This is a big story because of many reasons. First of all, it’s a domestic violence case, which should never, ever be taken lightly. We’ve become so accustomed to this as sports fans that it’s disgusting. It parallels the shooting in Ottawa this past week being taken lightly by some people because “only one person was shot.” If you sit and look at that statement and you aren’t at least a little bit affected, you might want to seek help. Sadly, the Voynov story got so much press because it took place in Los Angeles, the hotbed of paparazzi. In fact, TMZ reported this before anybody else. Remember the Varlamov story from last year? That got press, but not nearly as much as Voynov.

Voynov’s extremely shy defense attorney gave a statement, and then an interview with Nick Cotsonika in which he made me sick to my stomach… err, defended his client. This isn’t surprising – he’s a defense attorney, he’s not going to say “well let’s see what the facts bring.” He’s well aware of the Ray Rice fiasco and doesn’t want the same to happen to his client. However, his use of the phrase “that woman” over and over again minimalizes the domestic violence issue as a whole; by depersonalizing the situation, it creates faceless people, and faceless victims. Whether or not Voynov is guilty, we don’t know. But what the attorney is successfully doing here is making her not a victim before we know whether or not she truly is.

The other issue taken with this is the “anti-American” babble. Let’s set one thing straight: Voynov is still getting paid. Sure, a player wants to play, but he is getting paid to handle his impending legal issues here. Voynov receives $3 million this year ($3,000,000) from the Kings, which averages out to about $36,585 per game. His bail was $50,000. So in less than two days of work, Voynov paid his bail. Am I supposed to think this is anti-American? If anything, it’s anti-American because this kind of grace is not received by your average Joe when they’re arrested. Do you think Bob in bookkeeping would be suspended with pay if he was arrested for beating his wife? Not likely.

As all of this boils down, there are a few things to keep in mind. 1- We don’t know the full story yet, and 2- domestic violence should never be taken lightly. I’m proud to be a hockey fan at a time when they immediately suspend a player for it, instead of other sports where they require and often ignore video proof of violence and wrongdoings.