What in the world are the Rangers to do with J.T. Miller? 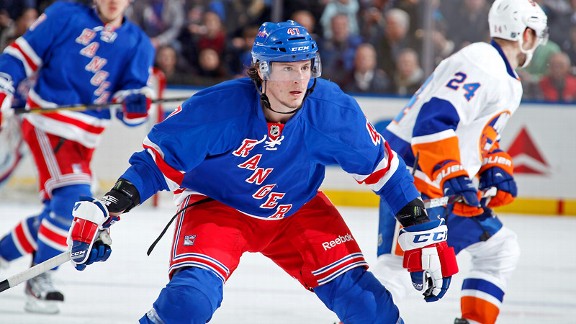 Just saying the name brings up a debate that becomes more heated than the never-ending Michael Del Zotto debates. A first round pick who is still just 21 years old, Miller has been touted as high as a potential 1C (not happening) to an epic bust (too soon, but also not likely). Much like the discussions about him, Miller has also played all over the place in the lineup.

But here’s what we do know about Miller: He had a great preseason, and seemed to finally take the next step after two years of bouncing back and forth from the AHL. He is close to a point-per-game in the AHL, so he has offensive talent. Prior to this season, he was also a defensive tire fire.

So what can the Rangers do with Miller?

Luckily, there are plenty of options, as he’s still 21 years old. Miller will be a healthy scratch tonight, although he may not be deserving of a scratch. He’s the team leader in relative Corsi (I know, small sample size, but still noteworthy). He’s also seen a string of bad luck while on the ice: Players are shooting just 7.69% while he’s on the ice, and goaltenders have an egregious .800 SV% while he’s on the ice. Simple regression to the mean shows that Miller’s stats will get better.

Beyond the stats, Miller may not be best suited at center. I’ve been on the Miller-to-wing idea for about a year now. Defense isn’t his strong point, and centers in Alain Vigneault’s hybrid strong-side overload/man coverage system in the defensive zone is incredibly taxing on centers. Perhaps Miller is best suited on the wing, where he can focus on transitioning to offense, something he’s been pretty good at throughout his career.

The problem there is that the Rangers appear to be set at LW. Chris Kreider, Anthony Duclair, and Carl Hagelin lock up the top-nine spots, and Miller isn’t a good fit as a 4LW when AV pins them in the defensive zone most of the time.

A trade is always possible, especially with the emergence of Duclair (headed for a big-time regression, be forewarned) and with Pavel Buchnevich coming to North America next year. Even at center, Kevin Hayes appears to have the inside track at 3C, he’s certainly better defensively.

If Miller can transition to the off-wing, he may be a good long-term replacement for Lee Stempniak.

Miller is one of the most interesting cases I’ve seen in New York in a long time. We know that he needs to be in the top-nine to be a meaningful contributor. But we know that the wing is probably the better spot for him in the long-term. There are certainly plenty of options, but Miller needs to step up and outperform the guys who have now bumped him to the press box.