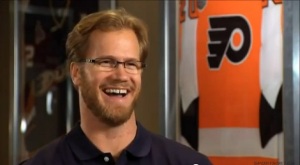 With the season beginning, the topics of conversation are all over the place. Some interesting ones from around the league include the Avalanche start (abysmal at best, someone really needs to start a Patrick Roy bail fund for when he loses it) and the shaky starts of some elite goaltenders (Jonathan Quick and Tuukka Rask), among many great single games to discuss.

Since we’re always trying to find fun new ways to open Rangers fans eyes to league happenings, today we’re going to play Devil’s Advocate. Here, two of us (Dave and myself) will argue both sides of an issue. Perspective – it’s a hell of a thing.

Today, we discuss the NHL hiring Chris Pronger to head the Department of Player Safety.

Why hiring Pronger is a GOOD thing

Nick Cotsonika noted that Gary Bettman’s reasoning is that the cap recapture penalty was designed to prevent teams from adding dead years to the back of a deal. Pronger was signed before the new CBA, but didn’t retire early. He was forced to retire because of injury. There is no rehab obligation and there is no obligation to the Flyers. This is why the NHL is ok with it.

This isn’t like Pronger signed a cap circumvention deal and is “injured” and using LTIR to get rid of the cap hit while getting paid. He would probably still be playing if not for the injury.

He knows head injuries very well, and while some may question his objectivity regarding certain teams, you have to give professionals the benefit of the doubt. He may be a great person for the job, so we will have to wait and see.

Why hiring Pronger is a BAD thing

When you take a minute out of your day to consider some current-day dirty players, a few key names come to mind. Matt Cooke. Raffi Torres. Anybody included in this cluster-eff of a post here. Most of these guys pale in comparison to Chris Pronger who, before his career-ending injury (despite him still being under contract with the Flyers…), racked up 8 suspensions for a total of 22 games. Remember when he intentionally stomped on Ryan Kesler’s leg? That must have felt nice.

Take away the fact that he’s on Philly’s LTIR for a minute – which is utterly absurd, I know – but let’s try. Brendan Shanahan, despite all the crap he took from fans, did a good job of explaining his Shanabans in a valiant attempt to end headhunting. Concussions end many careers — one even ended Pronger’s. They shouldn’t be taken lightly. So why put someone in a position to decide punishments for cheap shots when their thought process is that it’s okay to try to break another player’s leg with an ice skate and 200 pounds of force?

I can’t speak to contracts. I make no excuses for not quite understanding the evolution of the CBA. All I do know is that technically, Pronger is a talented yet dirty defenseman who’s been suffering from a head injury for a few years. Now he gets to decide how his fellow players will suffer consequences from delivering hits that have made him famous throughout his career.