Tracking the Rangers zone entries & exits for the upcoming season 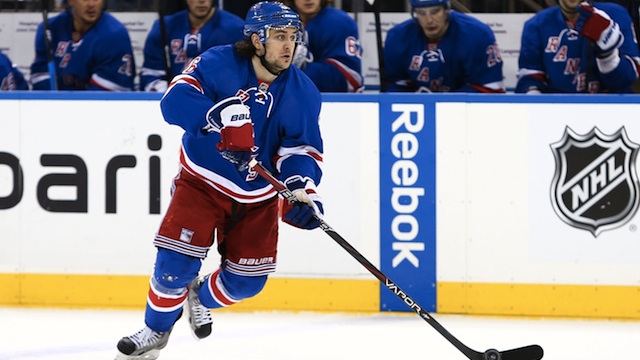 Over the course of the summer there has been one major topic that continues to pop up in the hockey analytics world: tracking zone entries and exits. The concept was originally brought to the forefront of the analytics community by blogger turned NHL consultant, Eric Tulsky. From there the idea of tracking these events took off, most noticeably with Corey Sznajder (creator of the Hurricanes’ blog “Shutdown Line”) who undertook a huge workload this summer by tracking every entry and exit from every NHL game of the 2013-14 season.

That’s just a little bit of the background, but why is tracking entries and exits so important?

The days of chip and chase hockey are slowly dying. Just like everything else in this world, hockey is evolving. Many teams have hired people to head up analytics departments this summer, including the Rangers (Jim Sullivan). Puck possession is as valuable as anything else in the game. The belief is that carrying the puck into the offensive zone is a more efficient play than dumping and chasing, and ultimately results in more shot attempts. At the same time, carrying the puck out of your own end results in more success through the neutral zone than stretch passes through multiple opponents. By tracking these events game by game we will be able to get a sense of which players can sustain high possession numbers and contribute to a teams shot total, which in turn will contribute to goals scored.

Of course we will see some players connecting on stretch passes which eventually lead to odd man rushes, but in the long run the percentage of stretch passes out of your own zone is mostly unsustainable and the thought is that it leads to far too many neutral zone turnovers. The same can be said for chip and chase hockey. Sure, it will lead to some goals and you wont always have the option of carrying the puck over the blueline, but more often than not you are willingly giving the puck up to your opponent, something you clearly do not want to do.

Another part of the game we will gain information on by tracking entries and exits will be seeing which players, mostly defensemen, defend entries well. Many of the “crease clearing” defensemen that so many teams and fans value are nothing more than sticks in the mud, unable to stop the opposition from gaining the zone with ease. This collection of data will be able to separate a lot of things defensemen should be doing that maybe they aren’t despite our original perception of their defensive strengths.

This upcoming 2014-15 season, Dave and I will undertake the task of tracking zone entries and exits for every Rangers game. While the concept may seem a bit confusing now, it will make more sense as we begin to post the data we collect and analyze it for you.

Ultimately this all comes down to evaluating players. We want to know who is helping the Rangers win hockey games and who is hurting their ability to win. I understand many people are resistant to new concepts and analytics in general, but there is more to these metrics than the dreaded “Corsi” and “Fenwick”. Try to keep an open mind and hopefully I can start convincing the naysayers that these metrics hold a lot of meaning and value.

If you have any questions or inquiries about this project or anything analytics related, whether it’s an explanation of certain statistics or anything at all don’t hesitate to email me (mburnshockey@gmail.com) or reach me on twitter (@mburnshockey).