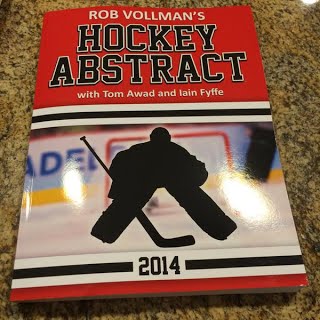 If you’ve been paying attention this offseason, you’ve noticed that several NHL teams have hired advanced stats experts. Though #fancystats still have opposition, you don’t need to look further than the Stanley Cup champion Los Angeles Kings for proof that they offer valuable insight.  No longer are these metrics exclusive to a small community of mathematicians, they are now mainstream in hockey.

Last summer I reviewed Rob Vollman’s Hockey Abstract and began to fall deeper into the rabbit hole of advanced stats. Rob was kind enough to give me a copy of Hockey Abstract 2014 – co-written by Tom Awad and Ian Fyffe – again this year, and it was even better than the first edition.

Vollman’s greatest strength is in putting what appear to be complicated formulas, graphs and figures into words that anyone can understand, whether they’re good at math or not. In fact, I’ll readily admit that I glossed over many of the charts in the book, because the real value is in Vollman’s translation. I’m much more concerned with what the numbers mean than how they’re reached, so I enjoyed Vollman’s thought process and conclusions most of all.

Many fans that have been slow to embrace these new statistics are probably turned off by blog posts that feature dozens of graphs and impossible to understand math language, but Vollman manages to keep things fun while covering a pretty complicated subject. In addition to informative team by team breakdowns, Vollman tackles questions like “What value do enforcers have in today’s NHL?” and “Who is the best power play (and penalty kill) specialist?” Meanwhile, Fyffe offers an extremely interesting study on the Hall of Fame committee’s statistical standards, which includes plenty on what it will take for Henrik Lundqvist to be inducted.

Last year Vollman’s statistical model indicated that the Ottawa Senators would win the Stanley Cup, so it’s certainly not perfect. But that’s actually another area where Vollman shines. He spends a whole chapter examining what went wrong with that prediction and devotes plenty of time to test his mathematical conclusions against common real-life perceptions. In short, though Vollman is obviously a huge proponent of #fancystats, he isn’t one to completely ignore the eye test, either. That makes his book a great read for the fans that have been slow to adopt these new metrics, because their theories aren’t just dismissed out of hand, they’re central to the narrative of the book.

You can purchase a copy of Hockey Abstract 2014 here.