When the Rangers signed Lee Stempniak to a one-year deal worth $900,000, many applauded Glen Sather. He found another low-risk, high-reward player that could potentially replace Benoit Pouliot on the third line. In all honesty, they are pretty identical players from a #fancystats point of view. But of course, numbers don’t tell the whole story.

One of the best parts about Stempniak’s signing is that he’s a right-handed shot. Based on that alone he helps the left-handed heavy Rangers be a bit more balanced on the wings, and potentially on the powerplay. He’s a strong possession forward who plays a solid, if unspectacular, two-way game. He also saw some significant time on the penalty kill with the Flames/Penguins last season. so he presents even more flexibility on special teams.

But one of the bigger questions is about how he will affect his teammates on the ice. 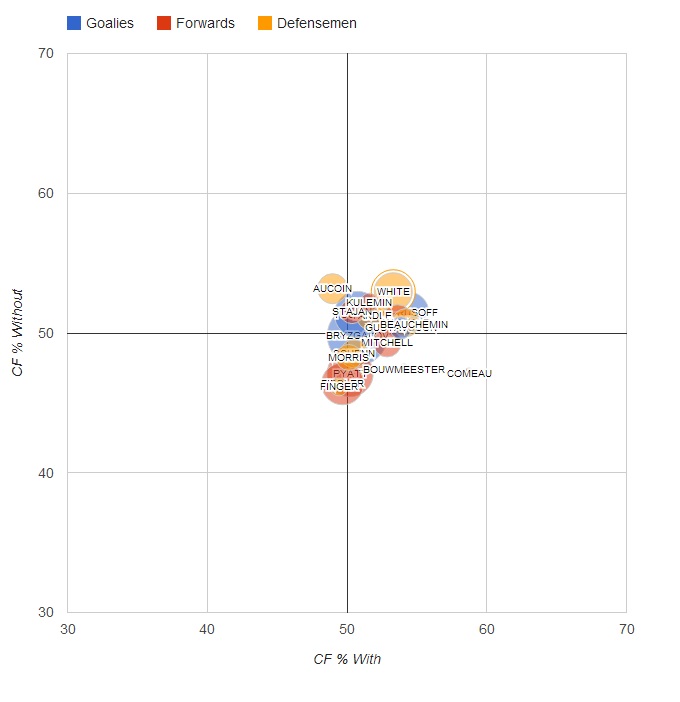 From the chart, we see that Stempniak is a puck possession driver when on the ice since the majority of the bubbles are on the right side of the y-axis. Since there is an even split above and below the x-axis, we can deduce that while he drives possession on the ice, his teammates don’t falter when he is off the ice. He isn’t someone who is going to be a game-breaker while on the ice, but he will be a nice complementary player in all three zones.

When all is said and done, Stempniak will hopefully prove to be another one of those great bargain signings. If he can turn into what Pouliot was, it’ll be a great signing. If he can reproduce what he did last season (Pouliot’s scoring pace without the defensive zone lapses), then it’ll be a fantastic signing. I’d chalk this up as a solid signing.