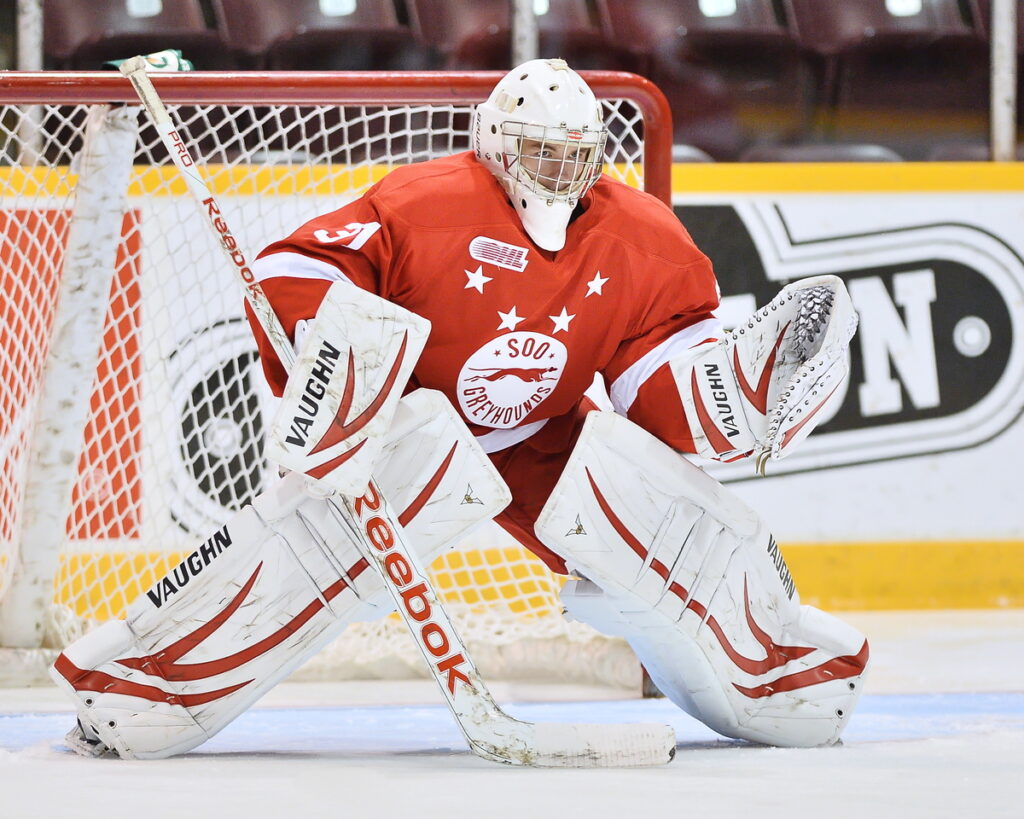 The Rangers went into the 2014 draft with four picks, and wound up making seven selections. They acquired the extra picks by dealing Derek Dorsett to Vancouver and trading down twice in the fourth and fifth rounds. Considering it wasn’t a particularly deep draft, in that there were few impact players, the Rangers made some good selections to not only restock the prospect cupboard, but address organizational needs within the system. It’s worth noting that most of these picks are project picks, and will take around three or four years to develop.

Halverson is one of the two picks that intrigue me the most. Goalie was a big position of weakness in the system, and Halverson was the first of two goalies taken by the Rangers. He didn’t get much playing time in OHL last season because he was backup, but he will be main guy this year. At 6’4, Halverson is certainly a big kid. Corey Pronman says he is big, athletic, and an elite puck handler. Vic Carneiro (Director of Player Personnel for the Greyhounds) mentioned he’s like having an extra defenseman, and a very good goalie. Halverson does need to fill out a bit, and will attend the US WJC camp this year. Overconfidence in his puck handling has been an issue, but it should right itself as he plays more.

Iverson is a right-handed center, and is a big kid at 6’1″, 210 lbs. Future Consideration’s NHL Draft Guide had this to say about him:

A big strong power winger who is not scared to throw his weight around and do the heavy lifting on a scoring line. He is at his best fighting for loose pucks and battling for space in front of the opposing net. Does not possess the highest skill level.

Iverson also has some good hands and a great shot/release. He’s not going to be a top scorer in the NHL, but he will be a nice depth guy that goes to the net and can chip in points, if he fully develops.

Mantha has two pretty good things going for him: He’s a right-handed shot, and he’s huge (6’5″, 225 lbs). That said, Chris Peters didn’t have great things to say about him, noting he’s a long term prospect with minimal offensive talent. He is very physical and knows how to use his size though. He has a decent hockey IQ, which helps his positioning. Future Considerations had this to say about him (some conflicts with Peters’ review, but that’s why the draft is a crapshoot):

Mantha has good bloodlines and impressive size. Handles the puck well and makes a strong breakout pass. Uses his reach and strength to defend. He needs to work on his transition and overall mobility as well as improve his physical play as he comes off as somewhat soft

Shestyorkin (Shesterkin is the Americanized version of his name) is interesting, in the sense that he’s a bit of an unknown. The 6’3″, 185-lb goalie played nine games in the KHL, putting up a 2.80 GAA and a .903 SV%. I’ll defer to Adam Herman on this one, who dug up some good stuff on him. Basically, he’s a quick goalie who covers the net, but flails a bit which can lead him to be out of position. Think Tim Thomas, without the puck handling.

We actually scouted Nejezchleb here. But to recap: Injuries led to Nejezchleb’s slide to the fifth round, and he appears to be a bit of a late bloomer. The Czech winger led the Wheat Kings in scoring this year, with a line of 32-35-57.  Nejezchleb is also 20 years old, so there’s a chance he makes the jump right to the AHL. That’s doubtful though, but it’s worth pointing out Nejezchleb’s age, which would give him an advantage in the Canadian Juniors.

Walcott played his rookie year in the Q, putting up a line of 10-29-39 in 67 games, which is fairly impressive for a rookie. At 5’11”, 168 lbs, Walcott actually went undrafted in the QMJHL draft, electing to play club hockey at Lindenwood University before BB signed him. Like Nejezchleb, he’s a bit older (20 years old), so his numbers have to be taken with a grain of salt. I can’t find much on Walcott, so I again defer to Adam Herman.

Nanne is another Edina High product, a school that just breeds hockey players. Future Considerations had this to say about the 5’9″, 155-lb defenseman:

Nanne is a flashy offensive minded defender that boasts confidence and creativity with the puck. He skates well with good lateral agility, solid puck control and makes strong passes. Always a threat to go coast-to-coast. Can suffer bouts of ‘turnoveritis’ and despite playing with sandpaper has some size concerns.

Chris Dilks put together a great scouting report as well. Nanne is a big project pick. He’s committed to Ohio State for 2015, but will play a year in the USHL before he gets there. With that year in the USHL, and assuming three years in the NCAA, we are at least four years away from seeing Nanne in Hartford, let alone the NHL.

The Islanders traded with Tampa Bay to grab the 28th overall pick, which originally belonged to the Rangers. They selected Josh Ho-Sang, a very talented scorer in the OHL. He had “attitude issues” and is viewed as selfish. But I find that hard to believe, since he had over 50 assists. He’s a solid talent, but still raw.