Benoit Pouliot scored on a breakaway, and Carl Hagelin scored on a mini-breakaway/lucky bounce. Both used their speed to burn past a Kings defense that was not expecting the Rangers to be as quick as they were. But it was a turnover by Derek Stepan that got the Kings on the board, and then it was the Girardi turnover that sealed it for the Kings.

Speed kills. Pouliot pressured Drew Doughty at the point, pokechecking the puck away from the defenseman as he attempted a toe drag. After that he was off to the races, ripping a wrister over Quick’s blocker for the early lead. No picture on this one, but that’s because I couldn’t get a clear one, but I found a video instead.

While on the penalty kill, Brian Boyle gained control of the puck along the far boards and chipped it out of the zone. Hagelin burned Slava Voynov to get the semi-breakaway. His shot was stopped by Quick, but the rebound went off Voynov’s skate and into the net. Speed kills. I couldn’t get a picture of this one either, they all came out blurry. 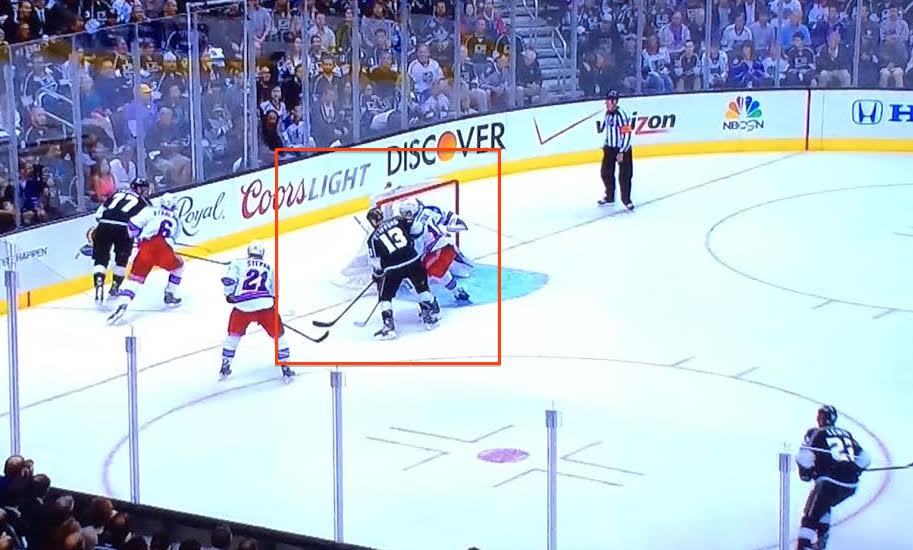 Derek Stepan turned the puck over in the defensive zone to Kyle Clifford, who moved the puck to Jeff Carter behind the net. Clifford gained the inside position on Marc Staal a a bad angle, and Carter slipped him the puck. Clifford roofed it over Hank from the bad angle. The Stepan turnover started this.

Derek Dorsett was a bit out of position on this one, keeping his attention on the puck carrier instead of noting that Doughty was coming in as the trailer. Justin Williams hit Doughty with the pass, who put the puck between his legs to get around Dorsett on his way to beating Hank between his blocker and body to tie the game. 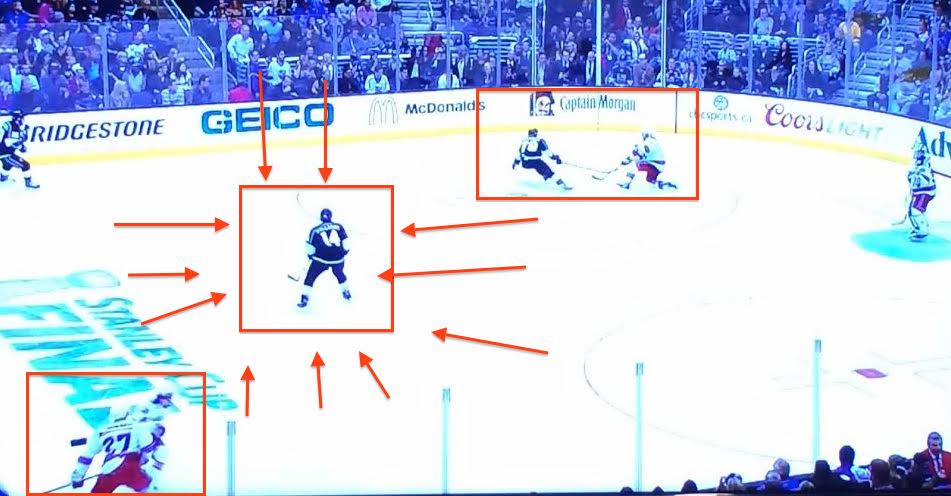 Girardi whiffed on a clearing attempt (puck looked to bounce a bit), falling to his knees in the process. Then, from his knees, Girardi panicked a bit with Tanner Pearson on him, and threw the puck right to Mike Richards. Richards found Williams wide open in the high slot, who roofed it over Hank. This isn’t all on Girardi, he had absolutely no support. Ryan McDonagh and Mats Zuccarello were in China instead of helping out defensively, and there was no backcheck.

The Rangers lost a winnable game, but last I checked the series isn’t over. The Kings can’t win a Cup in one game. Alain Vigneault is a good coach, although he was outcoached in this game. He will make adjustments, and the team will come out firing on Saturday night. However, they now must win on Saturday, as a 2-0 hole is going to be near impossible to come back from against these Kings.