That ugly feeling hit 9:04 into the first period. The Rangers had just failed to score on their third straight powerplay opportunity. Nine minutes, six of them on the powerplay, no goals, and just five shot attempts during that span. Stomachs started turning, and at that moment many knew how this game would go. The fact of the matter is that those six minutes cost the Rangers the game, a game in which Henrik Lundqvist almost committed highway robbery. Those six minutes gave the Penguins life, when the Rangers could have put the game away.

Instead Hank stood on his head –making 33 of the most unbelievable saves I’ve ever seen– in a losing effort. Marc-Andre Fleury, who played well, stopped all 22 shots the Rangers threw at him. The Pens had a whopping 65% Corsi advantage. Pittsburgh played perfect hockey after those three penalties (even had perfect penalty kills), and you have to tip your hat to them. They won the game, and the Rangers are clearly gassed with another game coming up tonight. 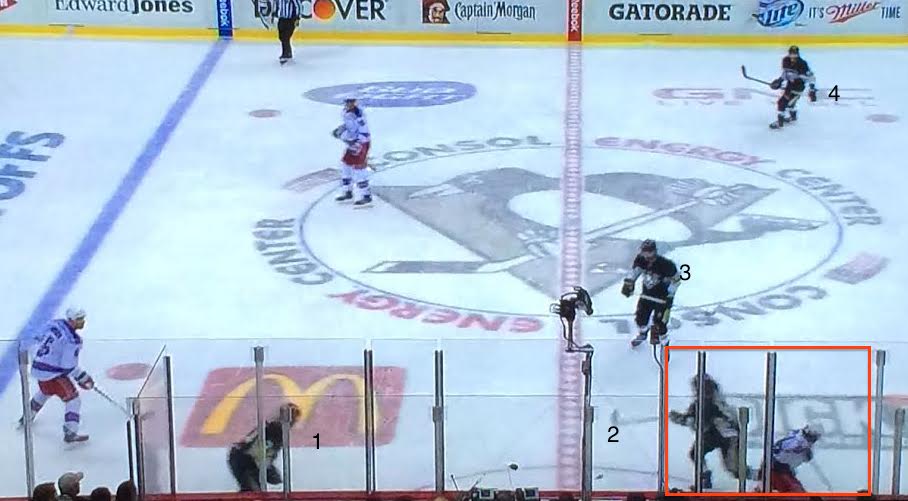 Mats Zuccarello initially turned this puck over to Kris Letang in the offensive zone. Zucc then tried to steal the puck in the neutral zone, but his failed attempt sprung the Pens on a 4-on-2 break. Chris Kunitz picked up the puck from Evgeni Malkin, and then passed it across to Letang before cutting to the net. Letang’s pass to Kunitz went off a diving Dan Girardi’s stick and in the net. 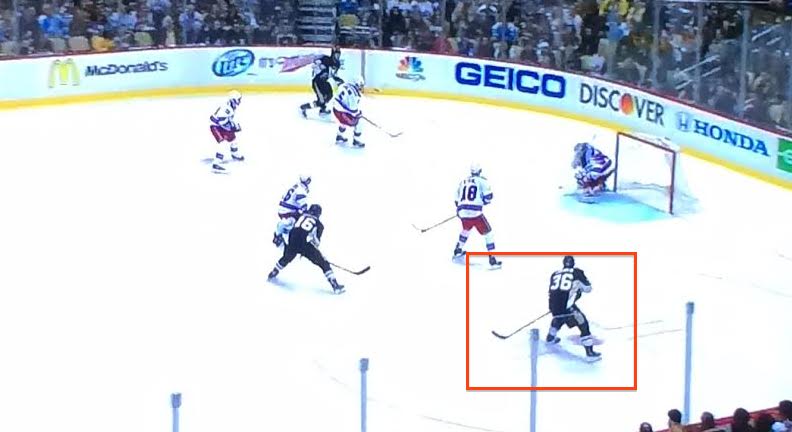 After Derek Dorsett took a pretty boneheaded penalty, the Pens capitalized on the powerplay. James Neal threw the puck at the net from a bad angle as Jussi Jokinen came down the weak side. Marc Staal didn’t notice him, and Jokinen was wide open for the rebound.

The Rangers need more speed in the lineup to match up with Pittsburgh, so we might see J.T. Miller in the lineup tomorrow for either Dan Carcillo or Derek Dorsett. Most want Dorsett out of the lineup, especially after that bad penalty late in the game. I don’t like the idea of breaking up that fourth line, and Carcillo isn’t exactly a defensive stalwart. But I wouldn’t be opposed to either coming out of the lineup for more speed.