The Rangers followed up their dud in Game Two with a convincing 4-1 win in Philly last night to take a 2-1 series lead. The win was a complete team effort with great goaltending, solid defense, and balanced offense. But don’t be fooled by the score, Philly controlled most of this game, generating a 65.2% Corsi advantage for the game (score effects). Good teams find ways to win games in which they are dominated, and the Rangers did just that by taking advantage of some terrible goaltending. 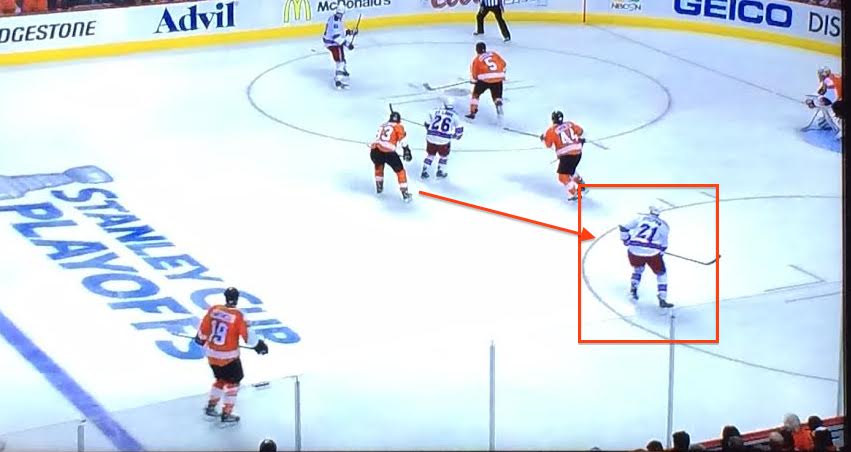 This goal was a bit of a weird play. Both Kimmo Timonen and Brayden Coburn backed off the puck while it was in the air, allowing MSL to pick up the puck by the blue line in the offensive zone and dish to Nash at the far boards. Jakub Voracek deserted Derek Stepan on the weak side, and that combined with the Ray Emery whiff on Nash’s shot led to Stepan getting the rebound goal. It’s like the Flyers fell asleep on this one. 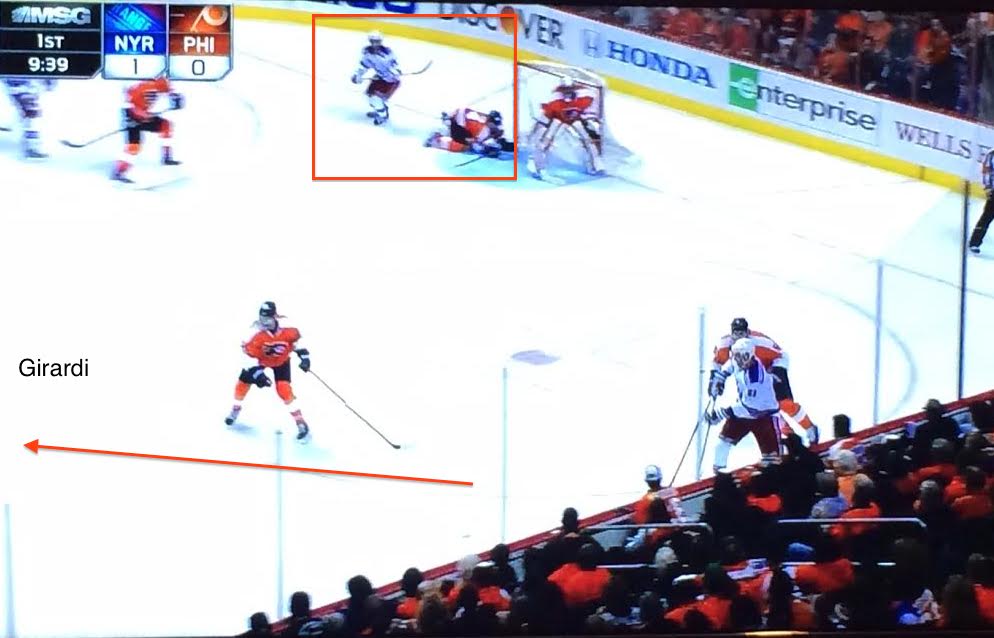 Timonen simply got tangled with MSL behind the net and fell, giving MSL room to get to the front of the net to deflect the Dan Girardi shot (which was flubbed) past Emery. Bad luck play for Timonen there. 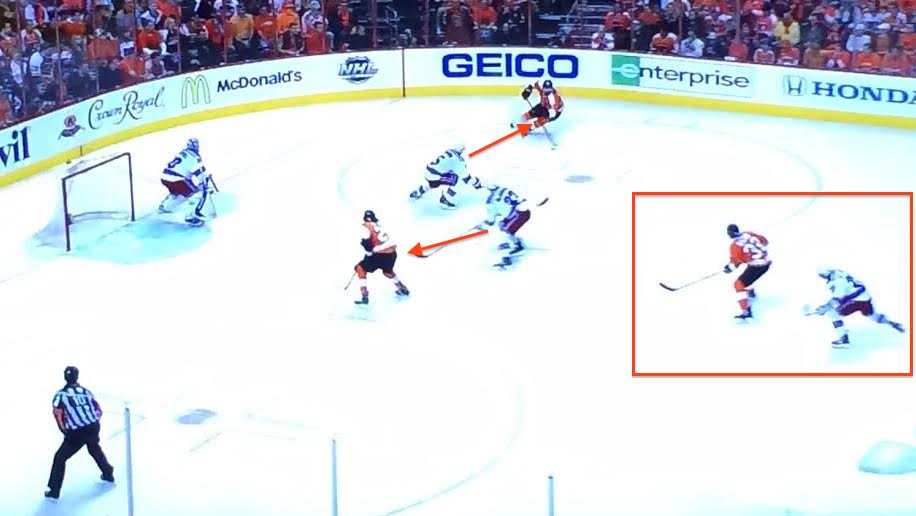 MSL attempted to hit Brad Richards with a pass out of the defensive zone, but it got tangled with a fallen Ryan McDonagh. Claude Giroux picked up the puck and transitioned, hitting Voracek on his wing. MSL couldn’t catch up with Mark Streit, who took the Voracek feed and one-timed it past Hank. Girardi and McDonagh made the right defensive reads on the play.

Marc Staal made a very smart pinch to keep the zone, which led to some good Rangers board work to keep possession of the puck. Girardi came off the bench, and the Flyers were unable to pick him up. Richards simply fed him the puck for a rip from the point that beat Emery with Dan Carcillo in front.

What a period by Carcillo. First, the classy Flyers fans boo his injury after Matt Read delivered a drive-by that was a suspend-able offense (but he won’t be). Then, after making a solid defensive play on Read, he was called for a penalty. After the Rangers killed it, with Hank making a huge save at the end, Brian Boyle was able to steal the puck from Brayden Schenn and transition with Carcillo streaking down the middle. Carcillo simply burned Simmonds and Boyle made one of the best saucer passes I’ve ever seen him make. Carcillo simply tipped it past Emery.

Score effects had a big impact in the third, as the Rangers sat on their lead, but the Flyers still had a sizable advantage heading into the period. The chart suggests the Rangers sat back once they got their second two-goal lead.

The win gives the Rangers a 2-1 series lead, with Game Four in Philly on Friday night. Steve Mason made an appearance at the end of the game, so it’s easy to say that he will play in Game Four, as the Flyers will desperately need a win. They don’t want to head into Game Five down 3-1 in the series.