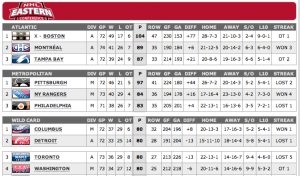 On Monday, Dave pointed out that though things have seemed a little hairy lately, the team’s playoff chances were still at 94.4% according to SportsClubStats.  Those odds improved to 97.9% after New York beat Phoenix in overtime and Philadelphia lost in regulation to Los Angeles on Monday night, and St. Louis beat Toronto, the Capitals lost to the Kings in a shootout and the Blue Jackets beat the Red Wings on Tuesday.

In other words, barring a monumental collapse, the Rangers will be in the postseason.  Of course, we’re still inclined to worry about the supposed 2.1% chance that does happen, so I figured we ought to check in on the teams that could ruin New York’s spring.

If you thought the Rangers had a bad start to the year, then what would you say about the Flyers, who fired their coach after just three games?  But the Flyers have really been among the league’s better teams for several months.  Claude Giroux leads the way for Philly, averaging over a point per game, but the Flyers also have six other players with 15+ goals on the year.  As always, Philly has a high-powered offense, but – and this won’t surprise you – the Flyers’ Achilles heel is their goaltending and team defense.  Steve Mason and Ray Emery have combined to give up an average over 2.8 goals per game.  Philadelphia will visit the Blueshirts tonight in a game with huge implications, and the Flyers still have tough games left against Boston (twice), St. Louis and Pittsburgh.

The Capitals fell back in the race with five losses in six games to start the month, but Washington has climbed back into it with big road wins over the Ducks and Sharks last week.  Washington has won four of its last six and looks like a real threat…for now.  Like the Flyers, the story is kind of the same for Washington.  The team has plenty of talent but is remarkably inconsistent.  The Caps are 23-9-5 when Alex Ovechkin scores this season, but he has just four goals in his last 10 games.  Part of Washington’s late surge can be attributed to the acquisition of Jaroslav Halak, who was 4-2-2 with a 2.34 GAA and a .929 SV% since coming over at the deadline.  Russian sensation Evgeny Kuznetsov has also provided a boost with a goal and five assists in his first eight games.  The Caps still have games left against Boston, St. Louis and Chicago.

The Blue Jackets are a very young team and it’s showing at the most crucial part of the season. Columbus has just three wins in its last seven games and is 11-9-2 since January 25th, before which the Blue Jackets had won eight in a row.  Ryan Johansen has a team-leading 54 points, but four other Jackets have 18+ goals.  Whether the Blue Jackets make the playoffs or not may well be up to Sergei Bobrovsky, who has gotten better as the season has gone on. He has a sparkling 2.15 GAA and a .928 SV% in March.  The Jackets still have tilts with Pittsburgh, Colorado and Chicago.

The Red Wings have been really, really banged up all year, but Mike Babcock’s guiding hand has them on the brink of a playoff berth nevertheless.  Lately they’ve been boosted by rookie winger Gustav Nyquist, who has an absurd 20 goals in his last 24 games.  Detroit has been fighting to stay in the hunt all year, and that hasn’t changed recently.  The Red Wings have now won three of five after dropping three of four.  They’re still in the driver’s seat despite playing without Pavel Datsyuk, Henrik Zetterberg Jonathan Ericsson, Justin Abdelkader, Stephen Weiss, Tomas Jurco, Jonas Gustavsson and Dan Cleary. Detroit still has games against Boston, Pittsburgh and St. Louis.

The Leafs are fading fast. They’ve dropped six in a row and have won just four times in their last 14 games. It shouldn’t come as a huge surprise, given that the Leafs rank 25th in shots per game and dead last in shots allowed. Making matters worse is that Toronto’s goalie situation has become a distraction. Jonathan Bernier has established himself as the clear No. 1, but James Reimer has effectively gotten thrown under the bus and teammates are being forced to answer questions about him instead of focusing on the playoffs. There’s no doubt that Phil Kessel is this team’s MVP, but the Leafs have six reliable offensive players with 17+ goals. If the Leafs do make it to the playoffs, it’ll be because they built up such a padding early in the season. But right now, they’re out of the playoffs on the tiebreaker and playing the worst hockey of any of these teams. Toronto also has just eight games left, one of them against Boston.