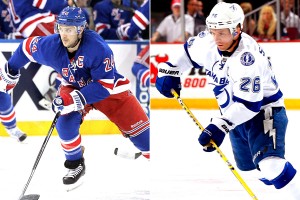 As I’ve been known to do sometimes, I’m going to ignore the work of my esteemed co-writers (in this case, Kevin) and offer my thoughts on a landmark day in Rangerland.  So, if you’re not looking for more analysis of the Trade Deadline, tough.  Read it any way.  Here’s my thoughts on Wednesday’s trade deadline activity, mostly Cally, but other thoughts as well.