Forwards State of the Rangers

The lines Alain Vigneault found success with are about to be changed, probably for good 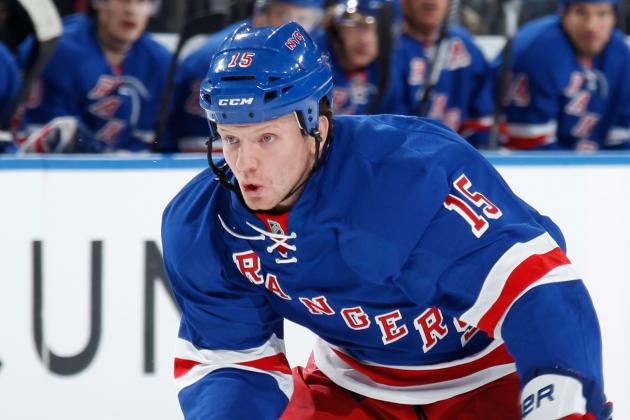 The return of Derek Dorsett plus the call up of J.T. Miller minus Mats Zuccarello and maybe Ryan Callahan equals…?

I still can’t get used to Alain Vigneault’s steady line combinations after four years of John Tortorella’s incessant juggling, but Vigneault has stuck with the same combinations for quite some time now.  It’s worth nothing that the Rangers finally turned a corner this season thanks in no small part to the team’s balance and chemistry up front.  Mats Zuccarello has been the team’s best forward so far this season and a key cog in Vigneault’s formula, but with him lost for likely another week or two (not to mention the upcoming trade deadline), Vigneault will be forced to rejigger his preferred trios.

Throw in the fact that winger Derek Dorsett is ready to return from a broken fibula and 20-year-old J.T. Miller, who has been dominant in the AHL, was recalled last night, and it’s tough to predict what Vigneault will end up with.  It’s probably most likely that Vigneault will be forced to try several different new looks – which might not be settled by the trade deadline in three games, throwing us back to square one.

Luckily Zuccarello really won’t be out long-term, but given the general roster uncertainty, we’ve likely seen the last of:

In the short term, it’s ridiculous for Miller to be up again if he’s going to be a healthy scratch.  Miller has been jerked back and forth repeatedly this season and should be spending the remainder of the year in the minors.  If he’s just up as insurance, it’s hard to see why the team wouldn’t reward a Wolf Pack player that’s also been dominant lately – Oscar Lindberg.

Dorsett had been a key member of the Blueshirts and was playing some of his best hockey before getting injured, so if he’s healthy you’d have to think he’s going back into the lineup.

So there you have it, the odd state of New York’s forward depth exiting the Olympic break.  What lines would you like to see against Chicago?


Categorized: Forwards State of the Rangers