This year’s Olympic competition sports a pool of goaltenders amongst the strongest we have seen since the NHL began participating in the games.  The United States and Finland are especially deep, each with three goaltenders that could easily start for most nations.  Although the tournament has already gotten underway, and we have seen some solid (Lundqvist, Hiller) performances and some sketchy (Rask, Halak) ones, let’s take a look at what each county’s best stopper has to offer.  I realize there are going to be some changes made between the pipes as the tournament goes along and most teams have several starting caliber tendys, but I’m going to break down the ones who should be starting based on ability level and previous performance. 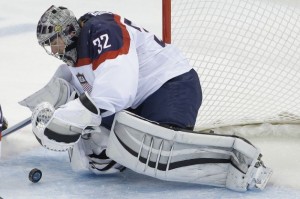 Why not start with the Red, White and Blue?  Despite this being a Rangers’ blog, I have committed a significant amount of digital ink to the King’s world class netminder.  Ryan Miller was dynamite in 2010 and deserves some ice in Sochi, but this is Quick’s team.  The Americans will only go as far as he can carry them, and judging from some of his playoff performances, that could include the podium to accept the gold medal.  His athleticism in this tournament is rivaled only by (ironically enough) the two Russian netminders.  However, his technical skills, vision and positioning are lightyears ahead of the hosts. 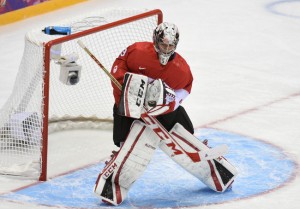 Roberto Luongo might end up with something to say about the Canadian crease when all is said and done, but Price has been anointed the starter, and rightfully so.  His nonchalant character in the net has come under some criticism in the halcyon days of his career, but it’s only because his movements are so fluid and compact that he appears aloof.  His efficiency is second to none (both in the NHL and the Olympics) and makes incredibly complex, difficult saves look easy.  He is used to the pressure cooker that is the Montreal media market, and should be well equipped to defend gold for the great white north. 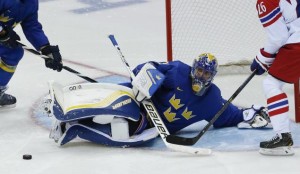 As you can see, pics are still scarce

What else is there to say about Henrik Lundqvist at this point?  Any regular reader of this site knows my affection for The King’s skillset.  He is on an upswing of form heading into the Olympic break and should be an anchor for a formidable Swedish squad.  After winning the gold in Turin in 2006, there is no doubt Lundqvist will be motivated to add another Olympic triumph to his resume.  He is off to a solid start after slowing down a feisty Czech team 4-2 in the opening tilt of the tournament. 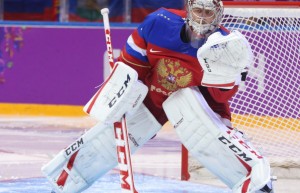 There is still some debate between who will end up being the #1 goaltender for the host nation, but I would think the man affectionately known as “Bob” will get every opportunity.  I only interject controversy into the situation because after a Vezina winning campaign in last year’s shortened season, this year has been uneven at best for Bobrovsky in Columbus.  Semyon Varlamov has been in much better form out in Denver, so it could go either way.  Both tenders offer elite levels of athleticism with questionable levels of aggression.  They are very similar goaltenders in many ways, including a penchant for getting caught chasing the puck carrier and ceding open nets for puck moving sides.  Make no mistake, though.  Both are wildly talented netminders, and if one catches fire, Russia may just be standing on the top podium when all is said and done. 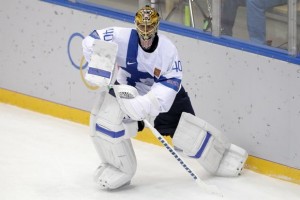 Rask got off to a rough start in his first game of the tournament, allowing 4 goals on 20 shots in an 8-4 win over Austria.  He is capably backed up by Vezina nominee Antti Neimi and Kari Lehtonen, both of whom could step in if Rask falters, but I think he will get a relatively long leash.  He leads the NHL in shutouts, and thanks to Pekka Rinne’s unfortunate hip injury, has long been considered the clear starter for a sneaky-good Finnish side.  I have full confidence he will shake off the nerves and provide a solid presence in the Finnish net, but he will definitely have to look over his shoulder if his play doesn’t improve. 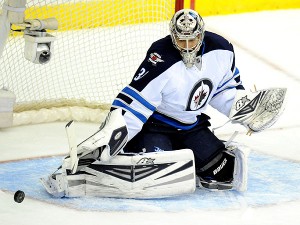 Yet to be seen in a Czech uniform

Pavelec is the most maddening type of goaltender: All-star talent and men’s league work ethic.  He has been cited on many occasions as unmotivated and complacent.  Combine that with the fact that he is the only NHL goaltender on a declining Czech team, I wouldn’t be surprised to see him contribute to an early exit from medal consideration.  Then again, if he gets hot, he could surprise the hockey world.  Until the next time he gets cold.  Have fun, Winnipeg. 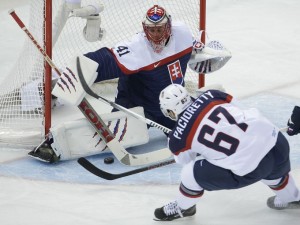 Halak found himself on the business-end of Team USA’s aggressive attack Thursday morning and was left to lick his wounds after allowing 5 goals on 25 shots.  He remains a very solid netminder, even if his impressive injury history has taken the elite edge off his game.  He has average mobility, but gets by on solid positioning.  He also has a habit of going on tilt when he concedes a few quick ones. Unfortunately, I don’t see much consequence to Halak’s overall play in this tournament, since the Slovaks don’t see to have ammunition necessary to make any real noise in the medal round, but it would be nice for him to improve his stock as he heads for UFA status this summer. 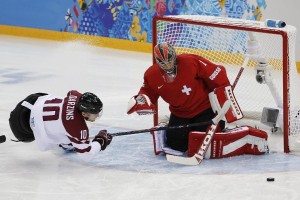 Hiller has always quietly stepped up big for an outmatched Swiss squad on the international stage.  He started the tournament with a 1-0 shutout of Latvia (big deal, I know), and will be heavily relied upon going forward.  The Swiss team clearly doesn’t have the firepower of the big boys, but Hiller has the potential to be an equalizer.  The big ice will make it more challenging, but he will keep them in every game they play.  His unique style and bizarre injuries tend to overshadow the fact that he is a tremendous goaltender who can go toe to toe with anyone else on this list.  The Swiss will always be an upset contender as long as Hiller is in the cage.

Sorry to cop out here, but I have never seen any of the goaltenders for these nations play.  No NHL guys to be found, but if anyone knows anything about them, I would love to hear thoughts or opinions in the comments section.

So, which country do you all feel is strongest in net?  Any of these starters displaced by tournament’s end?  Who will be the biggest difference maker in the medal round?  Would love to hear any and all thoughts you guys may have!