The Rangers came into this game fresh off their Sunday afternoon 7-3 win in this, the most hallowed of baseball grounds. Unfazed, the Rangers came into this game in need of two more points. They came out sloppy (both teams), and didn’t find their legs until the third period, but they eventually put it all together for a big win in this “road” game. And for the second time in three outdoor games, it was a fourth line “fighter” that provided the offense needed to propel the team to victory.

The Rangers had enough guys back on the goal, but a few good plays by the Isles and one blown coverage led to the Isles scoring first. Marc Staal knocked the puck away from Michael Grabner in the defensive zone, but Cal Clutterbuck collected the puck to continue the play. Clutterbuck fell as Staal defended him, but was able to get the puck to Matt Donovan with Kevin Klein all over him. Donovan got the puck over to Brock Nelson on the weak side, who was wide open. Nelson was –I believe– Dom Moore’s guy, but Benoit Pouliot was the closest man to him. Nelson one-timed it right over Hank. 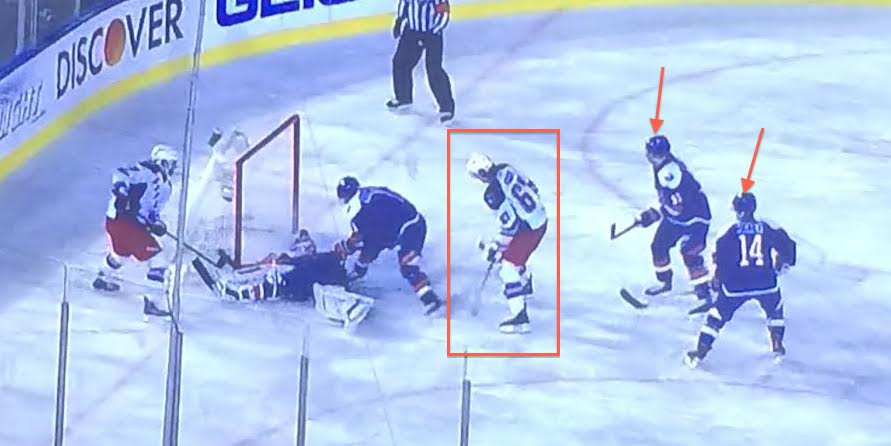 This play really begins when Pouliot forces the Isles into a turnover in the neutral zone, allowing Mats Zuccarello to gain the zone and begin the offensive zone play. Eventually, Derick Brassard put a bad angle shot on net that Nabokov had trouble finding. Lubomir Visnovsky vacated his spot defending Pouliot in front to help recover the loose puck in the crease, but neither John Tavares nor Thoas Hickey came over to assist in covering him. Pouliot collected the loose puck and had the easiest goal he’s had all year. 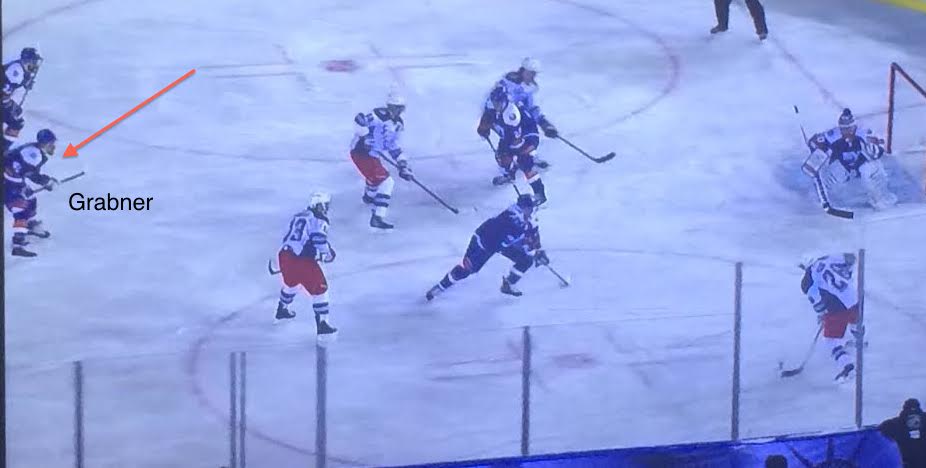 Staal pressured Nelson at the blue line, forcing him to give the puck to Brian Strait. Brian Boyle came over and leveled Strait, creating the 4-on-2 break for the Rangers. Boyle chipped the puck to Danny Carcillo, who got the puck to the near side for Dom Moore. Moore’s shot was low and hard, designed to create a rebound that Carcillo easily banged home. Couldn’t help but notice Grabner just coasting back. He could have easily caught up to Carcillo and tied him up.

The first period was an incredibly slow period, with just 21 registered shot attempts that weren’t blocked. The Isles took control in the second period, creating a wide Fenwick advantage before finally breaking through on the Nelson goal. The chart at the beginning of the third is a bit misleading, as Thomas Vanek was in the penalty box and the Rangers had a pretty good powerplay. By the time the Rangers took the lead, it was closer to a 50/50 split as the Rangers finally started playing hockey. At the end of the game when the Isles pulled Nabby, they created a wider advantage. That’s expected.

Over 100,000 people came out to watch two outdoor hockey games at Yankee Stadium. All 100,000 saw two solid Ranger wins for four huge points in the Metropolitan Division. Perhaps the most important part is that these wins came in regulation. The Rangers now have a three point lead on third place Philly, with a two-win lead in the all important ROW category.