Throughout the year, there have been rumblings about trading Dan Girardi or Ryan Callahan. We’ve mostly been dismissive about them. Over the past two days, we’ve seen a big blowup in the rumors, and received a bunch of emails. So let’s answer all of them: 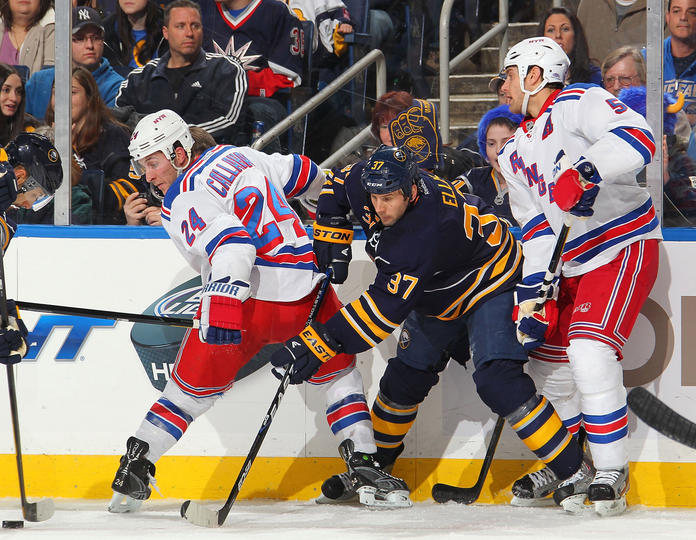 Q: What exactly is going on?

Both Ryan Callahan and Dan Girardi are set to become unrestricted free agents at the end of the year, and both are due for relatively big pay increases. There have been rumblings –from multiple media members, including Bob McKenzie– that the Rangers are entertaining trade offers for both. The rumors are that they will trade them both instead of risking losing them for nothing. It seems that Girardi is the one who will most likely re-sign soon, but Cally’s contract negotiations are not going well.

Q: What do they want in their next deals?

Citing the Larry Brooks article linked above, Girardi is looking for a six-year deal worth about $5.5 million per season. In other words, he is looking for Jay Bouwmeester money. That contract will keep Girardi in  blue until his age-36 season, and is honestly fair market value for Girardi. I had Girardi pegged at $5.5 million when I projected the 2014-2015 payroll. That’s about $2.2 million more than Girardi is making now ($3.325 million).

According to Brooks, Cally is beginning the negotiations . I apparently don’t know math. It’s sven years, $42 million, or $6 million a year. I have Cally pegged at a Dustin Brown type contract, somewhere in the neighborhood of $5.5 million a season, depending on length. Suit touched on the Cally dilemma earlier this week as well.

Q: What are the Rangers offering?

Update: Larry Brooks is reporting the Rangers have deald of $5.2 million for 6 years and $5.7 for 5 years on the table.

There’s no report of what the Rangers are offering Cally, but it’s a safe assumption they will be below $6 million a year.

Q: Will the Rangers trade Cally or Girardi?

Well this is the $64,000 question. The recent hot streak leads me to believe that the club won’t trade either one. Both are critical pieces to a wide open Eastern Conference. Girardi is a top-pairing defenseman who has been part of one of the best shutdown tandems in the game today. Throw in that he’s a right-handed shot, and his value to the Rangers sky-rockets. As for Cally, he’s the captain of the team and there’s a reason for that. You don’t trade your captain or a top pairing defenseman if you think you can make a run in the playoffs.

Q: What can the Rangers get as a return for Cally and Girardi?

Cally’s value would probably be in the same ballpark as Girardi’s, but not quite as high. A young NHL guy and a first round pick is probably the starting point. But again, I don’t think he –or Girardi– get traded.

Q: What will happen if there’s no deal before the trade deadline?

There are three options for the Rangers if they don’t have deals with Cally/Girardi before the trade deadline:

Q: What would you offer them in deals if you were GM?

This one’s easy. The rumored Girardi offers are exactly what I’d give him. I’d lean towards the six-year deal based solely on Girardi’s durability in the past. If the club gets him for $5 million, then their top pairing on defense costs only $9.7 million, and it’s one of the best top pairings in the game. Talk about a bargain.

As for Cally, I’d tell him what Dustin Brown got, and I’d say that’s your market value. I’d be hesitant to give Cally longer than five years though. Durability becomes an issue, and his style of play doesn’t really age well (see: Tucker, Darcy; Drury, Chris; Peca, Michael). I’d sacrifice term for a higher cap hit. Maybe five years, $30 million.

Over the next three weeks –or until one of both re-sign– we are going to see a lot of Girardi and Callahan contract updates. It’s going to be a bumpy ride.