The Rangers started this game the way they started every other game during this 11-4-1 swing: By playing strong hockey and capitalizing on early scoring chances. Problem is that despite the pair of two-goal leads, the Islanders were the team dominating puck possession. The Rangers didn’t catch up on puck possession until the Isles took a pair of penalties in the second period, which eventually led to the second two-goal lead.

Cam Talbot was a bit shaky in this one, but the rest of the Rangers were shaky as well. They had a lot of trouble picking up the right man in the defensive zone, and it led to a bunch of miscues that either wound up in the back of the net or under Talbot. Kevin Poulin wasn’t that much better, but he made some big saves when it counted. It was a rough loss, but there’s no use dwelling over it. 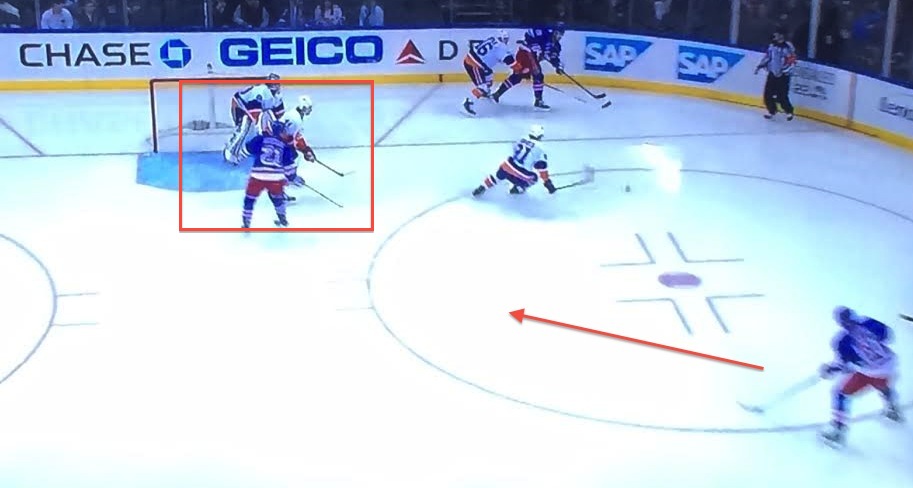 Chris Kreider dumped the puck into the zone and managed to beat both defensemen to the puck in the corner. John Tavares cheated low to keep with Derek Stepan in the slot, even though Calvin de Haan was already covering him in the slot. This allowed Rick Nash to take the inside route on Thomas Vanek to the top of the circle. Kreider hit Nash with the pass, and Nash beat Poulin stick side.

Kreider again began this goal, this time by forcing Kyle Okposo into an offensive zone turnover. Dan Girardi collected the puck and hit Nash behind the defense for the breakaway. I couldn’t get a clear picture on this one, sorry.

Four Rangers were caught watching Okposo and Tavares down low. No one picked up Matt Martin sneaking into the high slot. Tavares just had to get it to his stick for the easy goal. 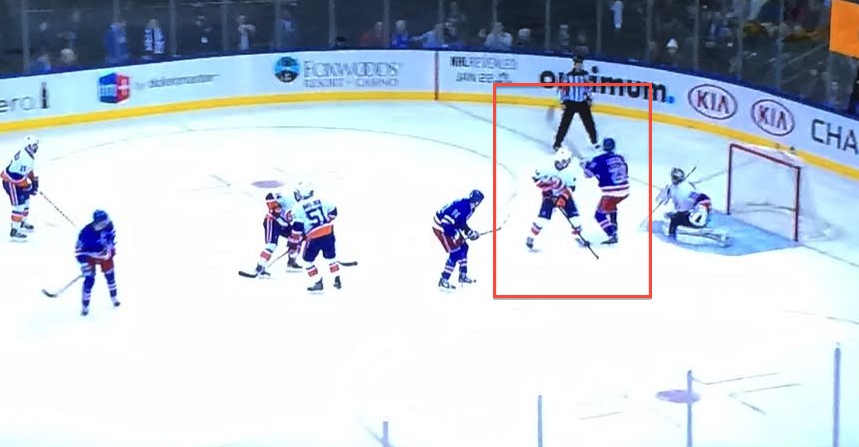 With the Rangers on the powerplay, Derek Stepan collected the puck at the top of the far side circle, skated to the high slot for a better angle, and ripped a shot on goal. Kreider was in front screening Poulin, who never saw the shot. Stepan’s shot hit the post and ricocheted off Poulin’s back, but Kreider was able to get position on de Haan in front and poke it home. 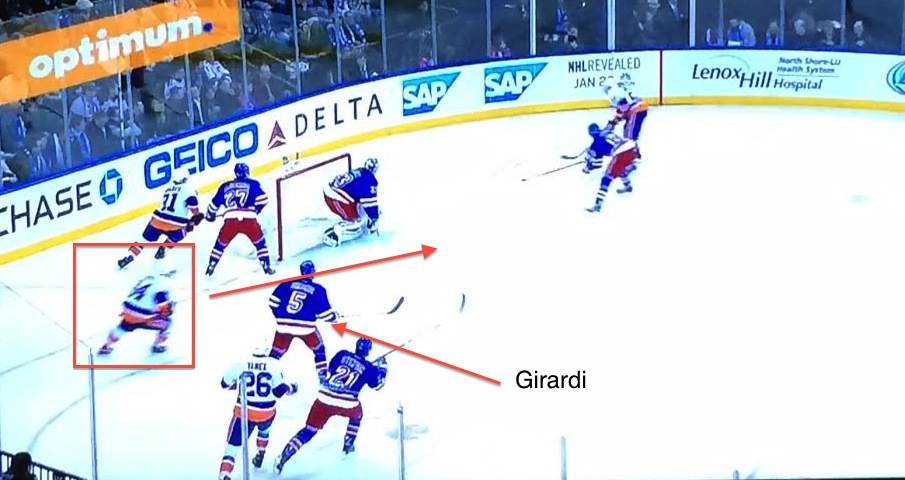 The Isles won a face off clean in the defensive zone to begin their breakout, eventually carrying the puck into the zone. Vanek got the puck to Okposo on the far side, and Thomas Hickey was able to free himself as he cut from the corner to the net for a wide open tip-in goal. Hickey was Girardi’s man, and he simply didn’t pick him up. 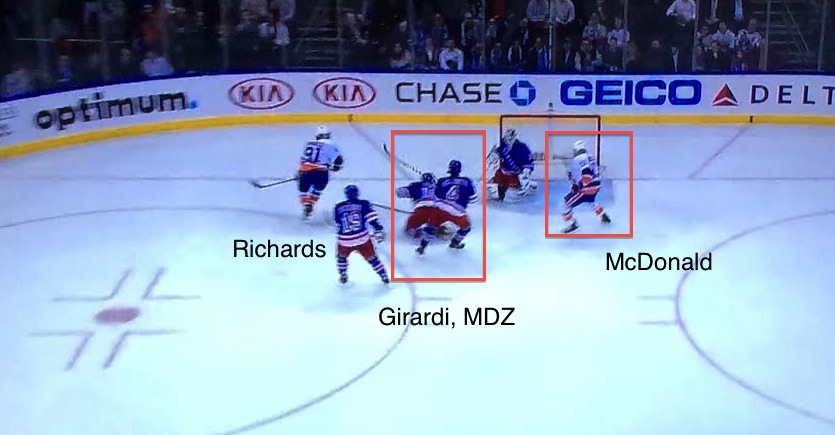 With the Isles on the rush, Marc Staal covered the left side (Colin McDonald) while Michael Del Zotto covered the right side (Tavares). Brad Richards was backchecking hard and eventually caught up tot he play down low. It appeared that MDZ got beat at the bottom of the circle, and Staal vacated his position on the left side to go assist MDZ. This left McDonald wide open in front with all day to bang home the rebound created from Tavares’ shot. Del Zotto didn’t have enough time to cover. You can argue that Staal should’ve stayed with McDonald, and the Rangers should have surrendered the bad angle shot. You can also argue that Richards should have covered McDonald, but that’s a tough sell since the defensive coverage switch didn’t happen until he was already on top of the play. 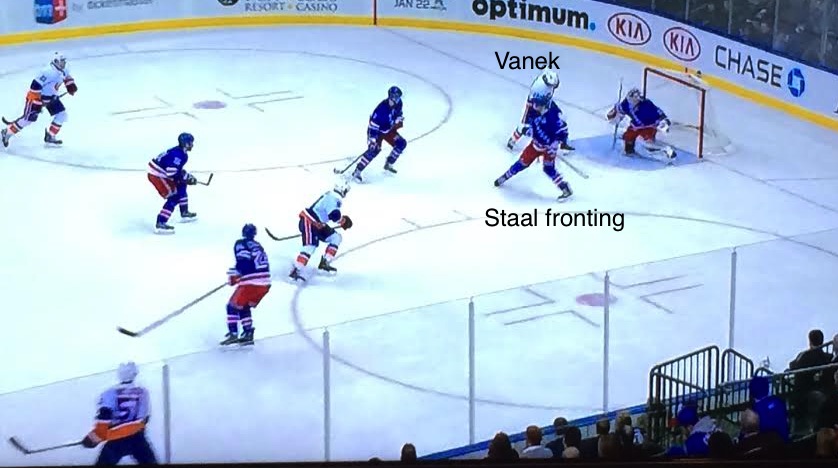 This was a nice play by the Isles to take advantage of the Rangers fronting on the penalty kill coverage. Frans Nielson hit Tavares in the high slot, who tipped the puck to Vanek behind the Rangers defense. Vanek just had to go around Talbot for the eventual winner.

This is the first time in a long time that the Rangers didn’t dominate puck possession in the early going. The chart here may show a pretty even split by the time the game ended, but this chart is for all situations. If we break it down to even strength, the Isles had a 52% Fenwick advantage and 53% Corsi advantage. At 5v5 close (+/- 2 goals), the Isles again had a 52% Corsi advantage (Rangers with a 51% Fenwick advantage). Just one of those games.

This was a tough loss to take. The Rangers were abnormally sloppy, and the Isles took advantage of that from beginning to end. There were a lot of defensive zone breakdowns that led to goals, and the goaltending itself wasn’t all that strong. These losses happen, and hopefully it is a one-off game. Just move on and on to the next one on Thursday against the Blues.