I guess we could have seen this coming after the game in Ft. Lauderdale on New Year’s Eve. The Rangers were sloppy in that game, but managed a win because the Florida Panthers are awful. They played the same way last night in Pittsburgh, and got slaughtered for their (lack of) effort. The Rangers turned the puck over more often than I can remember, and several of those turnovers resulted in goals against.

Turnovers weren’t the only issue. Too many Rangers were coasting, not doing dirty work, not cutting to the net, and blowing coverage in the defensive zone. In short, this was an awful game for the Rangers. I don’t know what else to say here. 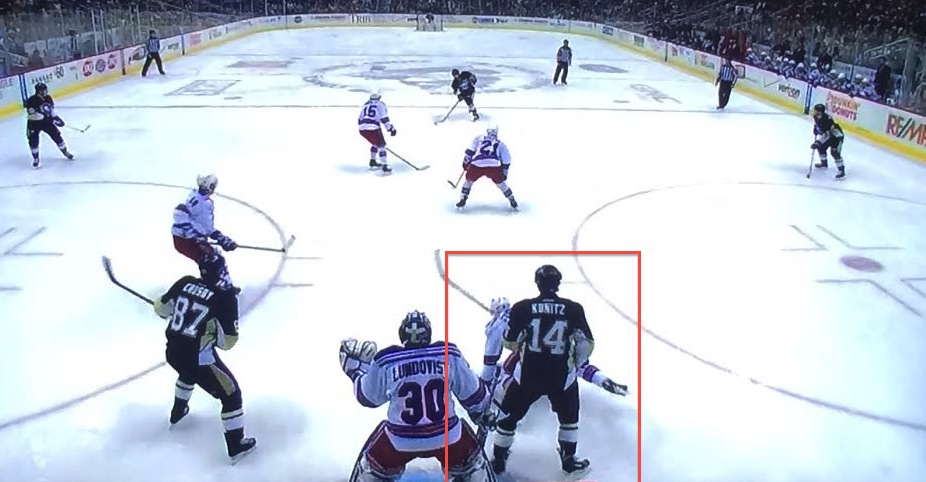 With the Penguins on the powerplay, Derek Dorsett blocked a shot that clearly hurt him. Unfortunately he couldn’t get off the ice, giving the Pens a defacto 5-on-3.5. Eventually the puck worked itself to Matt Niskanen at the point, with Sidney Crosby and Chris Kunitz in front and the Rangers in a diamond formation (Anton Stralman lone man in front). Kunitz gave a little cross check to Stralman, knocking him down –and giving Kunitz some room– just as Niskanen took his shot. The shot deflected off Derek Stepan’s stick, off Crosby’s skate, and over to the open Kunitz for the tap-in goal. A lot of lucky bounces there.

Derick Brassard couldn’t handle the puck in the neutral zone, resulting in a turnover. After the puck wound up behind the Rangers net, both Stralman and Marc Staal went behind the net. Jussi Jokinen cut to the front, where neither Rick Nash nor Benoit Pouliot covered him. Brian Gibbons made a nice backhand pass to Jokinen who picked a corner on Hank. All five on-ice Rangers messed up here.

Carl Hagelin mishandled the puck in the neutral zone, creating another turnover for the Penguins to capitalize on. This time around, Gibbons was able to feather a pass through the defense to Jokinen. Jokinen didn’t handle it cleanly, but managed a backhand shot attempt that rolled up Ryan McDonagh’s stick, off his shoulder, and into the back of the net. Another lucky bounce goal for the Penguins, but good teams create their own luck. No picture on this one, nothing came out clearly. Sorry. 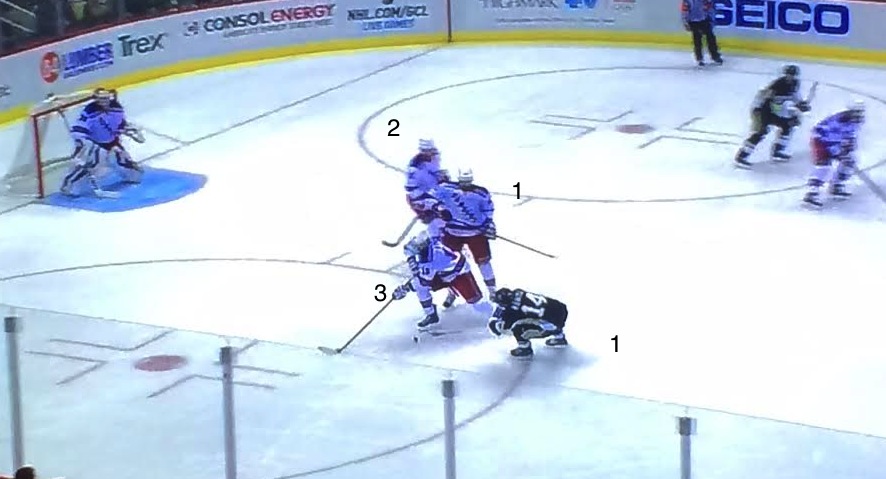 As the Rangers powerplay expired, Staal turned the puck over in the defensive zone to a pressuring Chris Kunitz. Both Nash and Stralman were right on top of the play, but neither decided to help or provide puck support. The result was Kunitz gaining control of the puck after a 1-on-3 situation, and beating all three guys with a pass to Crosby for the semi-breakaway. Crosby roofed the puck with a ridiculous backhand over Hank’s glove.

Brassard and Pouliot had some strong board work to jar the puck loose from former Ranger Taylor Pyatt behind the Penguins net. Brassard was able to poke the puck to Pouliot, who got the puck off the boards to Mats Zuccarello at the top of the circle. Zucc ripped a beauty of a shot past Marc-Andre Fleury for the goal. No picture for this one either, sorry but the camera angles were off and were focusing too much on one player and not the play itself.

If one Ranger showed up in this game, it was Zuccarello. He simply took control of the play, and moved the puck from the half boards to the point. As Zucc was working with the puck up high, McDonagh slid down low behind the defense, and put himself in position in front of the net. Zuccarello saw this happening, and hit McDonagh with a perfect pass for the easy deflection goal.

Just as you think the Rangers are going to make this a game, Crosby ensure that it won’t be. With the puck down low in the Rangers zone after Staal failed to completely clear the zone, Crosby simply overpowered the Rangers in front of the net to generate a shot on goal, and then poke the loose puck to Kunitz on the back door for the easy goal. This was the fifth goal of five than Henrik stood no chance.

You may think that the Rangers controlled play here, but score effects play a big role in this Fenwick chart. Defensive zone breakdowns and turnovers led to a 3-0 lead for the Penguins, who simply backed off a bit, allowing the Rangers to generate more shot attempts and take over the Fenwick lead. When the Rangers got within two the Pens turned it on a bit, evidenced by the sharp uptick in the blue line. Suffice it to say: The Penguins controlled this entire game.

The Rangers doomed themselves again with bad defensive zone coverage, turnovers, and general lackadaisical play. That said, this team is still 4-2 in their last six and still have a good chance of making the playoffs. Of course, in order to make the playoffs they need to start doing the right things on a consistent basis. That seems to be too much to ask lately. This was also just the 13th game with Staal, Nash, and Callahan all in the lineup.