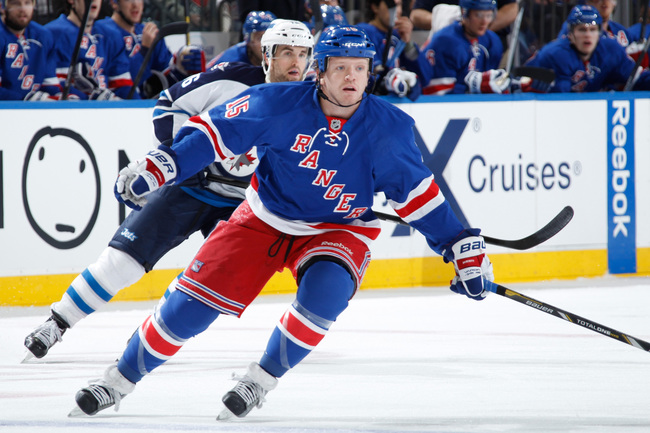 When healthy, Derek Dorsett has been everything the Rangers hoped for

Like many parts of the 2013-2014 roster, the bottom-six forwards have struggled through long stretches of the season thus far.  Part of that can be attributed to players being used out of place and in unusual situations, but the team hasn’t gotten consistent play out of many of its depth forwards for most of the year.  That seems to be changing over the last few weeks, and has been as instrumental to the team’s mini turnaround as anything else.

Boyle will forever be a polarizing player amongst Ranger fans because he has hands of stone and doesn’t drive opponents through the boards with his massive size.  You can’t really judge Boyle fairly until you accept those two facts of life, which many refuse to do.  But Boyle is a very useful player in many other areas.  Though this hasn’t been his finest year, Boyle is still being relied on as the team’s top defensive forward, plays well on the penalty kill, is the best faceoff man on the team and drives possession.  He is guilty of being a passenger at times this season the same as nearly every player on the roster, but for the most part, Boyle has been use usual steady self.  Still, scoring just one goal all year is pretty hard to do.

Three weeks ago, I wouldn’t have hesitated to give Pouliot an F-.  Now, it’s hard to imagine the lineup without him.  Pouliot has been white-hot of late, with goals in four of his last five games and a seven-game point streak to boot.  His contributions on the offensive end have been a huge unexpected surprise in December, and Pouliot suddenly looks like a different player with his newfound confidence.  We all knew of Pouliot’s history of inconsistency when he arrived, and it’s very likely he’ll go through another horrible dry spell before the year is over.  But in the span of just a few weeks, his point total suddenly looks very respectable for a depth guy.  The biggest gripe I still have with Pouliot is that he’d been a very good possession player in the past – one of the best in the league, actually – and he hasn’t been good in that department for New York.

No, Dorsett isn’t Brandon Prust.  But he just might be better.  OK, so Dorsett might not be as good a fighter as Prust was, but who cares?  In every other aspect of the game, Dorsett has been Prust’s equal or better.  Injuries have hampered him at times, but Dorsett has still been the most consistent bottom-six forward all year and has chipped in virtually every way imaginable.  Dorsett has been one of the team’s best forwards on the forecheck, an ace penalty killer and an effective pest.  He’s come as billed – Dorsett wears his heart on his sleeve every night.  Though his point total doesn’t reflect it, I think Dorsett has the ability to put up decent offensive numbers as well, and we might see that in the second half.

It would be hard for anyone to get into a rhythm when they’re driving back and forth from Connecticut every few days, but that’s the hand Miller has been dealt this year.  He’s in that tricky stage for a prospect where he’s way too good for the AHL, but still not quite good enough to make a consistent impact at the NHL level.  To Miller’s credit, he’s kept his head down and kept working at his game, and his latest stint on Broadway has been his best.  In an ideal world, I’d still like to see him spend the remainder of the season in Hartford, but the Rangers are obviously facing a ton of pressure to win now and think he’s a better option than, say, Taylor Pyatt.  I can’t grade Miller too harshly since I think he’s in over his head (through no fault of his own), but he hasn’t been lighting the world on fire.

It’s frankly amazing that Pyatt actually played 22 games this year.  He’s clearly not an NHL caliber player anymore, and I think there’s a reasonable chance that I could beat him in a footrace.  I don’t think Pyatt’s struggles were for lack of effort – he was one of the team’s more willing players to engage along the boards and at least knows what he should be doing, he just can’t execute.  Speed is Pyatt’s greatest weakness, but in general the game has passed him by.

All things considered, it’s impressive that Moore has returned to full-time NHL duty this year.  He’s had a lot of personal stuff to overcome, yet Moore is back playing in the best league in the world, and playing close to his old level.  Moore has contributed next to nothing offensively, but he’s been pretty reliable in his own zone and has added a bit more speed to the bottom line than the Rangers have had in the past with the likes of Boyle and Pyatt.  The team is clearly best off with three set scoring lines and Moore, Boyle and Dorsett as the bottom trio, and as long as Moore has been kept in that role, he’s been OK.

It seems a little surprising that Hagelin actually ranks second on the team in goals after missing the first month of the season recovering from an injured shoulder.  His first two weeks back in the lineup were his best of the season, as Hagelin was chipping in on the scoreboard and tilting the ice the way he did last year.  Unfortunately, we haven’t seen much of that out of #62 over the last month.  Part of the issue is that Hagelin has been playing recently with less than ideal linemates, but his game had fallen off while playing in the top-six previously.  To me, Hagelin is a player who really needs to play his own game, because he brings such a unique skill set that pigeon-holing him really deteriorates his effectiveness.  John Tortorella understood that, and was more than happy to have his defensemen toss alley-oop passes down the ice for Hagelin to chase down.  So far, it seems like Alain Vigneault hasn’t figured out how to best harness Hagelin’s abilities.  To be fair though, I don’t think Hagelin’s up-and-down season is all on the coach.  Hagelin has certainly been one of the players that shows up some nights, and is just along for the ride on others.

Like Pouliot, Brassard had a very underwhelming season until a few weeks ago.  But when he’s playing like he has recently, it’s clear as day how important Brassard can be to the lineup.  Unfortunately, that’s exactly what we knew about Brassard when he came over from Columbus.  He has all the ability in the world, but goes through absurd dry spells and hot streaks throughout the course of the year.  The Rangers need much, much more consistency from Brassard, but he’s proven to be a valuable offensive weapon at times.