The Rangers continue to win games, this time with a 4-2 win over the Columbus Blue Jackets. Despite the fact that the Rangers never trailed, this was a very tight game. Neither team had a huge puck possession advantage throughout the game. New York actually had a fairly large puck possession margin in the second period, but Columbus roared back as they pushed to tie the game in the third.

Cam Talbot was again solid in net, proving to be a very capable backup to Henrik Lundqvist. There will be some that point to lucky bounces –specifically that third Rangers goal– as the reason why they won, but a win is a win is a win. Bounces will always be a part of the game, and you create your own luck. The Rangers, at the time of the Mark Letestu own-goal, had a pretty decent sized lead in puck possession. When the puck is in the offensive zone that much, good things happen.

On an innocent 3 on 3 rush into the offensive zone, Brad Richards was able to gain the zone and hit Ryan Callahan with a long cross-ice pass. R.J. Umberger was covering Cally, but the pass –and Cally– eluded him. Cally moved in, dropped his shoulder to shoot, and fed the puck directly to Carl Hagelin’s stick in front of the net. Hagelin got so wide open by making a move on Fedor Tyutin to get to the inside. Easy tap-in goal.

This goal was the product of a bad change for the Rangers. With the Jackets on a 3-on-2 rush, Hagelin backchecked to make it a 3 on 3, but the other two Rangers went to the bench for a change instead of coming to play defense. Brandon Dubinsky hit the trailer Fedor Tyutin in the high slot, who stickhandled around a diving Hagelin and beat Talbot.

With the Rangers on the powerplay following the Tyutin headshot on Taylor Pyatt, the 1-3-1 went to work. Sergei Bobrovsky was distracted by Cally in front, and after some good puck movement, Ryan McDonagh let go a shot from the point that Cally deflected past Bob. Guys in front, shots from the point. It’s refreshing.

Also worth noting that Mats Zuccarello was left wide open in the slot as well.

Mark Letestu just shot the puck into his own net. Bob wasn’t on the post either. Luck is luck, and a goal is a goal. 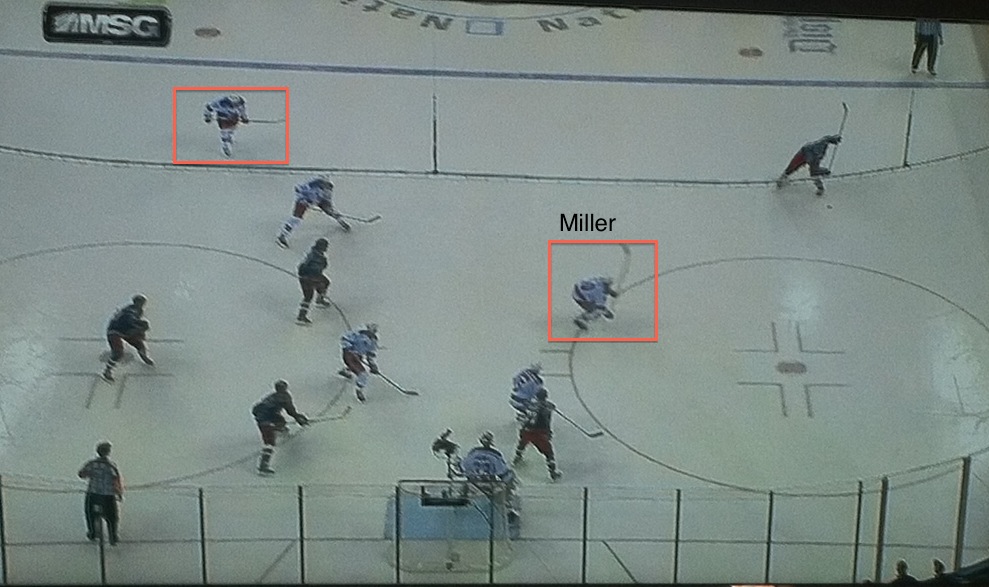 I don’t think this goal qualifies as a defensive miscue for the Rangers. Columbus had a good shift, and put on a lot of pressure. You can argue that J.T. Miller was in No Man’s Land with his positioning, but Ryan Murray made a very smart play to wait for Miller to slide past him before ripping his shot. If he didn’t wait, Miller would have blocked the shot. Another thing to notice is the guy on the top left (unfortunately do not recall who that was). He over-committed a bit on the pass across to Murray, and had the shot been stopped, there may have been an issue clearing the rebound. The Rangers were outnumbered on the weak side.

This is a bit of an interesting graph. Over the past few games, we saw the Rangers get dominated early in puck possession, but turn it on late in the first through the end of the game. This time around, the Rangers and Blue Jackets were neck and neck until the Rangers started tilting the ice in their favor int he second. But New York’s inability to control face offs led to Columbus tilting the ice back to them in the third. Luckily the Rangers were able to hold the lead.

With the win, New York has won two in a row, five of six, and six of eight to climb back to .500. After starting the season 3-6, the team is now 8-8 with a pair of very winnable games against Florida and New Jersey coming up. We preached the 20 game rule during that awful nine game road trip. Seven games after that trip the Rangers are playing some great hockey, and they still haven’t dressed a fully healthy squad yet.