Rangers goaltending nothing short of brutal 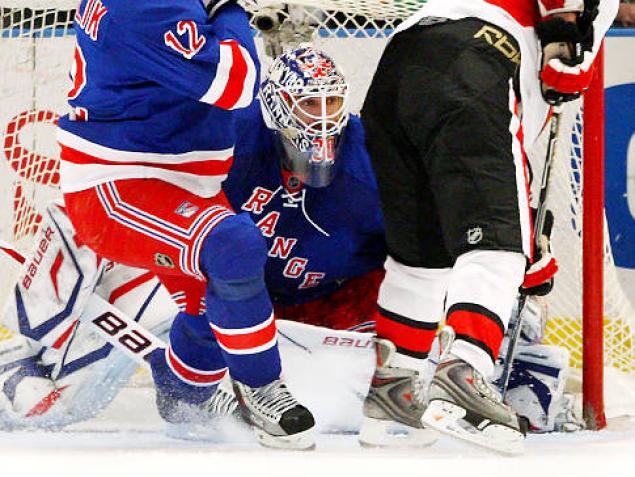 Lundqvist: must do better. (Bennett/Getty)

Henrik Lundqvist seems to have forgotten how to control rebounds, and his decision making around the net has been abysmal. Martin Biron can’t even stop a shot from the blueline.  Every aspect of the Rangers (Brad Richards aside) has been awful to start the year, but it has to start and end in net, and the Rangers are nowhere near good enough in goal so far. It’s been that bad that maybe Glen Sather is reducing his next contract offer to Henrik Lundqvist as we speak.

To be fair, the Rangers defense has been almost as bad; coverage has been terrible, positioning and decision making even worse, and the Rangers goaltending tandem have had opposing players open in front and have often faced far too high a quality of shot. That said, it comes back to your goaltender giving you a chance and neither goalie has done that so far.

For all the teams other issues this team current has the Rangers goalie combo have already let in far too many ‘soft goals’ at this stage of season. No goaltender is perfect but when your starting goaltender earns close to $7 million (and is looking for a max contract in his next deal) it is fair to expect more – especially when the team in front of him is in a period of transition.

After just five games and a whopping twenty five goals conceded, the pressure is mounting for the Rangers, for Alain Vigneault and the goaltending situation. The Rangers still have a great goaltending situation but until Lundqvist and Biron start actually stopping some pucks with regularity the awkward questions will start to get asked with more regularity.