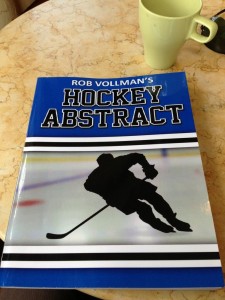 Like it or not, advanced statistics are here to stay and are only going to continue growing in popularity.

There’s overwhelming evidence that basic metrics for puck possession are far more indicative of long-term team and individual success than the number of goals scored on a yearly basis.

Dave has done a great job of introducing us all to some of these new #fancystats, but if you want to learn more, than I encourage you to check out Rob Vollman’s brilliant new book, Hockey Abstract.

If you do, you’ll find that many of the confusing acronyms you’re seeing referenced more and more aren’t really all that complicated, and actually provide extremely valuable information.

It’s understandable that many fans have been slow to embrace these unfamiliar new statistics, but the strength of Vollman’s book is that he explains things in simple terms that anyone can understand, translates those metrics to relevant real world examples and avoids bogging down with complex formulas.

You’ll learn more from Vollman’s book than you did from any statistics textbook you had in school and it is far from a boring read. Fascinating questions like “Who is the luckiest team?” and “Who will finish first next year?” make up many of Hockey Abstract’s chapters.  The book also contains mountains of evidence and examples that help predict players’ future production and reveal which players are over- and undervalued.

It should be emphasized that though Vollman is a leader of the advanced metrics movement, even he repeatedly admits that #fancystats should be used in tandem with traditional measurements and the eye test. There’s no denying that, but it’s also a sure thing that reading Hockey Abstract and beginning to learn the benefits of the new wave of statistics will make you a more knowledgeable fan.

You can buy a hard copy of Hockey Abstract on Amazon, or download a PDF here.