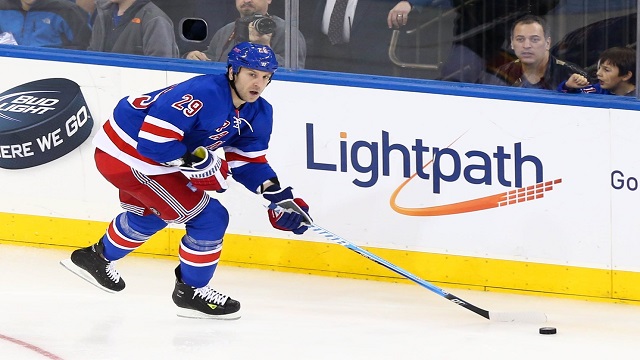 As the offseason progresses, the Rangers are going to have tough decisions to make. They currently have 18 players signed for next season to $51.5 million in cap space. With the cap at $64.3, the Rangers have $12.8 million in cap space to address roster needs, including re-signing their key RFAs. They are in better shape than they were before the Marian Gaborik trade, but addressing their needs may mean seeing a nice piece of the puzzle let go. Ryane Clowe is one of those forwards who may fall on the outside looking in.

When the Rangers traded for Clowe the day before the trade deadline, they were acquiring a big body who is dominant along the boards. Although Clowe hadn’t scored in San Jose, he immediately chipped in offensively with the Rangers (3-5-8 in 12 games). A concussion sidelined him for the last game of the regular season and all but two games in the postseason. Clowe does not have a long injury history, and this was his first concussion. The real question is whether or not the Rangers saw enough in Clowe to warrant re-signing him to what would likely be a contract around $4 million.

Another aspect to consider with Clowe is the draft pick compensation heading to San Jose in the trade that brought him to New York. Should the Rangers re-sign Clowe, they will have to send a 2014 second round pick to San Jose. If he does not re-sign, then it’s just a fifth round pick headed to the Sharks. This is something that Slats is considering, but if he –and the new coach– believe that Clowe is critical to a Cup run, then he will be re-signed.

Therein lies the biggest debate for Clowe: Will the new coach see him as a useful piece? That’s something no one can answer at the moment. If he’s a useful piece to the coach’s style –and there’s no reason to think any coach wouldn’t be able to use him– then he will be a Ranger at the right price.

Clowe’s eight points in twelve games almost doubled his point total for the season and represented a significant bounce-back after an atrocious year. With the Rangers, Clowe managed to show that he can drive puck possession as well, with a 7.5 RCorsi. He did this with the fifth-toughest assignments (.160 Corsi Rel QoC) with 52.3% OZone starts. It is interesting to note that Clowe played with some other puck possession drivers (Corse Rel QoT of 3.124), but that’s still very effective.

For Clowe to be a good fit for the Rangers, it will all come to price. The Rangers are rightfully in win-now mode, but they also need to keep an eye on the future. Signing Clowe to a long-term deal –considering his concussion and off-year– is a risky proposition, but there’s no guarantee that another team with oodles of cap room (see: Islanders, New York/Brooklyn) won’t throw extra money at him to bring him on board.

Slats likely won’t go above Ryan Callahan’s $4.275 million salary to keep Clowe in Ranger blue. Clowe will be 31 by the time next season starts, and this is likely his last chance at a big payday, so Clowe is really a big toss up for the Rangers. If he can be had at a price that does not kill the Rangers cap, then it would be very beneficial to give Clowe another contract. That is a big if.