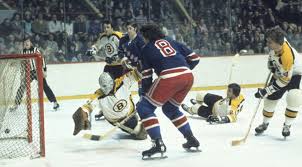 Today the Rangers look to avoid going back to MSG down 2-0. In game 1 the Blueshirts stayed with the Bruins until OT where they were out-shot 16-5, half of which was on that one power play. Although it wasn’t a great game by any means, I thought the Bruins looked very beatable. Sure they have depth and an ability to roll four lines, but at no point did I feel like any of their guys were legit threats to send us home packing. That nervousness for me just wasn’t there the way it was against the Caps, or even the Devils or Senators last year. I know that’s not much of an analysis, but that’s what the gut was telling me. Anyone feel differently?

Side note: The media has made a big fuss over Henrik Lundqvist’s losing record in OT during the playoffs. Interesting that no one is mentioning Martin Brodeur’s career playoff OT record of 12-21 (.364)