This was a tough one. The Rangers played a very good game again, but came up short in overtime for the second time this series. After giving the Rangers a 1-0 lead early, Brian Boyle undid his goodwill by taking a stupid penalty by slashing Mike Ribiero. Naturally, the Caps scored on the powerplay, and eventually won it in overtime. Henrik Lundqvist stood on his head again, but Braden Holtby was also equal to the task. Both made some great stops to keep the game tied. Now it’s do or die in New York on Mother’s Day. On to the goals: 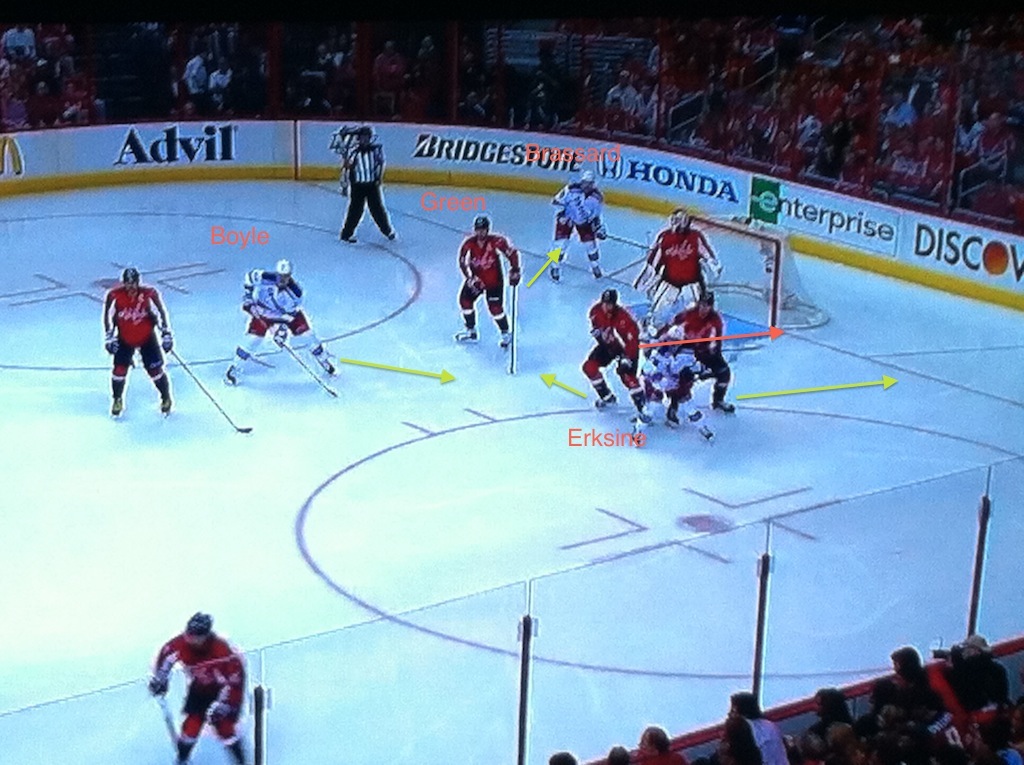 One step in the wrong direction, goal.

The Rangers had a good cycle on this shift, and when the puck worked itself to Dan Girardi at the point, he wrapped it behind the net. Brian Boyle was camped out in front, and was John Erksine’s man. Nicklas Backstrom went behind to get the puck –which is one of the options he had– but the problem was that Erksine also bit on the puck. When the puck got to Derick Brassard, Mike Green made the right play to go to him. But with Erksine biting, ever so slightly, on the puck behind the net, it left Boyle with a second in front alone. This is a bang-bang play, and Erksine’s slight missteps gave Brassard and Boyle all the time they needed. The green arrows represent the correct moves made by each player involved, the red arrow represents the misstep that Erksine took. It was a slight misstep, but in the NHL, it’s enough for a goal. 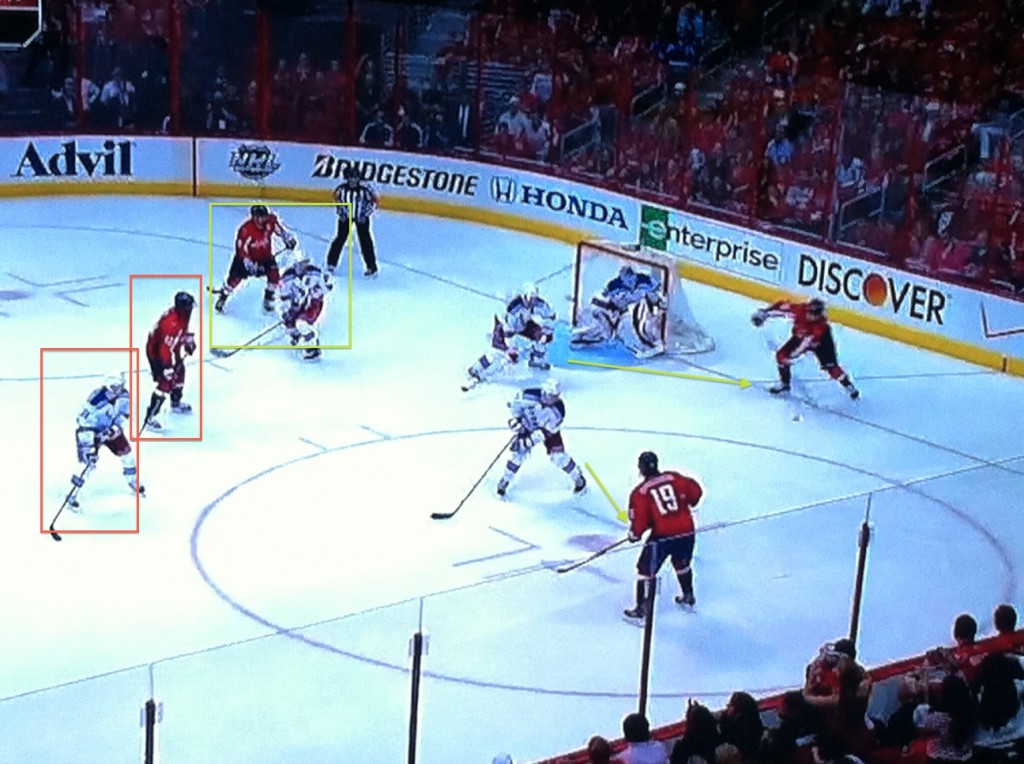 After Boyle takes a stupid retaliatory penalty for whacking Mike Ribiero in the back of the leg, the Caps lethal powerplay went to work. After a nifty passing play between Backstrom, Marcus Johansson, and Joel Ward, the game was tied. The Caps set up in their 1-3-1, but with the puck on Backstrom’s stick on the half-boards and the Rangers in a diamond PK, the Caps shifted, and Johansson went to the near-side goal line, and Alex Ovechkin cheated in from his usual spot on the weak side face off dot. With Ovechkin cheating in, Ryan Callahan has to stay with him. With Ryan McDonagh on Backstrom and Girardi on Johansson, it is Derek Stepan’s job to tie up Ward in the middle. This was a bang-bang play, so you can make the argument that Stepan didn’t have time to react after Backstrom’s pass to Johansson. I’m inclined to agree with that sentiment –this happened very quickly and very few would have time to react and tie up Ward in the middle– but the fact is that Ward was Stepan’s responsibility in this situation. 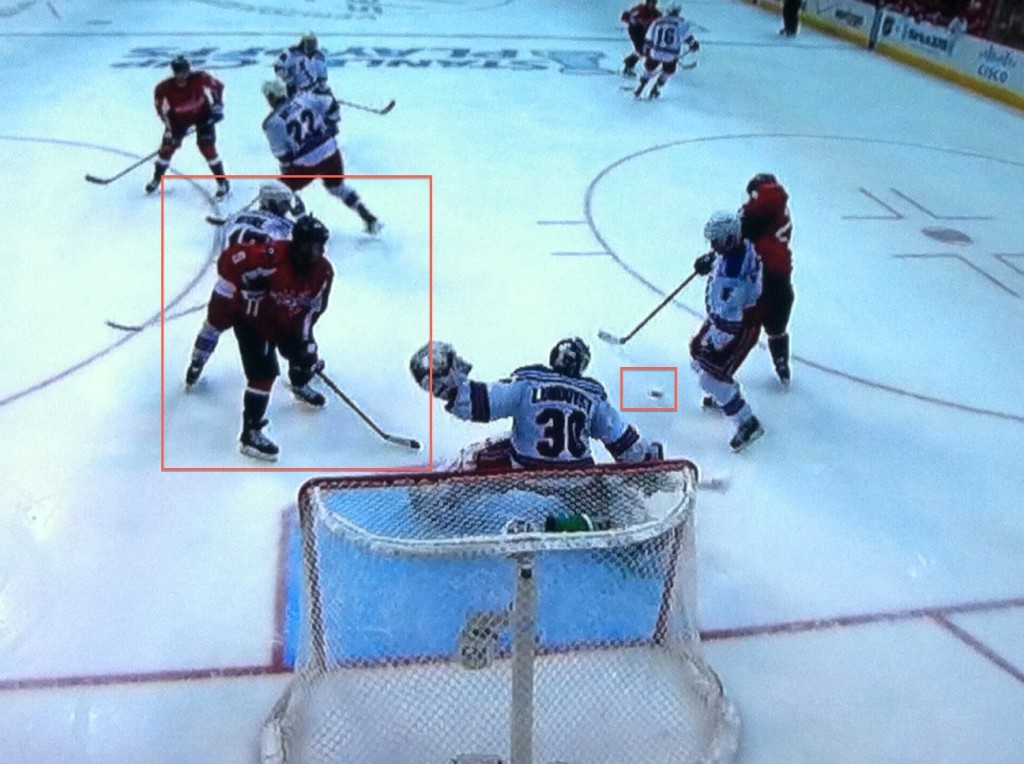 This goal was a combination of good luck and good positioning for the Caps. After John Moore blocks a Mike Green shot, he’s a bit hobbled, which allows Mike Ribiero to gain strong position on him in front of the net. From the picture, you can see he’s in front of Moore with his stick on the ice, waiting for the puck. That split second where Moore was in pain and unable to gain position allowed Ribiero to get to this spot. The luck factor was the shot from the point bouncing off Anton Stralman and directly to Ribiero, who had an empty net. Tough to fault anyone on this, hockey happens sometimes.

It’s win-or-go-home tomorrow at 4:30, as the series shifts back to The Garden with the Rangers trailing 3-2 in the series. The home team has held serve in the first five games this season, and there’s no reason to believe the Rangers will be unable to walk away with a win tomorrow. Many teams have lost Game Five and won the series.