Goal breakdown: Rangers even the series in a heart-stopping game

Game Four was one of the best games the Rangers have played all year. They came out strong, played a physical game, played good defense, and generated a lot of scoring chances. The game itself was very exciting as well, but the Rangers appeared to trade chances with a Caps team that is much more skilled than them. This is what caused the Rangers to blow their initial two goal lead and almost blow their second two goal lead. They eventually held on in a frantic final three minutes to even the series.

These were two HUGE wins for the Rangers on home ice to even the series. Any loss at home would have all but clinched the series for the Caps. Now, the Rangers head back to Washington with a lot of momentum heading into Game Five.

Braden Holtby, who is usually good with the puck, handled the puck at the boards and tried to clear the puck up the middle. Taylor Pyatt knocked down the clearing attempt, and it went straight to Carl Hagelin with Holtby out of the net. Hagelin’s shot was blocked, but Brad Richards was able to put it into the open net. There is no picture on this because A) It’s not needed, and B) They were blurry. Sorry about that. 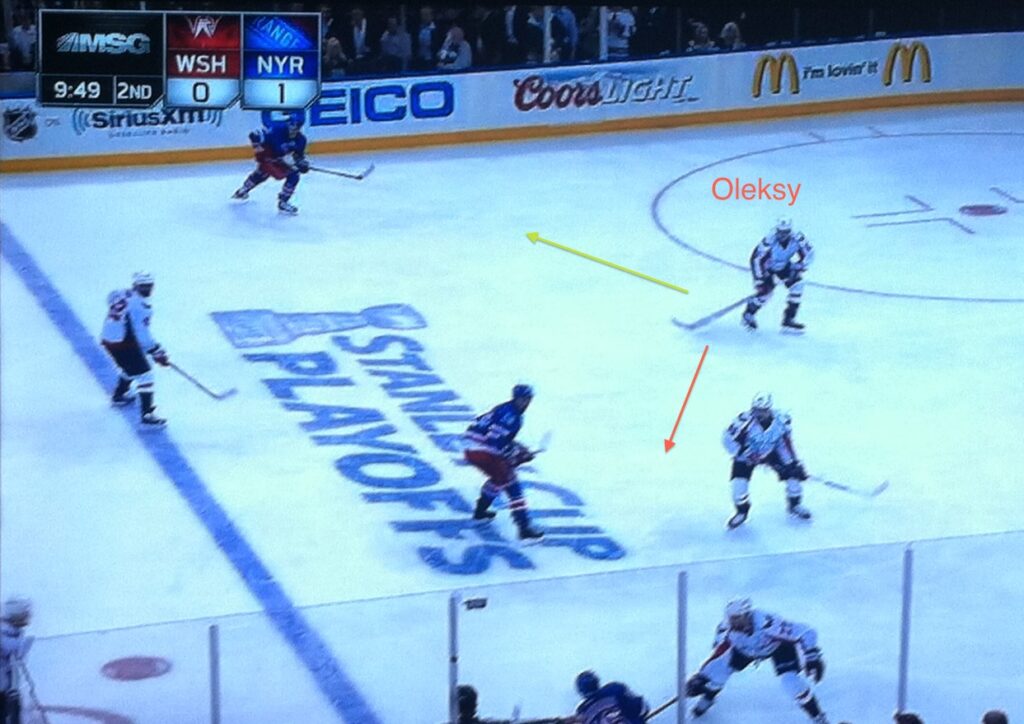 After the Rangers ice the puck, they managed to gain control in their own zone and generate an offensive chance. Ryane Clowe stickhandled around a few Caps and got the puck to Derick Brassard at the blue line. Hagelin broke down the far side, where he was supposed to be covered by Steve Oleksy (green route). Oleksy instead bit on Brassard (red route), and left Hagelin wide open when Brassard’s pass hit him at the top of the circle. Hagelin ripped a slapper over Holtby’s glove for the two goal lead. 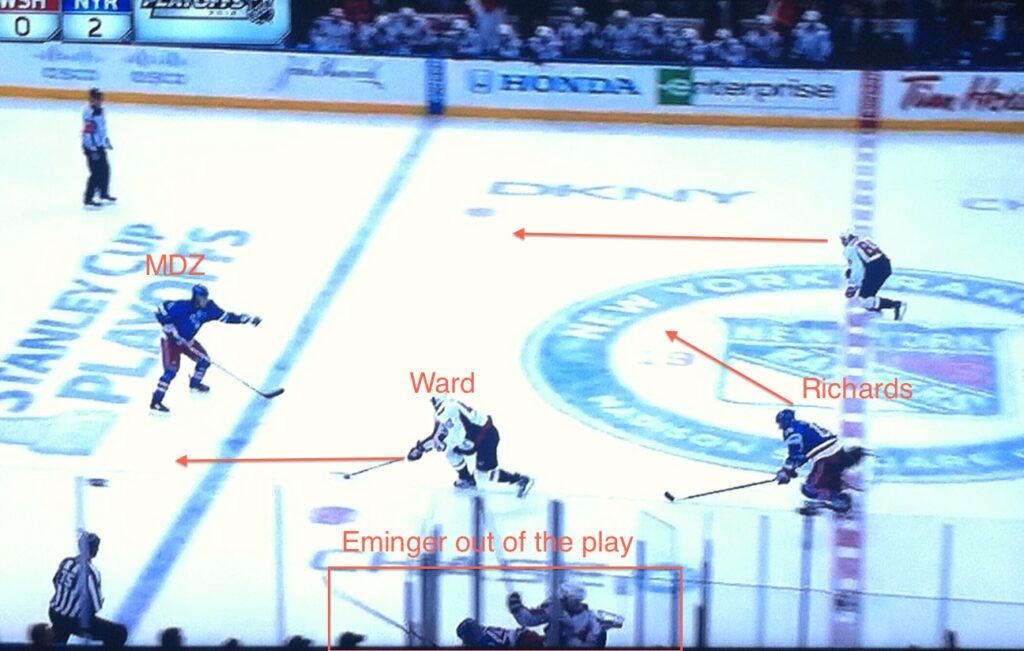 Ryane Clowe gives made an errant pass in the offensive zone. Steve Eminger couldn’t handle the loose puck in his skates and keep the zone, allowing Jason Chimera to break the puck out. Chimera got the puck to Joel Ward for a two on one, with Brad Richards backchecking hard. Del Zotto directed Richards to Mathieu Perreault, as he should. MDZ did a decent job taking away Ward’s chance, but Ward made a great play to stickhandle around a sliding MDZ and charge to the net for the stuff-in try. Richards was already there, as he was covering Perreault, but left him to block the attempt from Ward. The puck squirted to Perreault at post who stuffed it in. I’m not a big fan of sliding on defense, and MDZ got exploited for it, but he wasn’t exactly playing the two on one poorly. That slide though, I still want to know why half of the defense thinks it’s a good play.

This was an odd one. The Caps apparently kept the zone on a very borderline potential offsides –to be fair, the Rangers almost got caught with too many men on the ice– and Mike Green was able to get the puck to Troy Brouwer. Brouwer skated through two Rangers (Derek Stepan and Anton Stralman) and rifled a backhand past Henrik Lundqvist. Backhands are almost impossible to read off the stick, and that was a good shot. No picture on this one, as I couldn’t get a good angle on the potential offsides. 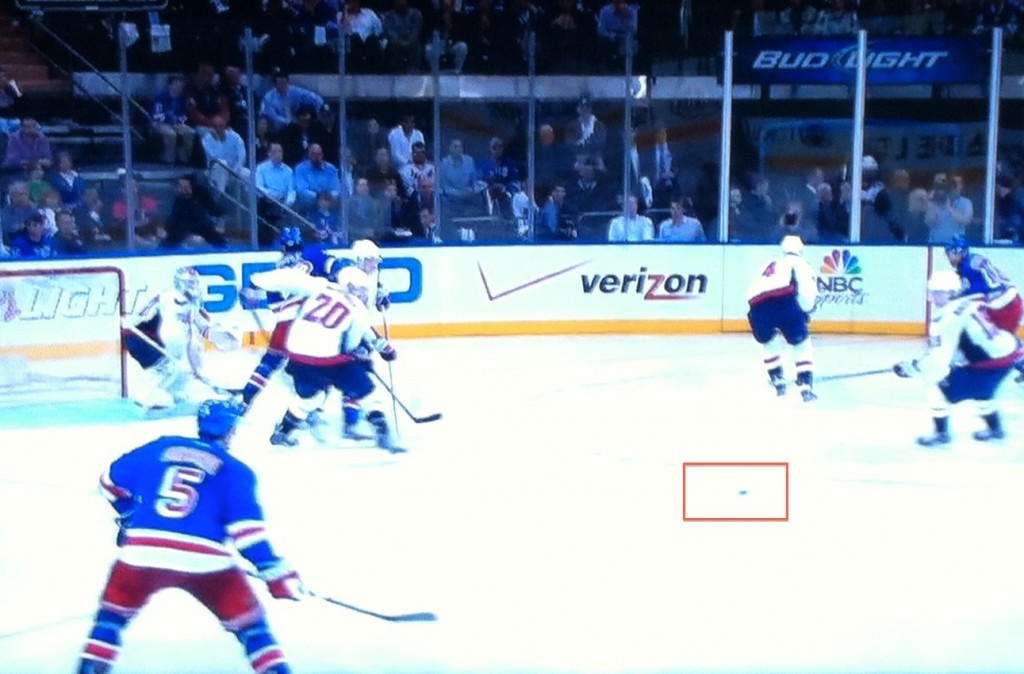 With the Rangers on the powerplay, the Blueshirts moved the puck very well and cycled the puck around to open ice. Brassard eventually collected the puck from Mats Zuccarello at the off-wing boards, and saucered a perfect backhanded pass to Dan Girardi at the weak side point. Girardi just one-timed it right past Holtby for the lead. 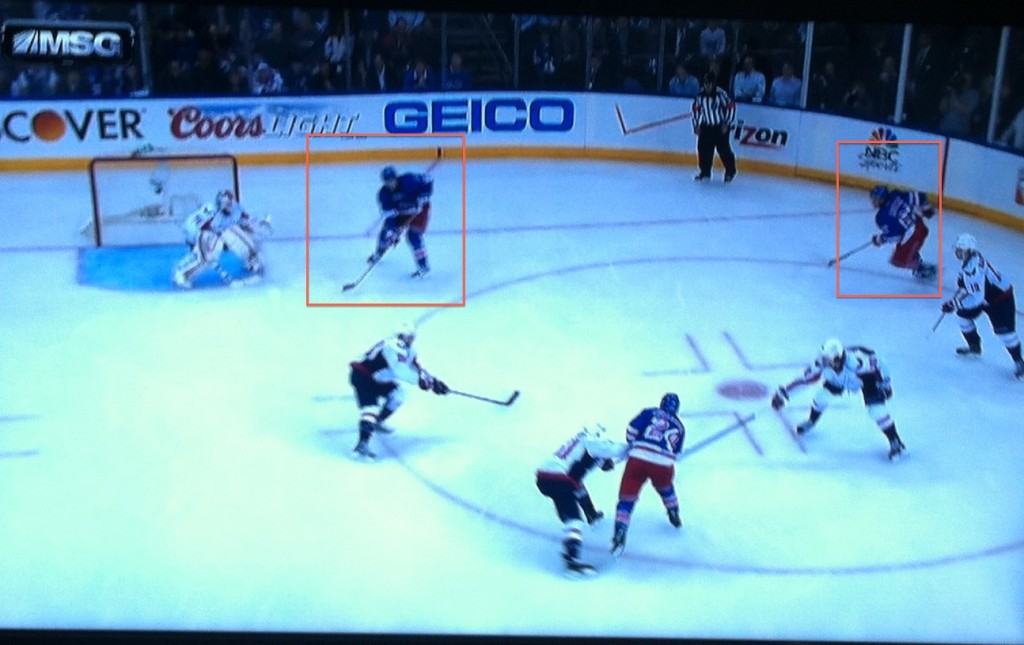 Two behind the defense.

Carl Hagelin forced a Caps turnover in the offensive zone where Ryan Callahan picked up puck, and got it to Derek Stepan with Hagelin behind the defense at the goal line. Stepan passed the puck to Hagelin at the corner for a touch pass right back to Stepan for the goal into the empty net.

Brad Richards lost the defensive zone draw, which led to two shots on goal for the Caps, both from the point. The problem here is that the second one, from Karl Alzner, eluded Lundqvist. It looked like there was a combination of a screen and a deflection in front. It looked like it hit Perreault in front and deflected past Hank. No picture on this goal because this one appeared to just be bad luck.

As mentioned above, these were two huge wins at home for the Rangers. This is a club that hasn’t been at full strength at all during this season, and they still managed to get both games at home. This is now anyone’s series, and with Hank in net, the Rangers have as good a chance as ever to take this series.