This was a wildly entertaining game tonight at Madison Square Garden. The Capitals came hard down low and created a lot of pressure on our d-men. Hank had to make some strong saves early and often to keep the boys in the game. For the Rangers, we were strong on the boards and were able to make plays all over the offensive zone in the 2nd half thanks to some very key pinches by our defense.

With four hard fought goals tonight for the Rangers, hopefully this is the spark that gets their 5-on-5 offense back where it needs to be. Although the Rangers were just 1 for 6 on the power play, I thought we looked much better in that regard. John Moore in particular was very decisive on the blueline and he was able to get hard, low shots on net. That’s all you can ask for at this point.

On to the goals…Dave’s got the first half… 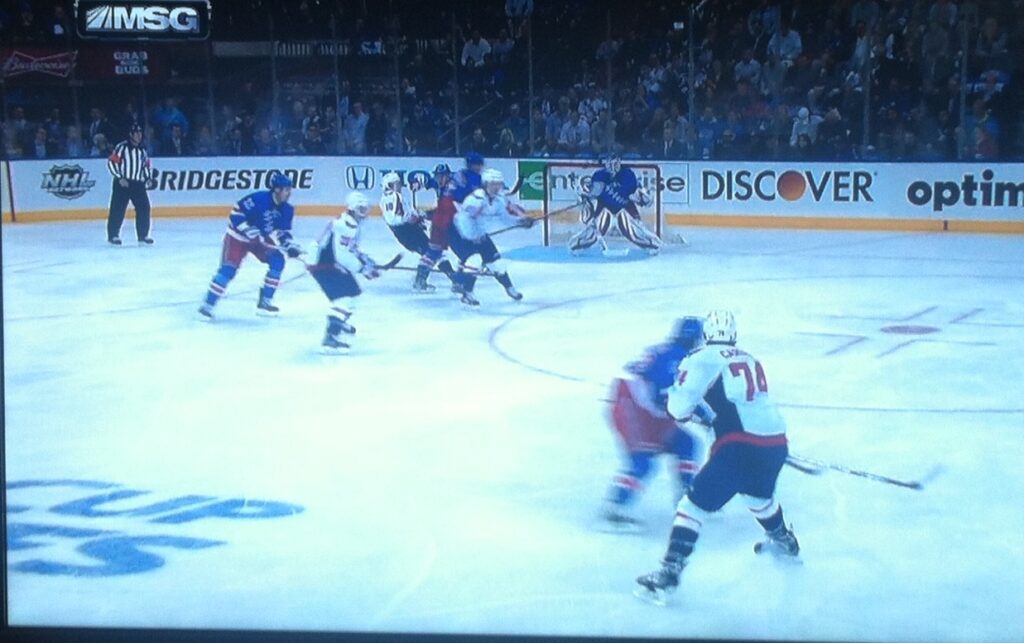 Nothing can be done here. Hockey happens.

This was a tough goal to swallow. The Rangers really dominated the first four minutes of play, including some good chances on the powerplay. Once the powerplay was over, the Caps tilted the ice a bit and cycled the puck well in the zone. The Caps eventually get the puck to John Carlson who wrists the puck high on net from the point. The Rangers had everyone covered, but Nicklas Backstrom was able to get his stick free for a deflection. Honestly, it was a great deflection. 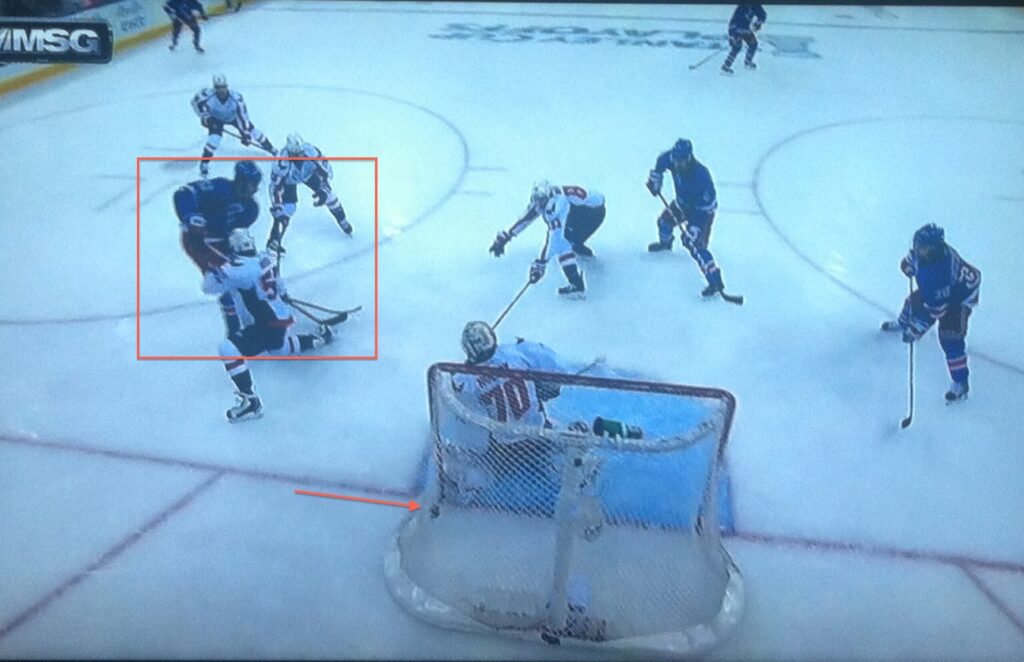 Yes you saw this correctly. It was a “power play” goal scored by Brian Boyle (the goal was scored the second the powerplay ended). With one last rush on the powerplay, Michael Del Zotto led the rush and got the puck to Derick Brassard at the blue line. As Brassard was pinned on the boards by Jack Hillen, Boyle came over to the boards to provide some puck support. Brassard chipped the puck to Boyle, who drove to the net and slipped the puck past Braden Holtby. This is one that Holtby probably wants back. Green also didn’t attempt to challenge. 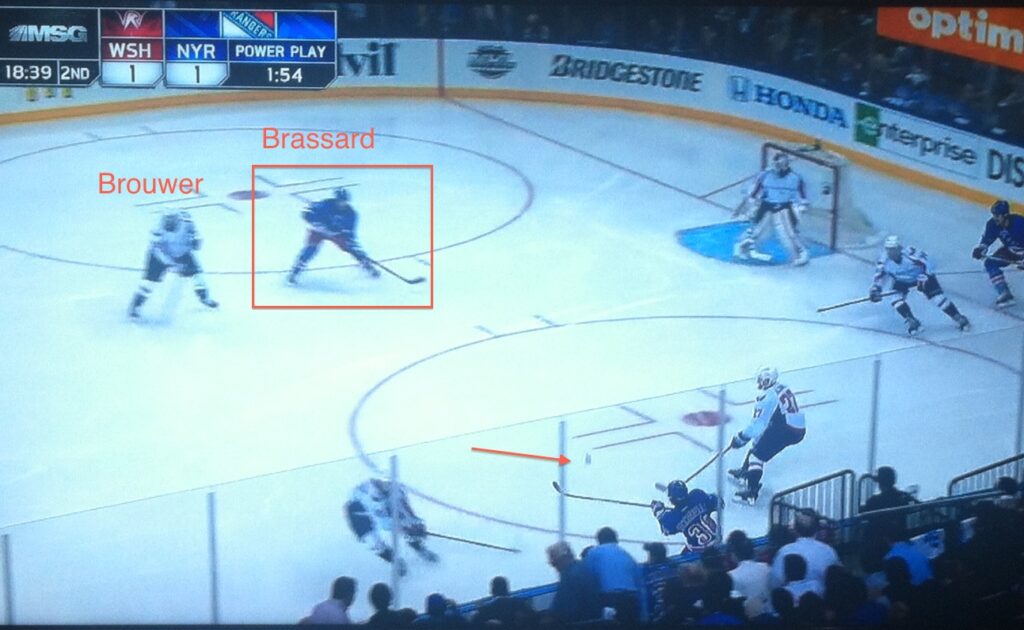 The Rangers score again on the powerplay. This time it actually counted as a powerplay goal. Boyle won a key face off and the Rangers got the puck deep. The
puck eventually worked to Mats Zuccarello at the half boards. Brassard bolted for the open ice in front of the net and Troy Brouwer failed to pick him up. Once Zucc hit him with the pass, Holtby didn’t have a chance. Turning it over to Suit now for the 2nd half. 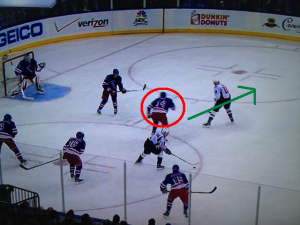 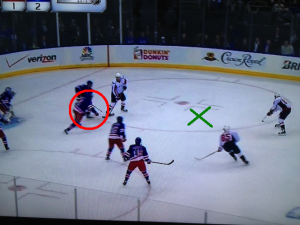 Apologies, I know this looks ugly, but two things happened on this play that needs to be addressed in two separate photos. In the first picture Pyatt has his back turned to the play and instead of taking the green route to the point, he heads low to the slot where Dan Girardi already is.  Photo two shows the missed coverage. Pyatt (circled in read) has no one. He should have been at the green x trying to block that shot, but instead comes too low and screens Lundqvist. After the goal he looked at the ceiling. I think he knew that one was on him.

John Moore times his pinch well and keeps the puck in the zone, finding Pyatt on the boards. Here’s where the Capitals make a critical mistake — a mistake I warned about prior to the series when talking about their defensive zone overload strategy. So pretty much the entire Capital squad came to the boards when Pyatt had the puck. Life of Pyatt works the puck down low to Brassard, everyone bites on Brass and he’s able to find Asham wide open in the slot. Asham finishes with that strong snap shot of his.

This was a tough goal. Off the draw Jack Hillen fired one through traffic and the puck deflected off the knee of Beagle and in. The puck changed speed and direction and was just a bad break for Hank. I would have liked to have seen Boyle win that draw in the DZ, but what can you do? Apologies for the lack of photos here, replays were just a bit too blurry for what I wanted to highlight. 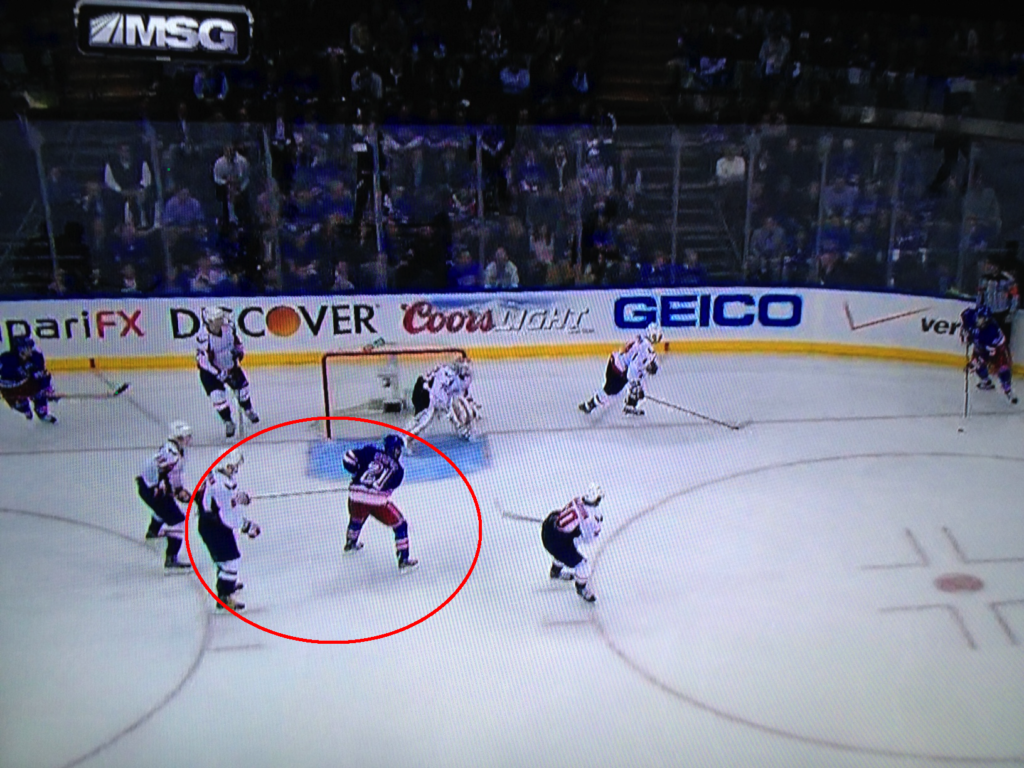 It’s the little things in hockey that sometimes help you score and prevent goals. This goal was an example of both. For us, the little thing was McDonagh making a great effort to keep the puck on their side of the blueline with not an inch to spare. That’s tough to do on its own, let alone when the Caps are coming hard with high zone pressure. McD makes the keep and then stickhandles the puck around coverage and feeds MZA below the goal line. MZA hits Rick Nash in the right corner. Nash finds Stepan through the seam for a backhanded tip in.

The best part about this goal was Ovie’s half ass attempt to defend Stepan (circled in red). Try a little harder next time Alex.

In the end the Rangers were able to hold on to the lead by a thread. The game opened up a little bit more than my liking, but I guess sometimes you got to lighten up a little on defense in order to get your offense going. I think we all know the boys needed that. One down, three to go. See you Wednesday.