The Rangers came out in Game One and were absolutely dominated by the Caps. The Rangers may have taken more shots on goal, but do not let that mislead you. The Rangers were never in control of this game, and took several sloppy penalties early on (the refs were bad all around for both teams, but the Caps capitalized, the Rangers didn’t). Luckily, this was just one game of a seven game series. On to the goals: 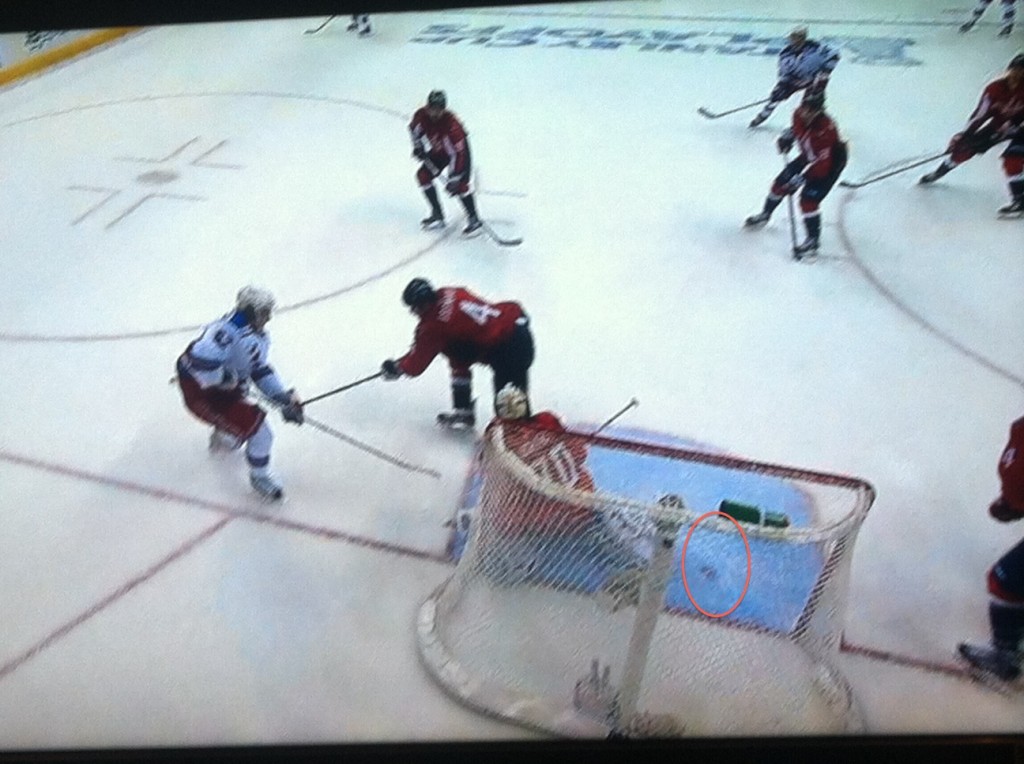 This is what happens when you throw the puck at the net. Carl Hagelin attempted a wrap around, and the puck went in off John Erksine’s skate. Nothing Braden Holtby could do. 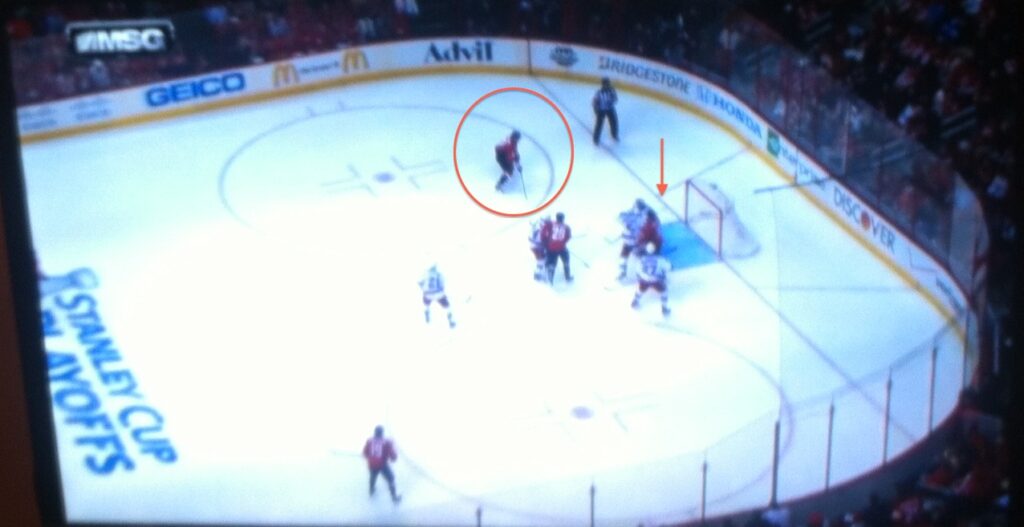 Lucky bounces go both ways, but so do bad calls.

The Caps were on the powerplay after Arron Asham delivered a legal hit and was inexplicably called for charging (to be fair, the refs were awful on both sides). The Caps worked the puck to the point for a shot by Mike Green. The shot went wide, unsure if that was by design or by accident, and Alex Ovechkin, who charged the net the minute the shot was taken, took advantage of a long bounce off the boards and put it in the empty net. 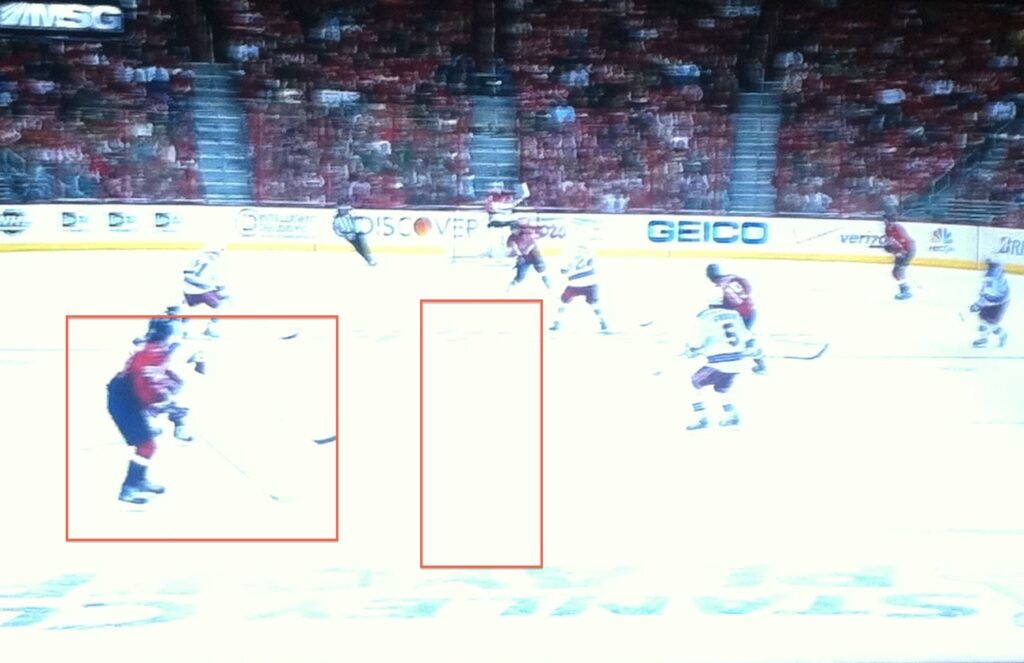 Look behind you. Also, that’s a big passing lane.

Marcus Johansson somehow found a spot behind Dan Girardi and Ryan McDonagh, who fails to utilize swivel-heads to spot him.  Steve Oleksy hits him with a pass, and Johansson is sprung on the breakaway. Rangers need to be more aware of who’s behind them. (Sorry about the bad picture.) 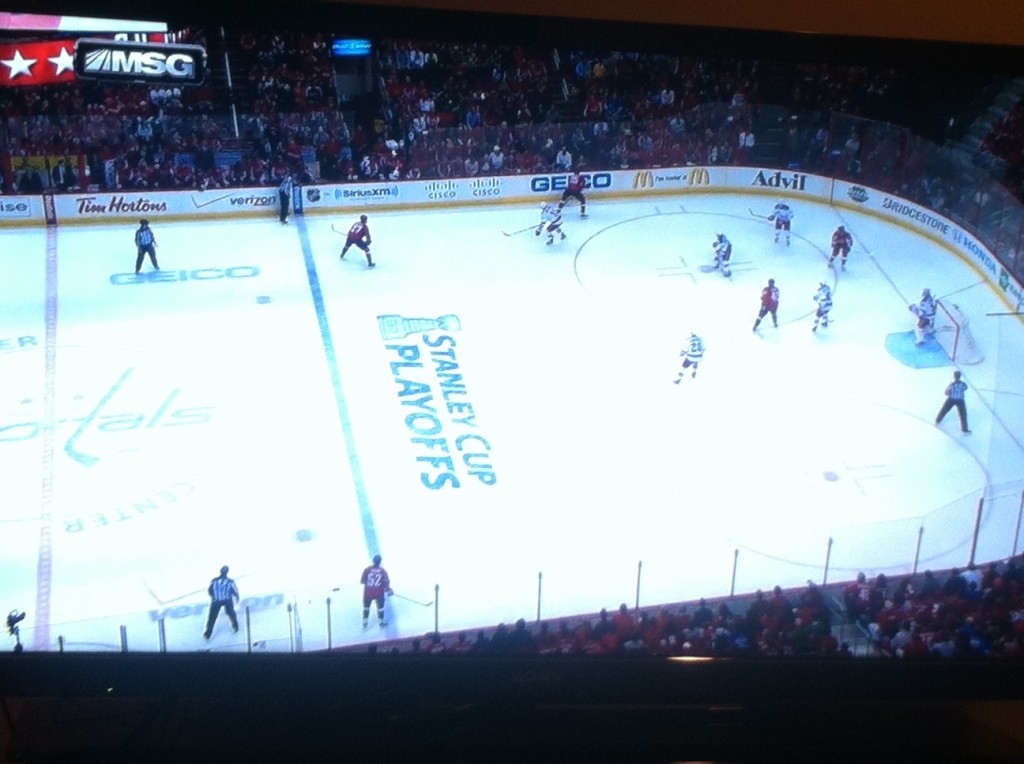 No idea how this went in.

The Caps had a good cycle on this shift, and Jason Chimera got the  puck at the half boards, twirled, and shot. Hank didn’t see the shot, and didn’t even realize it went in. He wants this one back. Honestly, I think we are all confused as to how this went in.

I have to address the John Moore non-goal. Physics says this is a goal, since 75% of Holtby’s body is in the net itself, the puck winds up in Holtby’s glove, and the glove is in the net and actually hits the netting. But, the problem is that you can’t see the puck on the replays, hence no goal. There is no problem with the call of no-goal, since the call on the ice was no-goal and the replay was inconclusive. It is what it is.

This series is a long way from over, but the Rangers did the exact thing they couldn’t do this series: They took penalties. When you take penalties, even if you kill them, that’s two minutes where you can’t generate offense. The Rangers are the better five on five team, but they played half a period on the penalty kill. That’s not a recipe for success. They will need to salvage a split on Saturday afternoon.