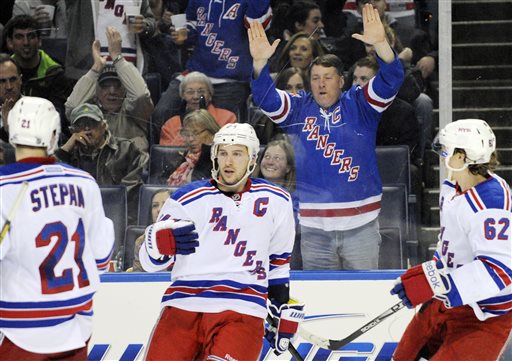 The single most important line this series (AP Photo/Gary Wiepert).

As Game 1 nears, we have covered almost every aspect of how the Caps and the Rangers will match up against each other. The one thing that hasn’t been covered is the particular line matchups that Adam Oates will deploy against the Rangers, particularly in Games 1 and 2 where he has the last change. As Suit pointed out last season, getting the right line matchups can be critical to a team’s success, and there are certain pairings we should expect the Rangers top guys to see as they play the games.

Per Left Wing Lock (courtesy of JP of Japers Rink), the Caps lines have been rather static in their formation of late: Alex Ovehckin-Nicklas Backstrom-Marcus Johansson, Troy Brouwer-Mike Ribiero-Martin Erat, Jason Chimera-Mathieu Perreault-Eric Fehr, Aaron Volpatti-Matt Hendricks-Jay Beagle. Since Joel Ward is likely to be back in the lineup, expect him to slot in for Fehr on the third line, with Volpatti coming out of the lineup and Fehr moving to the fourth line. On defense, you have Karl Alzner-Mike Green, John Erksine-John Carlson, and Jack Hillen-Steve Oleksy.

It is safe to assume that one of Rick Nash or Derek Stepan will draw the Erksine/Carlson combination, and the smart money is on Nash here. Erksine and Carlson have been the Caps top shutdown pairing all year, and it makes sense that they would draw the Nash assignment. This especially holds true when Nash is on a line with Brad Richards.

Where things get interesting is which pairing gets the Stepan line. This line is incredibly fast, so you have to wonder if the not-so-defensively-sound Green, who is on the second pairing with Alzner, gets that assignment. If the Erksine/Carlson duo is effectively negating Nash/Richards, then this is a very favorable matchup for the Rangers. Alzner is pretty solid, but Green has the potential to be an unmitigated disaster of a matchup against Stepan/Hagelin/Cally.

Another possible scenario, again assuming that Erksine/Carlson get Nash/Richards duty, is that Oates doesn’t matchup against Stepan, meaning the Hillen/Oleksy combo gets some time with them. In that case, the rookie Oleksy has the potential to be exploited, although Hillen has been pretty good all year for the Caps (when he was healthy).

Both possible scenarios open up another possible mismatch with the Rangers’ third line. Derick Brassard seems to have regained some confidence, and Taylor Pyatt has been hot lately. Chris Kreider is the real wild card here, as he has the speed and skill to really exploit defensive mismatches, especially against defensemen who aren’t swift skaters. The common theme here is that the Rangers forwards matchup fairly well against the Caps defensemen.

Moving on to the forwards, Oates is going to do everything he can to keep Ovechkin away from Ryan McDonagh and Dan Girardi, which means attempting to exploit Michael Del Zotto/Anton Stralman and John Moore/Steve Eminger. Torts can severely limit Ovechkin’s effectiveness by just deploying McDonagh and Girardi on every defensive zone draw. If Oates is adamant about keeping Ovechkin away from them, then he will limit how many offensive zone starts he gets.

The problem then lies with the Caps second line of Erat-Ribiero-Brouwer, which is a very good second line. If McDonagh and Girardi are to get the lion’s share of Ovechkin duty, then it’s safe to assume that MDZ/Stralman get this line. They are prone to gaffes, but this isn’t exactly a terrible matchup for the Rangers, especially if they can manage to get the Stepan line, of which all three are great defensively, out against them.

The third and fourth lines for the Caps have some offensive potential, and not nearly on the same level as their top two lines. Ward’s return can create some havoc, but the pairing of Moore/Eminger should be able to slow that line down a bit. Forward match ups (note: Brassard/Pyatt) will be key to shutting down the depth forwards for the Caps.

At even strength, the Rangers matchup very well against the Caps. The newly added depth –even though it is relatively depleted with the Brian Boyle and Ryane Clowe injuries– opens up space for the Nash line and the Stepan line. The Caps don’t appear to have the defensive depth to match the Rangers, although execution will play a role. Of course, the key words here are at even strength. If the Rangers take too many penalties, then this will be a quick series.