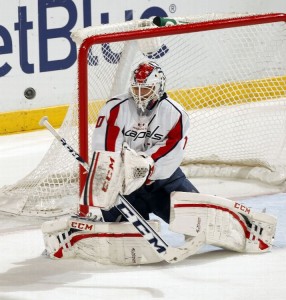 Well, it’s time for our annual Rangers-Capitals playoff matchup.  Since these teams met just twelve months ago, the scouting report I wrote on Holtby last season is still pretty applicable.  He’s had an extra half a season to acclimate to full time starter duties in the NHL, so there has been some evolution in his game.  I decided to change up the format for the guys I scouted last season; I’m going to consolidate four categories into two.  Being combined are general style and strengths, along with weaknesses and how the Rangers should approach the matchup.  Let’s get to it…

Holtby’s style hasn’t changed much, if at all, since last season’s scouting report.  He is still an extremely poised, athletic tender with solid instincts and vision.  He has near elite levels of lateral movement and recovery, with an absolutely lethal glove hand.  He has rounded his game out a little through this lockout-shortened season, specifically with blocking and rebound control.

In the playoffs last season, he was all hands and legs.  Generally, when a goalie’s saves are concentrated to their gloves and pads, they are losing peripheral inches on their positioning, requiring more acrobatic save techniques.  This year, Holtby has improved his over-movement to the point where he is catching pucks in the mid-section more frequently.  This is a product of allowing the puck to travel and “hit you”, as opposed to affirmatively attacking the puck with various parts of your equipment.

This has also had a positive effect on his rebound control.  With more shots settling into his mid-section, the less dangerous rebounds are ending up out in the slot area.  There could also be an equipment reason behind this.  Last season, Holtby was wearing a set of Reebok Larceny pads in the playoffs.  Aside from Ryan Miller and Semyon Varlamov, these pads were not very popular with NHL tenders.  For Holtby specifically, he seemed to generate long rebounds from far away and not have great control over difficult close range shots.  In today’s NHL, errant rebounds tend to end up in the back of the net.

This season, however, Holtby switched to the much more popular CCM EFP (Extreme Flex Pro) pads that many tendys are using.  Carey Price, Kari Lehtonen, Steve Mason, Jonathan Bernier and several others have adopted CCM’s hybrid model this year.  These pads have garnered a reputation for quality feel and rebound control.  Whether or not this has been a major factor for Holtby is hard to tell, it could just be the maturation of his game.

Weaknesses/How the Rangers should approach the matchup

Holtby’s greatest asset is also his greatest weakness.  He was indoctrinated by fire into last year’s playoffs, where adrenaline and a good run of form can carry your from first round underdog to playoff hero.  The regular season is a much different animal.  Consistency is much tougher to come by over the long haul, and Holtby has experienced some growing pains.  He has developed a slight tendency to overplay lateral movement on odd-man rushes and other quality chances.

As we all know by now, Holtby’s athleticism is one of his more valuable skills.  But like many young goaltenders, he can become impatient and forget to allow the game to come to him.  This was a much bigger problem at the beginning of the season, but he has since settled into a nice groove and started to reign in some of the more aggressive tendencies in his game.

For opposing goalies who are not elite laterally, the strategy is to try and stretch them out east to west, and cause breaks in their blocking technique.  With Holtby that won’t necessarily help you, unless you add patience into the equation.  On plays that offer offensive Rangers a chance to wait out the possible over-aggressiveness of Holtby, it could be an exploitable weakness.  Give the overall lack of shutdown defensive players on the Washington blue line, those chances may well present themselves.

The other main option for the Rangers to focus on is traffic and getting pucks to the net.  Goalies always get into more rebound trouble when they have to fight to see the puck in traffic and could exploit Holtby’s historic lack of quality rebound control in this context.

If a goalie gets hot in the playoffs, sometimes, there’s nothing you can do.  Holtby has the raw ability to have that type of effect (as we saw in the Boston series last year), but his youthful missteps can still be exploited.  While having a couple high-intensity series under his belt is nothing but a positive, let’s not forget this is still a 23 year-old kid, still finding his way in this league.  He will absolutely be a handful, but he still has to outplay the regal gentleman at the other end of the ice, which is a tall order for any NHL goalie.