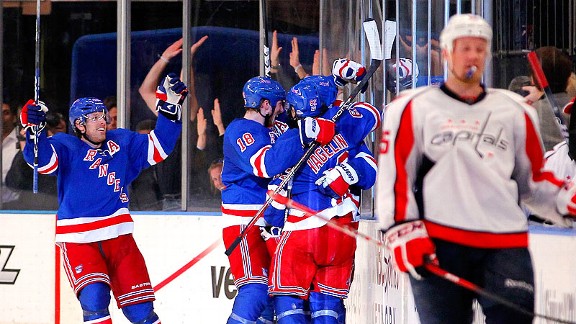 So for the 4th time in 5 years, the Rangers will square off against the Washington Capitals in the Stanley Cup playoffs. In that time, the Rangers post-season record against the Caps is 8-11. Although there have been some key personnel changes on both sides, not to mention three different head coaches in DC, the song remains the same. The Rangers have the best goaltender in the world, while the Capitals have the best goal scorer in the world. That formula always makes for some edge-of-your-seat hockey.

This year will be no different. To no surprise, the Capitals are again a goal-scoring machine. They rank 4th in the league with 3.04 goals per game. They also rank 1st in the league in power play conversion (26.8%). Interestingly enough, they’ve reached those heights while simultaneously being one of the best shot blocking teams in the league (ranked 8th in the NHL). Of course, you already know blocking shots doesn’t stifle a team’s offensive ability 😉

So what does this mean for the Rangers?

Last year the Rangers got to the Eastern Conference Finals on the skin of their teeth. They lacked roster depth both offensively and defensively so Henrik had to be his usual outer-worldly self. Post deadline, the Rangers finally have some roster depth at forward, but are still lacking a true power play quarterback.

This is obviously very different from the Capitals who have offensive balance up and down the lineup. Aside from the big five (Ovie, Backstrom, Ribeiro, Green, & Carlson), you have Troy Brouwer (listed at 6-3 215 lbs) who was on pace for a 60 point season after a career of being a 30-40 point guy. Marcus Johansson and Joel Ward were on pace for 50+ and 40+ point seasons respectively, also career highs. On the bottom six you have Perrault, Hendricks and Chimera who can all put up points in limited minutes.

As for the Rangers, it’s tough to know if this recent offensive explosion (3.6 goals per game in April) has to do with feasting on non-playoff teams or if their goal scoring has finally caught up to their shot production and puck possession metrics, which have been among the league’s best all season. More worrisome is the Rangers power play which although has produced more chances in recent weeks, the lack of finish from our blueline — only Staal has a PP goal — is a major negative.

Although the Capitals and Rangers play similar defensive zone strategies (low zone collapse & the overload), their execution of said systems isn’t comparable at this point. The Rangers make mistakes in their own zone, all teams do, but the commitment to play below the dots is always there.

The Capitals blueliners aren’t great defensively, but they’re capable in their own end zone. Their forwards on the other hand are suspect defensively. They aren’t always committed to backchecking after turnovers and their over-commitment along the boards leaves them prone to blown coverages. Their 27th ranked penalty kill speaks for itself.

In my opinion, the Rangers have a clear edge in team defense. If we can get Staal back at any point during this series, that edge becomes a wide margin.

I have nothing but respect for Braden Holtby. He’s a solid young goaltender and you don’t put up a .920 SV% on the Capitals by having puck luck. Still, you don’t need me to tell you Henrik Lundqvist gives us an advantage. There is no goaltender in the Eastern Conference that gives their team an edge over the Rangers in this department. Rask, Reimer, and Holtby are all great young goaltenders, but Hank is still King.

This is going to be a close series and will likely go to the brink. If you’re a Rangers fan, expect the Capitals to pin us in our own end zone for long periods of time. If you’re a Caps fan, expect the Rangers to capitalize on some of your player’s brain farts. Everyone will need to hold fast for this one. This series is likely going to see seven games.