The second period was the period where the Rangers finally broke through on Dan Ellis, scoring two goals in 30 seconds –one on the powerplay– and adding another powerplay goal 10 minutes later. Those three goals were more than enough for the Rangers, as Henrik Lundqvist was spectacular, especially in the closing minute of the second period. Hank eventually got beat in the third, but he was absolutely stellar in this game, making 48 saves in the process. He stole this for the Rangers, and this is the perfect time for him to begin doing so. On to the goals: 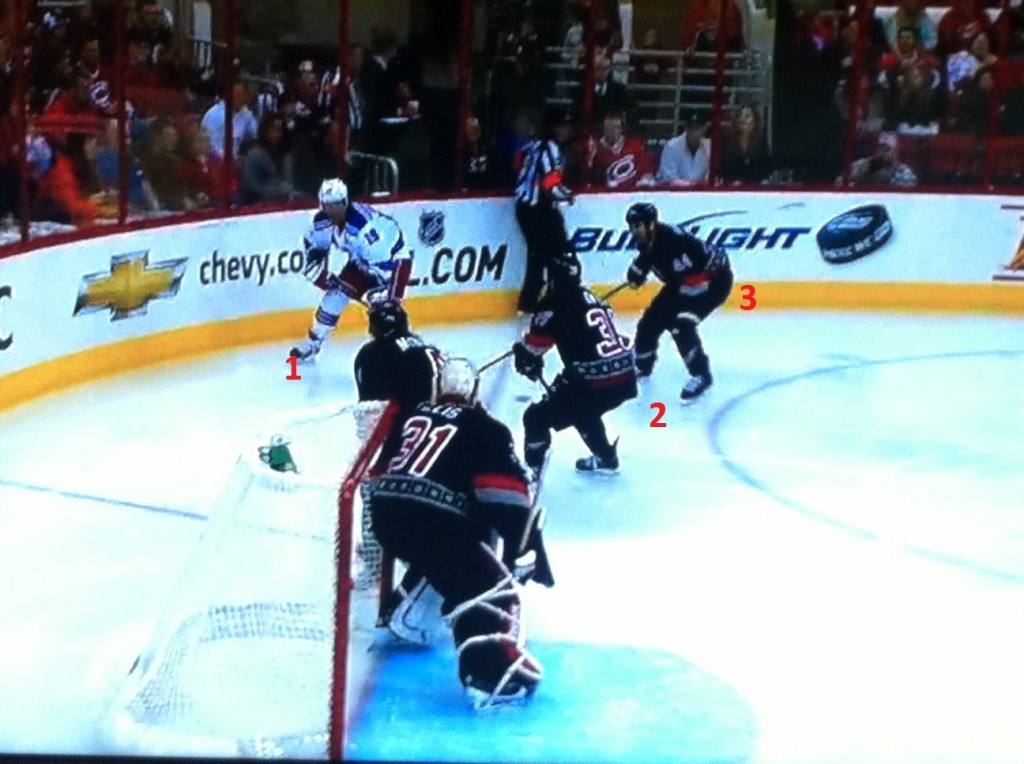 With the Rangers on the powerplay, Ryane Clowe made a good play to stay onside after Brad Richards’ pass was a bit behind him on the rush. Once in the zone, Clowe worked the puck deep to the corner to Richards. Richards drew Jamie McBain, Patrick Dwyer, and Jay Harrison to him. When one guy can draw three penalty killers, it means there’s only one guys left, meaning someone is open. Richards found Derek Stepan in front all alone for the goal. 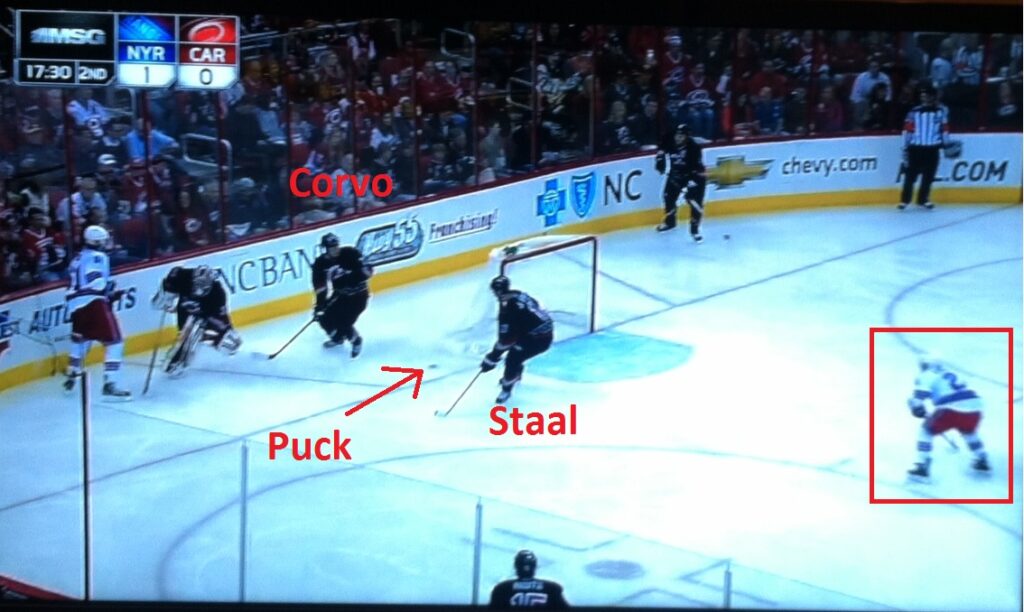 This was just a silly play. Rick Nash forechecked and forced Dan Ellis –who was in no man’s land– to turn the puck over behind the net. Nash got the puck to Ryan Callahan for the empty net goal. The weird thing about this goal was that both Joe Corvo and Eric Staal appeared to have opportunities to intercept the pass to Cally, but neither did. 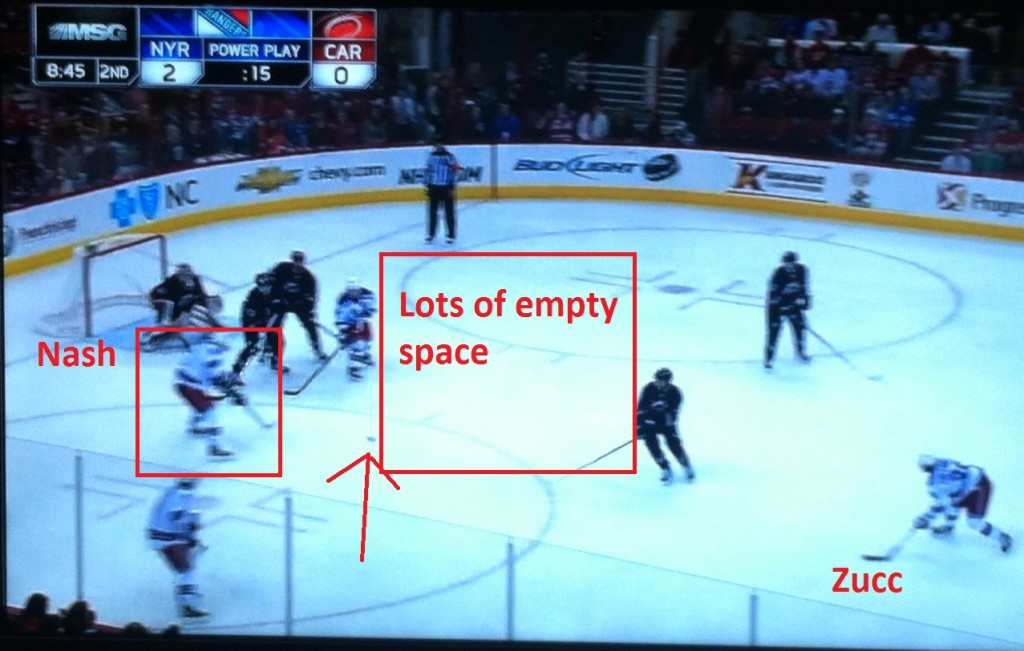 Hockey 101: Drive to the empty space.

Another powerplay goal? Yup. Another powerplay goal. For the second straight powerplay, the Rangers had great puck movement. Once the Rangers gained the zone, Nash drew attention to himself before making a nice pass to Mats Zuccarello. Zucc faked a shot, and just waited for Nash to get to the high slot. Zucc hit him with a pass there, and Nash just waited, turned, and shot it past Ellis. 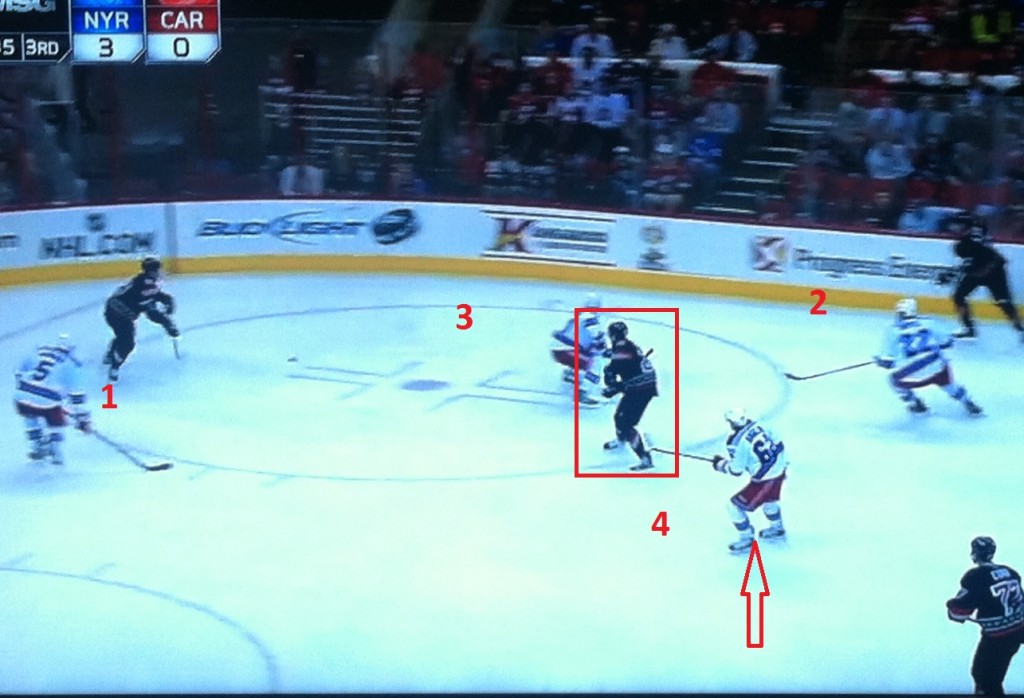 This one began with a Brian Boyle turnover at the Canes blue line, as Jeff Skinner was able to get his stick on the errant pass and transition it into a rush up the ice. After the Canes gained the zone, the Rangers weren’t exactly outnumbered. They had four guys back on the three guys (Staal, Skinner, Zac Dalpe), but Dalpe found open space between Dan Girardi, Ryan McDonagh, and Carl Hagelin. Dalpe was Hagelin’s man in this scenario, and you’d like to see a better backcheck there. But that said, those were two perfect passes and a great shot by Dalpe. Credit Dalpe for cutting to open ice and putting himself in a position to shoot.

Brian Boyle empty-netter. He did a good job forechecking, and eventually caused Marc-Andre Bergeron to turn the puck over right in front of his own empty net. Boyle just tapped it in.

These were two huge points for the Rangers. The Islanders won, the Leafs won (beating the Devils in the process), the Caps won, and the Jets won. The Rangers avoided the drama of losing when every other team competing with them for the final playoff spots won. The win gives the Rangers a 3-0-1 record in March, taking and seven points out of eight in the process.