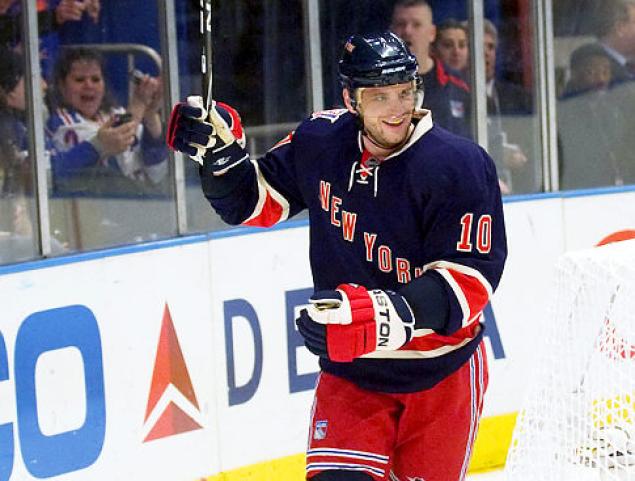 Deadline day was a snoozefest until after 2:00, when all hell broke loose.  The Rangers have agreed to send Marian Gaborik to the Columbus Blue Jackets along with D Steven Delisle and D Blake Parlett in exchange for C Derick Brassard, RW Derek Dorsett, D John Moore and a sixth-round pick.  Gaborik has agreed to waive his no-trade clause to complete the deal.

Brassard, 25, has seven goals and 11 assists in 34 games this season including a goal and six assists on the power play.

Dorsett, 26, had three goals and six assists in 24 games and was -11. He is out for the rest of the year after breaking his clavicle in early March.

Moore, 22, has played in 17 games, recording one assist.  He was -23 last year.  Prospect guru Corey Pronman had this to say about Moore: “a high-end skating defenseman who doesn’t have a ton of upside, but can make plays in both ends. 2nd pairing type.”  Moore was originally drafted 21st overall in 2009, two picks after Chris Kreider and two ahead of Tim Erixon.

Gaborik, as you all know, has been mired in an awful slump this season and has clashed frequently with coach John Tortorella.  He has one-year, $7.5 million left on his contract.

Brassard is signed through next season with a cap hit of $3.2 mullion.  Dorsett has two more years on his deal at $1.63 million.  Moore has one season remaining on his ELC at $965k.

So between the Rick Nash trade and today’s trade, Columbus received Gaborik, Brandon Dubinsky, Artem Anisimov, Tim Erixon, Blake Parlett and a first-round pick from the Rangers in exchange for Nash, Brassard, Dorsett, Moore, a conditional third-round pick and a sixth-rounder.