With Zuccarello in, who will sit among Boyle, Pyatt, and Powe? 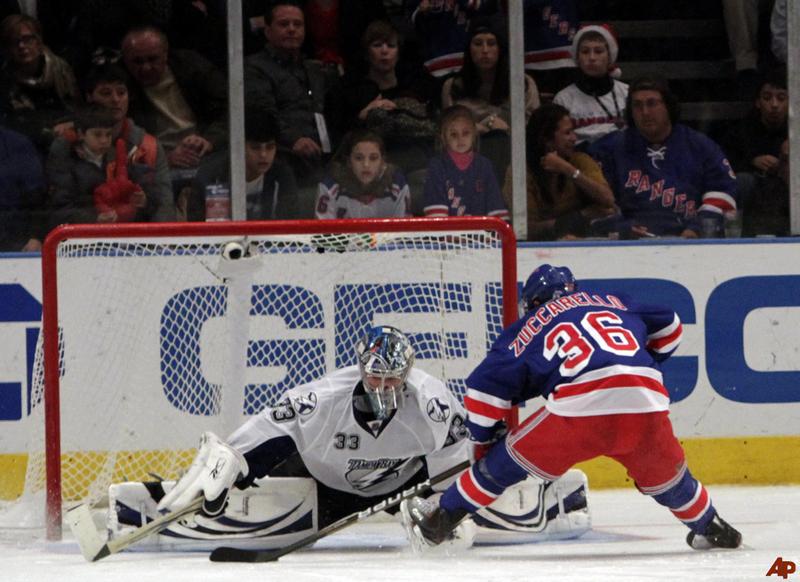 In case you missed it, the Rangers re-signed Mats Zuccarello, who will likely join the club within the week. Zuccarello will bring some stability and scoring to the bottom-six, something that is desperately needed. The addition of Zuccarello will lead to some lineup changes. When all the pieces fall into place, the odd-man out is not who you might think it is.

It’s been very clear that the organization wants offensive talent to play alongside J.T. Miller on the third line, so it’s a logical assumption that these two will see some ice time together. Since Zuccarello is rather flexible and can play either wing, that opens up a few options for the Rangers. If Torts wants to try Miller at center, then the Rangers can try either Marian Gaborik (RW) or Chris Kreider (LW). Each line will have a lot of skill and speed, but the downside is that the trio will be defensively inept. The rest of the top-six remains the same.

With Miller at center, there are two side effects. Either one or both of Brian Boyle and Taylor Pyatt need to be pushed down to the fourth line. That means Kris Newbury will be returned to Connecticut, and one more roster player will need to come out of the lineup. This is where things get tricky. With Newbury back to CT as a given, the Rangers will have four players (Pyatt, Boyle, Arron Asham, Darroll Powe) who would be competing for the fourth line spots.

Asham isn’t likely to be scratched, he’s been effective for the Rangers. The other three, however, have been severely underachieving and could see themselves on the chopping block. Boyle has seen his time as a healthy scratch and has a single goal on the year. Pyatt has scored just once since January 24. Powe hasn’t scored at all. Of the three, Powe and Boyle are the most defensively sound, Pyatt has the best hockey IQ, and Powe is the best skater. It is truly a conundrum.

What may wind up being the deciding factor is the ability to kill penalties. Powe and Boyle are two of the main penalty killers on this team. With Halpern gone, even more of the responsibilities will fall on these two. Pyatt is the only one of this trio that does not kill penalties. Pyatt is also the only one who cannot play center.

All of this gets blown up if the coaching staff is hesitant to put Miller at center. It means Boyle stays as third line center with Miller and Gaborik, and Zuccarello gets moved to the fourth line, likely with Asham and Powe (or Pyatt). That just creates the whole Zuccarello mess from the past years, and likely won’t end well for him or the club. The third line is still weighed down offensively by Boyle, and the fourth line is thrown together with mis-matching skill sets.

If this becomes the case, then a trade would like be in the works. At that point, there’s way too much speculation to even go into all the possibilities. Between the Gaborik rumors, and the logical reasoning about Boyle and Pyatt, there’s too much information there to possibly outline all the scenarios.

Using the current personnel, the Rangers are best served trying out a top-nine that includes Zuccarello and Miller, and subtracts Pyatt and Boyle. The next few days are going to be very telling for the organization, specifically about who the coaching staff trusts.