One of the biggest weaknesses the Rangers organization has faced the last several seasons has been a mediocre power play. Not since the 2009-10 season have the Rangers finished in the top half of the league in PP conversions. This season in particular, the Rangers power play was a disaster early on. With that said, there was quite a bit of turnover in the offseason, a truncated training camp and plenty of injuries. Just when the Rangers were looking to turn it around in mid-February, Rick Nash went down with an injury and missed four games.

Once Nash returned, not only have the Rangers been playing great 5-on-5 hockey, but the power play has improved as well. As Dave mentioned yesterday, prior to the Rangers win streak, they were sitting dead-last in the NHL with an 8% power play. Currently they are at 15.8% overall (22nd in the NHL), 17.6% at home (20th in the NHL) and have doubled their efficiency over the past seven games. As Dave reported, their 27% efficiency rate over this streak is good for second in the NHL.

But can all of that be attributed just to Rick Nash’s return? Here’s what I’ve noticed. 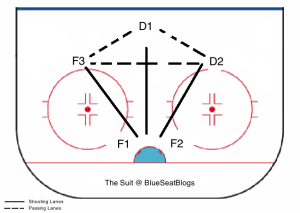 Prior to Nash’s return, the Rangers were exclusively rolling out an umbrella formation (seen on the bottom). Since Nash has returned, Sully has the Rangers rotating between an umbrella and a 1-3-1 formation. I believe this rotation of strategies was implemented to keep the players from being static. As I’ve written in the past, the umbrella power play requires some rotating of positions from the high players, as well as motion in the slot from the two players in the crease.

For some reason, moving screens and rotating didn’t come naturally from this setup. Now the Rangers first power play unit will alternate between the umbrella and the 1-3-1 forcing players to swap positions and responsibilities.

Switching to a 1-3-1 also changes the way the PK has to defend the slot. Against an umbrella, PK’s generally attack the points, almost playing man-on-man coverage. However, against the 1-3-1, which runs off the half-boards, PK’s tend to play a zone option or a collapsing box. By constantly switching formations, the opposition tends to over commit thus leading to defensive miscues.

The past few games PK’s have been collapsing in the slot leaving MDZ with room to wheel and rip shots from the point. As he starts getting shots through, they’ll attack him, but leave Nash open. If they decide to defend both, then they’re likely leaving Gabby open on the weak side, or one of the slot players like Cally or Stepan. Lots of options here. For more on the different power play strategies, read my post here.

So the Rangers power play is starting to hit its stride, but will this new strategy work long-term?

Who knows? The 1-3-1 really calls for a right-handed shot from that weak-side player. The graphic has a defensemen in that position, but it doesn’t necessarily have to be a d-man. It can be a forward, so long as they are able to one-time shots. Sully has deployed Richie in that position, as well as Gabby. The problem with Gabby in that spot is he really isn’t a guy who’ll crank slappers. Though Richie has that ability, he’s a lefty, so those shots generally come from the outside.

For now it seems to be working. We know this team can beat anyone 5-on-5. Torts has proven his 2-1-2 forechecking, black and blueshirt style of hockey keeps Lundqvist from having to face 15-20 scoring chances every night like he had to during the Renney era. But the prize will come with consistency and a dependable power play. If we can continue play the right way, the sky’s the limit.

Here’s some video showing the new power play at work.