I know there is a small, but vocal contingent of the blogosphere that will trash Tortorella when the team isn’t performing well and leave him alone when the team wins. Some people just look at the scoreboard and develop a strong opinion about the man and that’s all there is to it. Part of being a sports fan I suppose. However, what we try to do on this site is dig a little deeper.

When you peel back the onion a bit, one of the things I have come to appreciate about Tortorella are the less publicized tactics he uses to help win hockey games. Last season he changed up the Rangers neutral zone forecheck on the penalty kill, which aimed to create short-handed chances. This year he’s developed a new breakout designed to beat neutral zone traps. 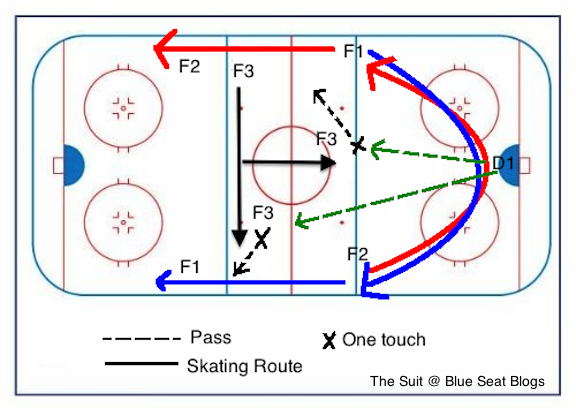 The image above is a simplified drawing of this new tactic Torts has implemented. The basic idea is that there are times when the opposition has elected not to forecheck and is sitting back in the neutral zone. Instead of trying to dipsy-doodle your way through a trap – which rarely works out – you’re coordinating a controlled breakout with set patterns. This helps to break the trap or at least cause defensive miscues.

For this play in particular, there’s essentially four things going on.

When everything works in tandem, generally an odd man rush will ensue because the defense has likely bit on F3 or the double swing. The Rangers don’t use this play every game, but when they do, it often results in a great offensive chance or a goal. I’ve seen this play garner both several times this season.

Here’s an example of when one of those instances pays off.