Could the Rangers’ start prompt a search for blueline help? 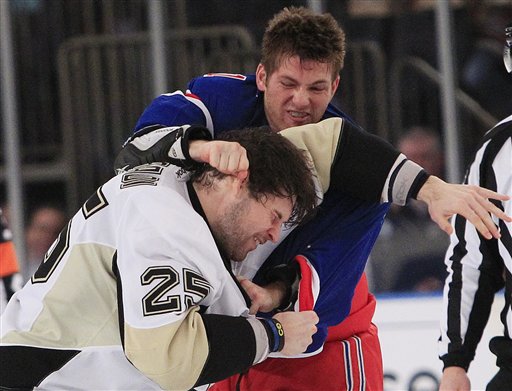 The irony of the Rangers unimpressive start is that this team could really benefit from Wade Redden on the bottom pair. His passing ability and experience would have been a boost to the bottom pair. Clearly though, that was never going to happen. All jokes aside, two bad losses doesn’t mean a general manager should blow up his roster and beg for help elsewhere.

However, maybe the two losses have reinforced (or exposed) a need in the eyes of Glen Sather. Countless twitter fans, media types and pre-season’ predictors expressed varying levels of concern at the bottom end of the Rangers blueline depth. Basically the concern was – is there any?

Stu Bickel has been horrible thus far, Matt Gilroy is surely just an emergency measure (based on his at best mediocre play with the Whale), and Steve Eminger would have the same problem shaking off the rust that the current defense corps is encountering. So will Sather be tempted to look for an upgrade outside of the organisation and is it needed?

Don’t count on any help coming from the AHL. The sole legitimate prospect on the blueline – Dylan McIlrath – needs serious game time at that level before being a viable option. He’s unlikely to be seen at the Garden this year. Don’t count on Bickel suddenly transforming into Jeff Beukeboom overnight either. The current defense will only improve through practice, players playing to their talent levels, and through the forwards getting on the same page as their defensive colleagues. Basically, if the organisation isn’t happy with what’s on the blueline now, they may well start to look for alternatives.

Two losses does not spell disaster, nor does playing Stu Bickel, or one of the current healthy scratches.  This defense may very well be one unfortunate injury/absence from a potential panic situation. This team has a ton of talent, solid depth (generally speaking) and an all world goaltender ready to be the backbone once again. Just don’t expect Sather and co. to be idle. There’s every chance the organisation is looking at options, and so they should.