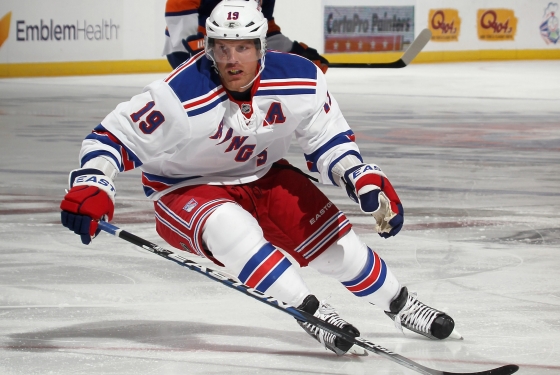 Is Richie the most important Ranger outside of Lundqvist?

The hockey world is back up to full speed, and it’s hard not to be excited. See you soon New York; my annual regular season trip is now in the planning phase. Cannot wait to be back at the Garden, something I’m sure we all are excited for. Musings Time!

Pat Leonard of the NY Daily News reported that the goalie starts for the Rangers will continue like last year’s split which would mean Hank getting ‘only’, (approximately) 36 starts, which is exactly what Suit predicted a couple of weeks ago. That’s bad news for you fantasy hawks that drafted the King in the first round of your drafts but good for Henrik in terms of staying fresh for the playoffs. The Rangers are blessed that they’re able to lean on a back up of Biron’s quality.

I can’t express enough disappointment that Chad Kolarik got waived this week. Clearly he wasn’t a serious option for the Rangers management even though he’s always produced at the AHL level when healthy.

The Rangers added Brandon Mashinter yesterday and as Dave suggested it’s a minor deal but he does add size, some offensive ability  and should help make the Whale nastier. A friend of mine is a Sharks fan and while he said his NHL upside is limited he did say that Mashinter was good defensively and unafraid to take on anyone in a fight (including George Parros a few years back). Could be an option for a bottom six role.

Given the compressed schedule/abbreviated season news that the Rangers will travel the second fewest miles in the league is worth noting. The Rangers had a long year last season were running on empty at the end. Anything that can give them an edge toward the Cup finals has to be a good thing.

Stu Bickel. The more I saw of him last year the less I liked yet he’ll have an important role to play this year given the lack of reliable depth behind him including the lack of NHL readiness of Dylan McIlrath. I think Bickel has some potential but a limited ceiling.

Wade Redden. That is all.

Food for thought (and I’m not against Mike Rupp, just his contract): Had the Rangers not brought Rupp on board would they have kept Brandon Prust (A far more accomplished Ranger)?

I drafted Brad Richards in a fantasy league. I really hope he’s a point per game player this year and with his potential line mates think he has a great chance to do just that. Being a Ranger fan and a Richie ‘owner’ I’d consider that a win-win scenario. Richards having a strong regular would be huge and you could argue he’s a more critical part than Nash or Gaborik.

Not sure there are many teams with a tougher start to their seasons than the Rangers with Boston and Pittsburgh first up. Coach Tortorella will know quickly, where his team is at and what he’ll need to address.

The TSN top 50 list was released this week and the Rangers had four in the top fifty led by Lundqvist at 15. I agree with the general (Ranger fan) consensus that Gaborik – third in the league last year in goals don’t forget – should be rated higher than 45. Brings us to the theory: has Gaborik ever received the league-wide respect he has deserved?